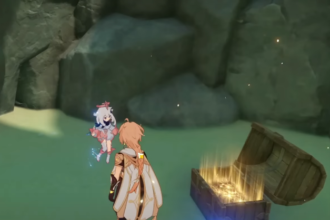 In this guide, I will share with you how to get all 6 chests from the Treasure of the Skerries World quest easily.

Do note that you can only get this quest after completing all the main event quests.

Teleport to Twinning Isle north waypoint and head southwest towards the Waverider waypoint.

Sail northeast towards the small island.

Talk to the night raven statue.

Jump to the lower platform of the cave and defeat all the enemies.

Use an Anemo attack to activate the windmill to glide up and talk to the night raven again.

Climb up the mountain and talk to the night raven beside the wave rider.

Summon a wave rider and sail according to the night raven’s instruction.

Head northwest and sail towards the right side of the rock make sure to slow down when you are near the night raven.

Turn right and sail towards the left side of the rock.

Sail directly through the rock in front of you.

Turn right and sail through that small rock.

Turn hard left towards the left side of the rock with the night raven.

Sail northeast, and you will reach the island.

Go up the mountain along the pathway, and you’ll find a common chest.

Teleport to the nameless island waypoint north of Broken Isle. Summon a wave rider and sail northeast toward the quest location.

Adjust the orientation of the machine beside the harp three times.

Adjust the orientation of the mechanism on the left side twice.

Climb up the mountain and adjust the sixth mechanism twice to point downward.

Interact with the harp to remove the seal on the chest.

Collect the common chest to obtain the clue.

Teleport to Klee island waypoint and head southwest towards the quest location.

Climb up and jump into the hole.

Remove the breakable rock and collect the common chest to receive the clue.

Go back to your wave rider and sail southeast until you see rocks with whirlpools around it.

Collect the chest, and you will receive another clue.

Climb up the rock and defeat the two electro slimes in the cave to remove the seal on the chest.

Collect the common chest and teleport to the Kazuha event waypoint.

Interact with the bonsai to rearrange the setup. Select the second option for both left and right sides.

Teleport to Pudding Isle waypoint and glide southeast towards the tree with red leaves.

Collect the quest item right under the red leaves tree.

Teleport to the Kazuha event waypoint. Interact with the bonsai to rearrange the setup. Select the second option for the left side and the third option for the right side.

Teleport to the Pudding Isle waypoint, head southwest, and interact with the glowing spot at the end of the wooden platform.

Teleport to the middle island waypoint and summon a wave rider.

Sail southeast towards an area with 8 whirlpools and a bubble. 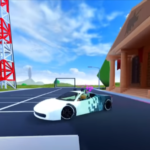