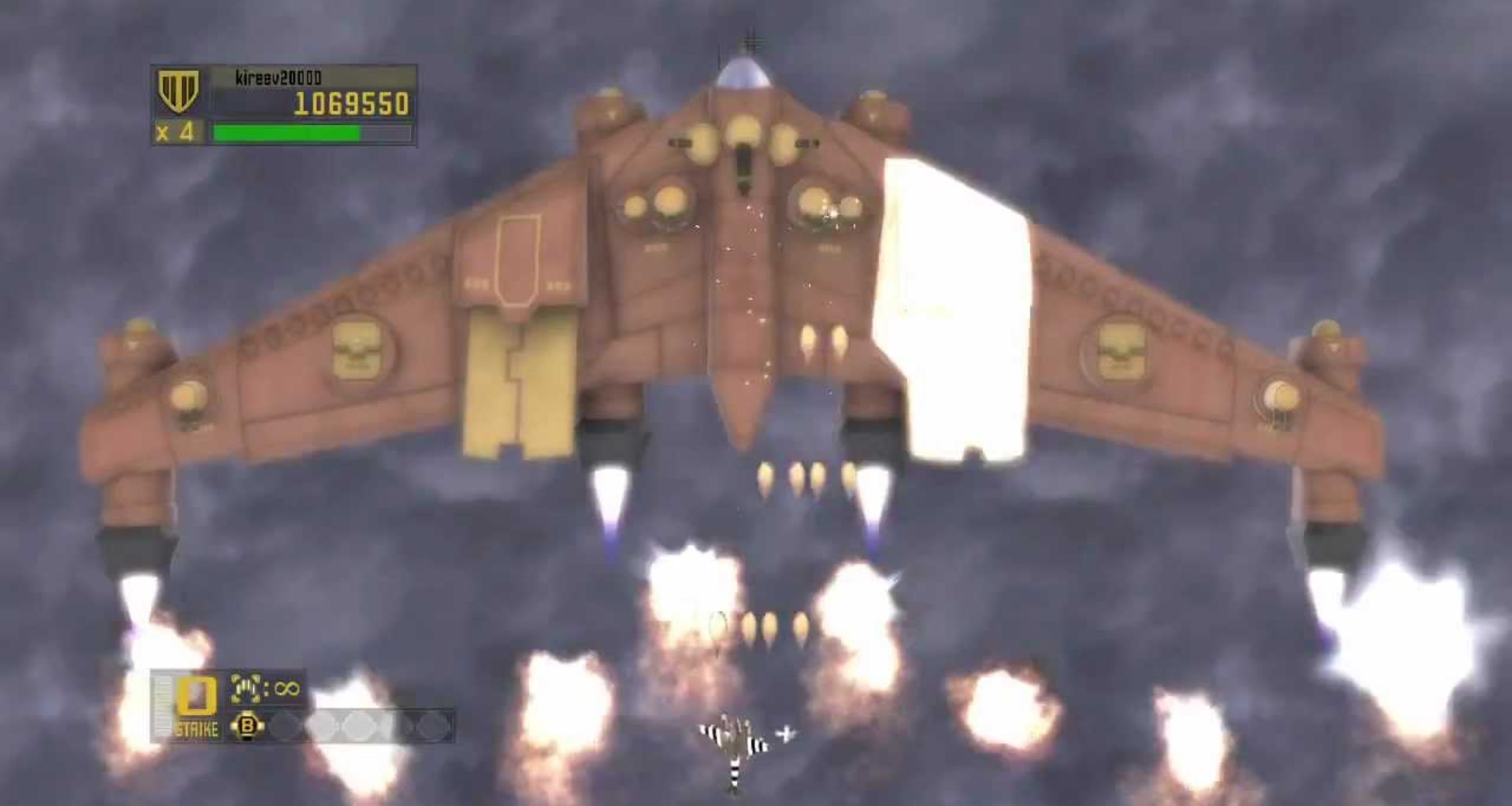 The original 1942 video game was a vertically scrolling shoot ’em up released by Capcom for the arcade parlours back in 1984. Since then it has undergone a goulash of remakes and appeared on the early living-room consoles like the Amstrad and the Commodore 64. Set over the Pacific during World War II, the game was renowned for the fact that despite being created by a Japanese company, the goal was to reach Tokyo and destroy the entire Japanese air fleet.

1942: Joint Strike is the latest reincarnation of the classic arcade game and has recently joined the Xbox Live Arcade line-up of downloadable remakes. Concept wise the game is almost identical, featuring a top-down view of your plane and swarms of enemies bringing bullet-hell to your screen. However, the game has been modernised slightly in the plot department – now it uses the trusty “alternative universe” tact for the setting; but the main difference lies in the presentation. Like many of the Xbox Live Arcade remakes, the graphics have been given a major overhaul and are now in glossy HD goodness.

Many fans of the retro days of the arcade machines will start to wonder how the wide-screen format of modern TVs could lend itself to the vertically scrolling shooter. Amazingly though, you hardly even notice the different orientation of the screen. The game’s levels and enemy patterns have been modified to make excellent use of the extra real estate to the left and right. In fact the horizontal setup even excels in Joint Strike’s two-player co-op gameplay (for two people either sitting side-by-side or connected via Xbox Live) as the wide action area allows a player to take a side each.

Players can choose from three different fighter planes (“The Lightning”,”The Mosquito” and “The Shinden”), each one having their own unique capabilities and attacks. For example the Mosquito plane has weaker armour but is extremely agile and responsive to pilot. The planes vary with regards to their health, speed, power and weapons so finding the best plane to suit your style of play is easy. Strike Force encourages you to play through the game with all three planes, but personally the Mosquito seemed to be the most effective. On top of the standard, upgradeable weapons in the game, there is also the devastating Strike Force attack from which the game gets its name. Essentially this attack teams two planes together to create a super-weapon that can annihilate masses of enemies at a time. The visual effects are stunning thanks to the detailed graphics, including one variation that creates a coiled lightning bolt between two players that fries anything that touches it.

Unlike the original classic there are no one-hit-deaths for the player anymore. Instead you have a health meter allowing you to take a certain amount of damage before losing a life. But the ability to do a loop-the-loop is still present. This special move allows the player to evade enemy fire by performing a quick flip with your plane. All this means that the formula of the game will seem familiar to fans of the original. Each level consists of waves and waves of enemies, finished by a big boss battle at the end. However, Joint Strike includes slight variations of the gameplay that involve elements of chase scenes and trying to collect objects whilst avoiding enemy fire. Overall there are five levels in the game, each with their own setting that will have you flying over rumbling volcanoes or a war-ravaged London. The back-drops of the game are amazing, but few will even notice them due to the shear amount of bullets, missiles and carnage happening in the fore-view.

Although the gameplay is limited and only takes around 30 minutes to clock (per plane), 1942: Joint Strike is still a satisfying gaming experience. The constant upgrades throughout the levels keep you interested and the game features an impressive selection of weapons and challenging enemies. Extreme fans of the game are likely to attempt all four levels of difficulty (this game is hard even at the medium setting) and across all three planes for Leaderboard prowess. Other more casual gamers should enjoy this as just a piece of nostalgia – a back to basics shooter with improved eye-candy.