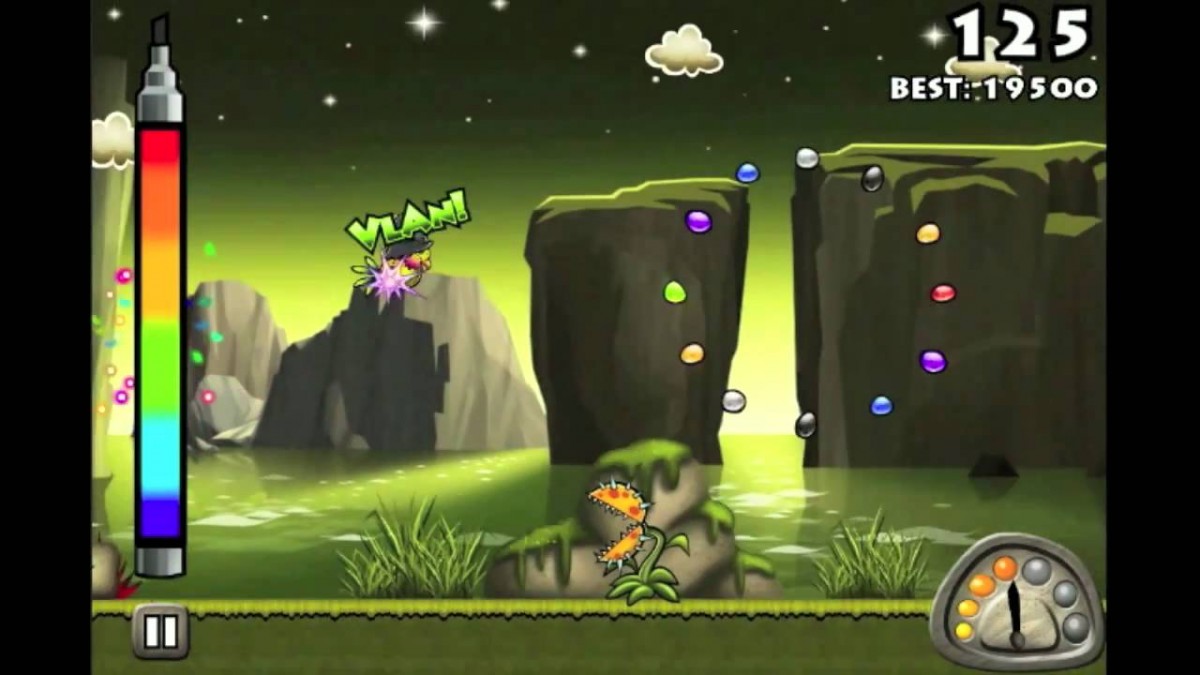 Were dinosaurs warm-blooded or coldblooded? Was the Troodon capable of evolving a human level of intelligence? Wasit a meteor or climate change that finally wiped out the former reptilian lordsof the Earth? We may never have definitive answers to these questions. However,Chop Chop Kicker offers indisputable proof that our caveman ancestors punteddinosaurs across miles of primitive landscape for sport. This is fact. Tellyour history teacher. You will get an A.

Chop Chop Kicker is a catapult-typegame. The caveman dude from Chop Chop Caveman uses his head (literally) tolaunch a tiny dinosaur into the air. The player must then help the dinosaurstay afloat by directing the critter towards certain wildlife that will givehim a boost (and steering him away from wildlife and stationary objects thatwill hinder his noble flight).

The object of Chop Chop Kicker is toset a record, break it, brag about it through OpenFeint, and buy coins forability upgrades. It’s not complicated, but you do have an interesting means ofcontrolling the dinosaur’s auto-scrolling adventure: your finger, which takeson the role of a rainbow-striped magic marker that can trace paths for thedinosaur to follow while it’s flying. The marker’s ink depletes rapidly whenyou use it, so drawing a safe path for miles and miles is not an option. Youcan, however, trace paths to guide the dino to jellybeans, eggs, and otheritems that restore the marker’s ink.

Chop Chop Kicker is as easy aspterodactyl pie, though beating your best scores obviously becomes a prettyintense challenge down the road. It’s a fun game to sink into for a few hoursthanks in part to its cute presentation. The graphics are clean and cartoony,and you can unlock several different backgrounds once you collect enough coins.The music is catchy, and it fades out randomly to help prevent overexposure.The sound effects are great, too: when you stop drawing a line, the marker“rattles” as if to insinuate that it’s being shaken up. This is just aridiculously satisfying sound to listen to.

Despite the game’s marker elementand the fun sound effects that come with it, Chop Chop Kicker might not haveenough content to satisfy you if you’re done with catapult-type games. This isunfortunate because the potential for depth is there. You can buy differentdinosaurs and different game backgrounds, but none of them seem to offer muchexcept something new to look at. Even the power-up upgrades aren’t very excitingnext to a more rounded catapult game like Fly Kiwi, Fly.

Chop Chop Kicker works well as adistraction, though, and is pleasing enough to burrow into for a little while.Oh, and it also works as a well-researched history lesson on primordial humanlife. Honest!