Not since Chop Chop Ninja has Gamerizon’s varied series actually been about chopping anything. Instead, the Chop Chop series has dabbled in sports like soccer and tennis, and spun-off new characters like Chop Chop Caveman. Chop Chop Slicer clearly benefits from the return to form, because it’s the strongest game in the series so far.

Taking ample inspiration from Fruit Ninja and Slice It!, Chop Chop Slicer successfully combines the two into something new. Like in Fruit Ninja, you have to slice flying objects and avoid a game-ending bomb, but in this case the flying fruit are replaced with aliens and the game-ending bomb is a pink space octopus.

We’ve seen Fruit Ninja clones before, and they often fail to impress us. But Chop Chop Slicer’s stroke of genius is incorporating the slice percentages from Slice It!, which completely changes the feeling of the game. Now instead of frantically slicing any which way, you’ll find yourself carefully lining up each attack for the maximum amount of points. 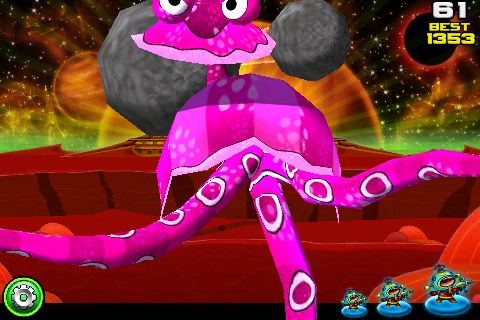 The creatures you face can be dispatched easily with a perfect 50/50 slice right down the middle, but as the action speeds up, you’ll have to settle for more, less-precise cuts. You’ll get big bonus points for accuracy, and at the end, you can upload your high score online.

Our main complaint with the game’s main mode is that it’s often hard to tell if you’ve successfully disposed of an object. Some objects, like asteroids, will continue flying at you even after you’ve sliced them. It’s frustrating to be hit by a chunk of asteroid that you could’ve sworn you’d already destroyed.

Other than that, though, this game is fantastic. The graphics are fun and colorful, and look very sharp on a Retina display. In addition to the main arcade mode, there are also two bonus modes– a timed version of the main game, and a perfect slice mode where you’ll only get points for 50/50 slices. Perfect slice mode is also fun because the waves are divided into rounds, which only advance if you miss a perfect slice.

Even though Chop Chop Slicer isn’t based on an original concept, you still won’t find anything quite like it on the App Store. This is one of our favorite high-score games in recent memory, so give it a try if you think Fruit Ninja and Slice It! would be even better if they were squeezed into the same app, and then shot into space.