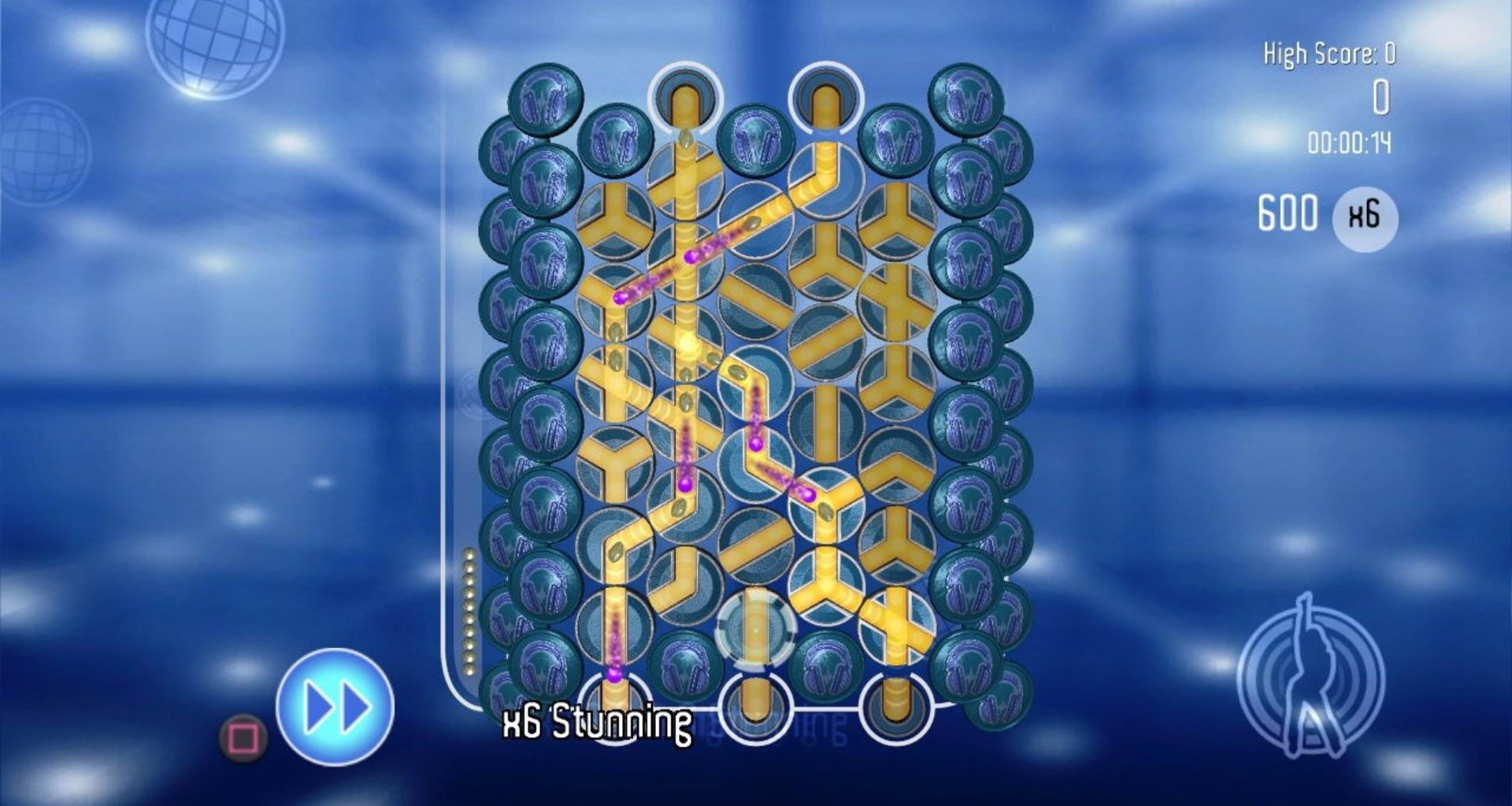 Okay, I’ll do it. I’ll be brutally honest from the start. I wasn’t really prepared to like Droplitz. A whole game similar to the least entertaining part of Bioshock, huh? But for the sake of Gameskeys, I’ll do it. I’ll trudge through a completely uninspiring dull puzzle game. Now don’t get me wrong, there are a few puzzle games that really grabbed me, such as Lumines. I just wasn’t expecting Droplitz, a game about plumbing of all things (sorry Mario), to grab me.

A few minutes into the game my fears were confirmed. The game seemed overly simplistic and lacking in any depth at all. I mean all you really do is rotate blocks and hope they line up right? Reluctantly I forced my way through a couple of games, failing miserably. But then something clicked. I started seeing how the game worked and chained some huge combo’s together. That was it – I was addicted.

Despite the gameplay seeming altogether too simple, once your mind starts working the right way and understanding the game you start to appreciate how sublime the Droplitz really is. The whole time you are playing the game, yellow blobs of an unknown origin (I’m not even going to guess) start flowing down your pipes. For some reason these blobs are limited in number, run out and it’s game over baby. Connecting a pathway from the top of the screen to the bottom starts a pink blob running down your now clear system. You have until this hits the bottom of the screen to add additional pathways to your route. Each new route triggers another pink blob, thus giving you a few more ever precious seconds to increase your combo. This is where the game gets hugely satisfying. Foresight (and luck) is required to piece together the biggest of all combos.

Enforcing the huge sense of satisfaction is the game’s audio. Although most of the time it’s rather discrete, the tempo ups when you are building a combo. When you successfully finish a chain, the game plays a sound effect indicating your points being added to your score, which is a great payoff as it’s extended if you earn a heap of points.

Once you score points, any pipe tiles you used to create your pathway are cleared and new pieces are put on the board. It’s a good idea to try and clear awkward pieces and keep useful ones on the board as long as possible. Also adding variety to the game are variations of the rules; these don’t change the game a huge amount, but I’m sure we will each have our favourite way to play. Also unlockable are different board types and themes. Differing amounts of tiles per board will be sure to test your best strategies.

While Droplitz is a game that absolutely anyone can pick up and play, it’s actually extremely devious. First time players, even puzzle veterans will be punished, running out of droplets faster than a PlayStation Portable runs out of charge. Keep with it though and you will notice that you will be playing for longer and longer as you get a handle on the game. If you are anything like me you will get addicted to beating your last score and unlocking new treats. Unfortunately I don’t have friends with this game yet, but scoreboards against your mates I reckon would become very competitive.

Droplitz doesn’t have any multiplayer modes, which is a slight shame. Luckily, then, the single player is fantastic. I know I will be coming back to this when I’m in a gaming slump. The seemingly simple game play zones you out, making this a great time killer or way to shut down for an evening. Just be warned: after extended games, you will see pipes everywhere – you may even have a.