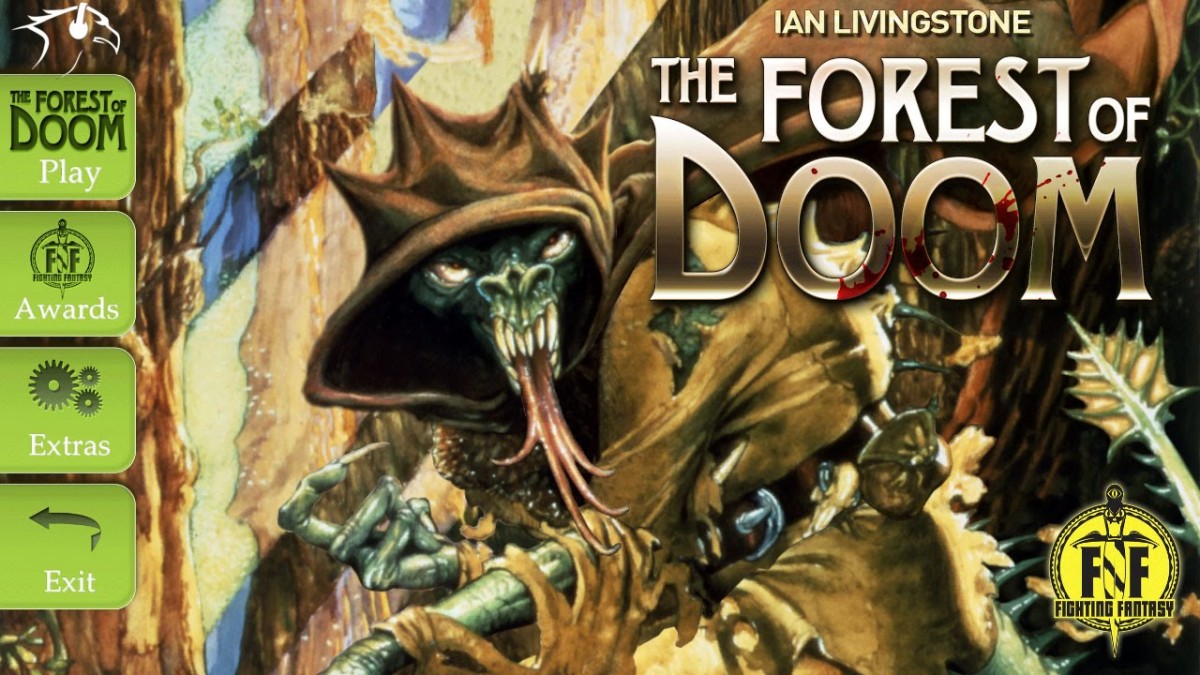 The Fighting Fantasy gamebook series has been a staple of many table-top gamers’ lives for decades. It started in the early ’80s as a collaboration between Steve Jackson and Ian Livingstone, and over the years it became a beloved choose-your-own-adventure series of books. Almost every page could take you in any number of directions, and many readers/players ended up being eaten alive by wolves, burnt to death by dragons, lost in caves, drowned, and so on.

The books were wonderfully illustrated. The stories were simple but involving, fiendishly deadly, and most of all fun. Tin Man Games, a publisher of numerous other iOS gamebooks, has just brought out its third Fighting Fantasy game, called The Forest of Doom. It is a lovingly crafted and updated version of one of the books from this classic series.

The story is pretty straightforward. You take the part of an adventurer who is unwittingly drawn into a quest for a legendary dwarven hammer that is necessary to the defense of the city and people of Stonewood. To get it, you have to fight your way through the treacherous and menacing Darkwood Forest using all of your skill and luck.

Every page in the story gives you a series of choices of where to go and what to do, and then those choices can lead to other critical decisions you have to make as you turn the page. Do you investigate the noises you hear coming from that deep, dark well? If you don’t, you can merrily continue on your journey. If you do, then you just may end up becoming the king of a race of underground dwelling creatures. Are you greedy enough to search that chest you found in a hut after you’ve already ransacked the fireplace? Yes or no– turn the page to discover your fate.

Your survivability in Forest of Doom is largely dependent on three different stats: Skill, Luck, and Stamina (health). In the beginning of the game you roll dice to determine your ratings in these stats. Your “skill” is basically your attack stat, and you will use this often, as Darkwood Forest is filled to the brim with things that want to kill you. Whether it’s bandits looking to take your gold, or a monster made out of stone that pops out of nowhere, you will constantly be sharpening your blade against the denizens of the forest. The combat is almost as simple as the story: you and your enemies roll dice, and whoever has the highest score gets a hit.

Luck is the second most important stat, and this is used to see how you react to surprising situations or the random terrors that you might happen upon. Are you trying to escape from the fire of a dragon’s breath or simply trying to avoid slipping from a ladder? Tap the screen and roll to see what happens! You don’t use the Luck skill that often, but when you do, failing the roll usually means you’re gonna have a bad time.

Your stats are also largely where the game has its problems. Once you roll your stats at the start of the game, you don’t get the option to re-roll. If your stats are too low (especially your “skill” stat), then you will have an absolutely miserable time trying to get through the adventure. What you happen to get is what you’re stuck with, and the only way to change this is to start the game over from scratch. You will happen upon items that can enhance your stats to make life a little easier, but these are few are far between, and you have an equally obnoxious chance of finding an item that can lower your stats as well.

We don’t usually give gaming tips in a review, but when playing The Forest of Doom if you have a Skill stat lower than 10 and Luck lower than eight, you should probably start over. You will get cut down by the lowliest of creatures over and over again and will trip over your own two feet.

It’s also very easy to get stuck in a loop of choices that take you nowhere. This can be frustrating when you know you’re not going where you want to go or doing what you want to do, but the game denies you the chance to do anything else. Luckily the game has a very cool bookmarking (save) system that allows you to go back to whatever page you’ve saved on to try and figure out something else. Sometimes a decision to go east instead of west can save you loads of irritation. The Forest of Doom also has a map that is invaluable in playing.

Gamebooks in general have a limited appeal. Their simplistic RPG mechanics and short stories are definitely not for everyone. But for those of us who grew up on these kinds of stories, and love the idea of “playing” a book, The Forest of Doom is a great adventure. They story, though short, is pretty great, the illustrations are gorgeous, and the imagination on display is remarkable. Tin Man Games has done a great job of bringing this classic story to iOS, and for us choose-your-own-adventure geeks it’s great to have on our phones or tablets.