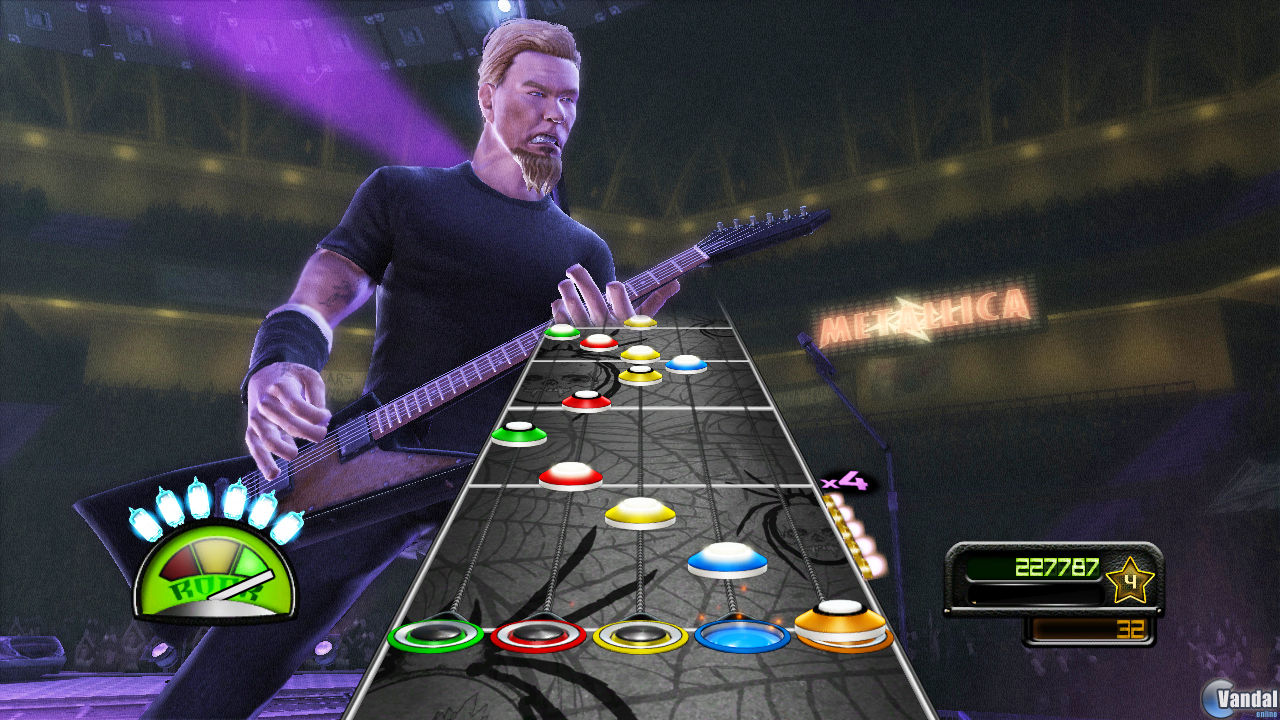 Before the cynic in you screams ‘cash-in’, cool your jets. This is a far cry from Activision’s previous ‘band-centric’ title, Guitar Hero: Aerosmith, which offered little beyond Guitar Hero with Steven Tyler sticky-taped on top. On the contrary, this is a fan’s dream, a loving tribute to Metallica, and above all, a blast to play. To dismiss it as a product of corporate greed is to do a disservice to all that is metal.

The game remains based upon the original World Tour engine, Neversoft opting to work with the familiar and apply a bit of polish. Career, Quickplay, Head to Head and Online are the menu staples, with a ‘backstage’ option for all the extra stuff. Your progression through Career Mode is determined by the tier system refined by Guitar Hero 1 and 2, as opposed to the gig-to-gig career favoured by World Tour.

There are a couple of little additions, the first being an ‘expert plus’ mode for drums that adds a second foot pedal (many retailers will chuck this in with a pre-order of the game). Be warned though, the co-ordination required for this mode is nigh-on superhuman, and should really only be tackled by drumming professionals or Lars Ulrich, yet it’s still a joy to watch a sweaty friend fail over and over as they try to master the mechanics.

Secondly, there’s a ‘drum over’ mode, which removes the drums from a song and lets you riff your own rhythm on top using deconstructed samples from said song. This should be particularly lauded for encouraging improvisation and cultivating at least a semblance of musical intuition, something that may silence the boring muso critics of Guitar Hero’s ‘play-along’ foundations.

Initially, the recognisable interface might dissuade those that already own World Tour, but to sink your teeth into this tracklist is possibly the most satisfying experience you can have with a plastic instrument. Considering Metallica is one of the most influential metal bands in the world, the tracklist almost feels archetypical, the complex guitar riffs, familiar lyrics and epic drum beats perfectly suited for a music game. Certainly, after shredding ‘Enter Sandman’, Coldplay’s ‘Shiver’ (found on World Tour) seems too tame, if not completely redundant.

The songs themselves are compiled from Metallica’s first albums through to their modern stuff, each one hand-picked by the band. Their earlier work is naturally the more memorable, but even the songs from their more recent albums such as Load/Reload and the downloadable Death Magnetic are terrific, chosen not for their commercial appeal but because they feel so damn good to play. As an added bonus there’s also a handful of songs picked by the band for being either influential to their sound or just plain awesome, as is the case with ‘Tuesday’s Gone’ by Lynyrd Skynyrd and ‘Stacked Actors’ by the Foo Fighters, respectively.

The difficulty of some of Metallica’s complex riffs is considerable: hand cramps, blisters and scratchy throats guaranteed even if playing on medium. Certainly during their early years, Metallica’s songs tended to be quite lengthy, nine-minute instrumentals (complete with grand political statements) par for the course. To soften the difficulty curve, you progress through the game by earning stars as opposed to completing whole sets, meaning you can still ‘finish’ the game even if you can’t nail the latter half of ‘One’.

To complete the package, Metallica spent some time doing motion capture at the Neversoft Studios, and their idiosyncrasies are nigh on perfect in their pixilated counterparts. Interestingly, you don’t play as the band for the majority of the game – Axel Steel and Judy Nails etc make a return here – but the sprites do a fine job at emulating Metallica’s performance style. It remains a pity that Neversoft are yet to nail human faces; the characters’ plastic expressions are situated uncomfortably within the Uncanny Valley. Just concentrate on the music rather than Johnny Napalm’s leering grimace and you’ll be fine.

If you’re a fan of Metallica and already own Guitar Hero: World Tour, this is a must buy. There’s a load of unlockable costumes, personalised guitars and trivia, performance footage and ‘behind-the-scenes’ videos of the band hilariously decked out in their motion-capture leotards. If you’re new to Metallica, this is a great introduction to classic metal, and a showcase title for Neversoft, who have really begun to ride the lightening. 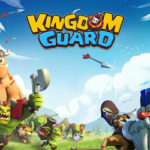 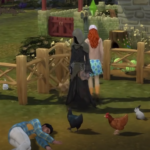