This guide will let you know how to evolve Scyther into Kleavor and get the Black Augurite in Pokemon Legends Arceus.

First, you need to have a scyther; you can find it in the Obsidian field lands. You need to go to the east side of heartwood and grand trees arena when you get there. You can also find this location from the map given below.

When you get there, you will find a small area covered with a tree; the scyther will spawn in small groups in the daytime. If you don’t see them, then you have to leave the area, go back to your camp and come back tomorrow in the morning. You will find the Scyther group, as shown in the image below.

If you ride him around and wait until his meter turns orange and your controller vibrates, he is on the trail of some resource. The best way to farm travelers is in Crimson Marlins.

The best way to find the black augurite is by completing the nose pass guide the way request, in which you have to give gully a Nosepass. You can find this Nosepass in coconut highlands in the north of Primeval grotto and the west side of the sacred plaza in some ruins, as shown on the map below.

You can quickly get this query from the professor’s bulletin board back at headquarters in Jupiter village before you unlock the nose pass to complete request no.46, which is setting up the coastlands camp. 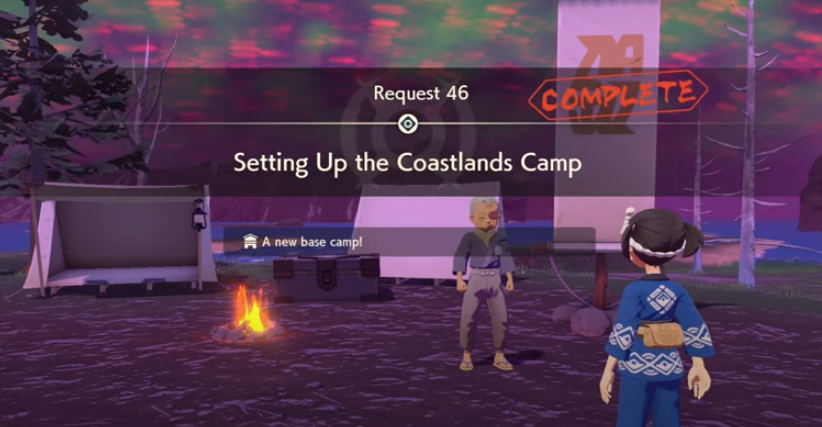 To find the requester, you will need to head over to the peninsula, which looks like a hand on the map in Cobalt Coastlands, as shown in the image below.

When you get there, she will send you to find York, who is located on the last little beach to the east, and he will be hanging out with the bird, as shown in the image below.

After completing the request, you need to get the Nosepass from coordinate highlands. When you have the nose pass, you can go to the bulletin board in Jupiter village to obtain the request ”Nosepass to guide the way.”

After completing this request, you need to head over to the Coronet highlands, where you get your nose pass and at the bottom southeast corner of the map at the highlands camp.

You will find a guy when you get there, and he will talk to you about the nose pass. Then he will send you over to the cave’s entrance which is located on the northwest side of the map, and when you get there, you need to give the nose pass so that you can find a way through the cave and as the reward, she will provide you with the Black Augury. When you have some Scyther and some black augurite, you will be ready to evolve into a clever by using the black augurite, as shown in the image below.