In this guide, you will come to know how to repair your ship and get off the first planet in No man’s Sky. You have to follow the step-by-step instructions in this guide to do so.

Once you’ve loaded into the game/planer, the first thing you will need to do is collect Ferrite dust to repair your scanner. You can get Ferrite dust from small, medium-sized rocks/stones found around the area you spawned in.

Keep in mind that if you spawn a planet where the conditions are too harsh, or you don’t like the planet, you can always make a new game until you get on the desired planet.

Once you’ve made the scanner, you have to gather sodium by using the scanner.

As you search the sodium area, it is recommended to keep an eye out for the blue crystals/Di-Hydrogen crystals because you will need about 40 of them to craft Di-Hydrogen jelly, and you will need it to repair your ship.

Once you’ve gathered the sodium and recharged your hazard protection, a beacon will then appear that will lead you to your crashed ship.

While you’re heading to your ship, it is recommended to mine red crystals and plants because they will give you carbon, and you can use the carbon to make carbon nanotubes which you can then use to make an analysis visor. You can also use it as fuel for the portable refiner and recharge your multitool.

Once you get in the ship for the first time, it will tell you that you need first to make a metal plating to repair part of the pulse engine you craft using ferrite dust.

Once you get into your ship for the second time, it will tell you that you need a hermetic seal to take to the sphere you spoke to earlier. It will give you a planetary chart that will direct you to a location where you will find a hermetic seal.

If you made the analysis visor earlier, you could use it to mark your ship to find it easier later on.

After you get the Di-Nitrogen jelly, you will need pure ferrite, which you get by putting normal ferrite into a portable refiner. And you will need oxygen to make the refiner, which you can find by using your canner and picking up oxygen plants around the area/planet. 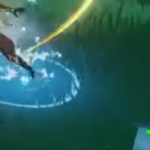 How to Play Crossplay in Genshin Impact PS4, PC & Mobile
Next Article