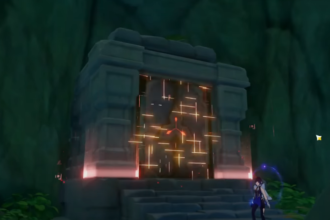 In this guide, I will share with you how to unlock the underwater waypoint and underground domain south of Vanarana, Sumeru.

Teleport to the statue of the seven on the loft side Yazadaha Pool.

Head west until you reach an area with a waterfall.

Defeat the two ruined sentinels at the top waterfall entrance and interact with the mechanism.

Follow the seelie downwards and through the water. Be careful not to drown.

Swim into a cave entrance and keep following the selfie all the way to its home.

Apply dendro element to the rock covered by vines in front of you to make it grow and reveal a dendrograna tree.

Get some dendrograna and perform a charged shot at the rock with the green emblem behind you to reveal an elemental monument.

Do the same to the rock right next to the dendrograna tree.

Apply some new dendrograna, head through the path the rock was blocking, and turn right.

Press T to pull yourself towards the star in the air and hand on top of the ruined walls.

Shoot a dendrogram-powered charged shot at the elemental monument down in front of you.

Turn right, glide down and defeat all enemies in front of the green barrier.

Walk into the corner left of the green barrier, climb onto the wall and squeeze through a small gap by holding your right.

Activate the elemental monument by applying dendro to it.

Activate the elemental monument behind you by applying dendro to it.

Shoot the rock with the green emblem next to the sealed mechanism with a dendrograna-powered charged shot to reveal an elemental monument.

Apply dendro to it and unseal the mechanism.

Activate the mechanism to lower the water level.

Jump down the defeat all the enemies to unlock the mechanism, which opens the round gate behind it.

Go through the gate and follow the path until you reach an open area with multiple pillars.

Glide down towards the sealed domain entrance.

Get some dendrograna fire-charged shots at the flying dendro objects in the air.

After hitting both of them, the domain will be unlocked.

Don’t forget to interact with it to unlock it as a teleport waypoint.

Teleport to the statue of the seven on the left side of Yazadaha Pool and head back to the waterfall area.

The water will now be drained and you can head west to unlock the waypoint that was underwater before.

How To Change Brightness In GTA 5 Online

Where in GTA 5 is the Fire Station 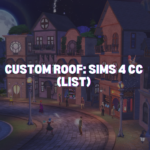 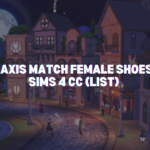