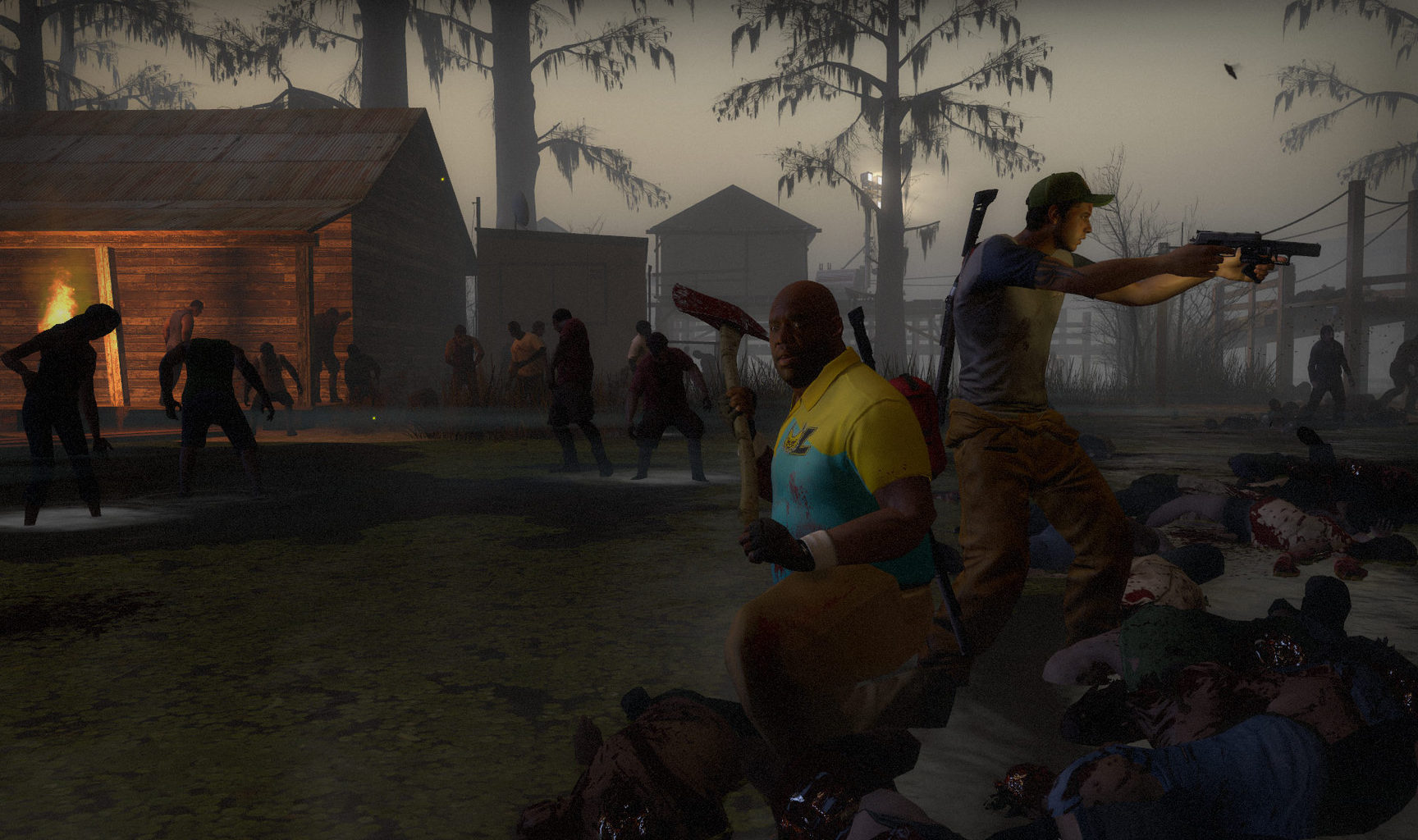 It seems that as every year goes by, the console market encroaches even further into the sacred realm of the Personal Computer. However, there is one area where the console infection will never reign as king, and that’s first person shooters. Especially if they involve killing lots, and lots of Zombies.

Unsurprisingly, both versions have the same story. You play as one of four survivors of a massive (and it really is massive) zombie infestation. Gormless cadavers shuffle their way around the various campaign maps on offer and you get to bash them down, blow them away or explode them into oblivion. You’ll play as either the immaculately dressed Nick (his model design seemed to remind me of Mr. Blonde from Reservoir Dogs, which was well creepy), Ellis the hillbilly (who has a useful knowledge of Dukes of Hazard-esque cars), the feisty Rochelle, who is never afraid of speaking her mind, or as the burly giant, Coach, who can wield a fire axe with pure power and grace. Together you set off to make your way through infested malls, carnival theme parks, rock stadiums and all manner of dark and creepy places as you unendingly try to find a way out of the infected and back into the safety of civilization.

The premise behind the first Left for Dead remains largely unchanged. There are zombies, they want to kill you. You want them dead. Commence firing. And running. And firing some more.

However Left for Dead 2 has given everything a facelift and a retrofit. Now there are more standard weapon choices to amuse yourself with. From AK-47s to M16s. From Desert Eagle Magnums to combat shotguns. They can be kitted out with laser sights or even incendiary ammunition to make the carnage easier to see, and err… finger licking good. Grenades and Molotovs are back – but there is the new addition of specialist armaments such as the boomer bile grenade that attract the infected from all around, and can be used in increasingly creative and ingenious ways. But by far the most exciting and childishly fun addition is melee weapons – axes, swords, frying pans and even rock guitars can be used to slice, dice, bash or smash your way through hordes of Zombies – and in many situations are often preferable to bullets and bombs.

As well as new weapons and tools there is also the return of some of your most loved (or hated) special infected. The Smoker is back with his infuriatingly long tongue, the Witch still seems to be perpetually depressed about something (with you being the only person worth taking it out on) and the Tank is still really tough, and really angry. In addition there is the inclusion of several new characters such as the Jockey – who leaps up for a piggy back and won’t get off until you’re dead or he is. The Charger, who well… charges you to death. And the spitter, the most bulimic of the infected, who can never seem to keep things down, preferring instead to spit toxic bile all over the place. Also watch out for the Boomer. Note to self: it is not a good idea to take him down with a melee weapon.

You have to battle all of these nasties in the face of regular infected who in their plagued boredom have decided to kit themselves out in all manner of annoying things lying about in the post-apocalyptic wasteland. From riot gear to hazmat suits, they’ll all require an extra bullet or two to take them down.

When it comes to the actual gameplay there are several key differences between the console version and the PC version of Left for Dead 2. The first and most important is one that is found amongst all first person shooter games – and the reason why the PC is still the platform of choice for competitive multiplayer FPS gaming. The degree of control that a key board and mouse provides means that your immersion in the action is more complete. Don’t get me wrong, as our earlier review already indicated, the console game play is gory, scary, dramatic and fun. But on the PC it’s just that little bit more awesome. There’s nothing quite like having the ability to quickly and methodically control which zombie limb your melee fire axe is going to cleave off next.

This is where the PC version of Left for Dead 2 really comes into its own. By providing the ability to aim faster, shoot with more accuracy, and run in directions you really want to go in (while fleeing from hordes of screaming Zombies because your team mate just ganked the whole city) the game can be enjoyed at a breakneck speed that casual console gamers might not experience.

Valve’s decision to render the game with a slightly cartoonish 1970’s splatter movie ethic (think Robert Rodriguez’s Planet Terror) has really paid off. Sure, it’s Southern transition is a departure from the more claustrophobic halls and passageways of the original. The whole Dusk to Dawn meets the texas chainsaw massacre was quirky, new and interesting. Admittedly it does take some getting used to, but it’s a refreshing change of focus. Speaking of focus, when viewed at the higher resolutions that the PC can provide, the shadowy corners of infested shopping malls and cornfields take on a much more visceral and immersive quality; a pleasing consequence of how well the game has been graphically designed. Sure, legitimate quibbles can be made about the more cartoony aspects of the game’s graphics and how that cartoon feel is translated into gameplay. For example, when healing, characters simply run their hands over their bodies, magically relieving themselves of all wounds and scrapes. But at the end of the day the Southern horror film aesthetic coupled with intense action does manage to please you enough of the time to make these slightly unreal moments of gameplay seem pretty forgivable. Left for Dead 2 manages to comfortably strike a balance between aesthetic, design, playability and atmosphere.

However, if there is one area in which Left for Dead 2 doesn’t quite hit the target, it’s in the sound direction department. Now, at first listen the sound is pretty good. In fact its fair enough to say that its probably mostly excellent. It’s nice to hear the Zombie horde coming before you need to bring your guns to bear. And the tears of the Witch are pretty damn frightening. The problem comes from the lack of variable sound samples on offer. This game has a lot of replay value – particularly due to its team work based multiplayer nature. As a consequence you are going to hear the same sounds a lot, and often. Some of these – such as the survivors’ automated friendly fire warnings become pretty tiresome, as they are repeated over, and over, and over again. Okay fine, maybe this reviewer just needs to work on his aim – but it would be nice to have a little variance, or different clips that increased in emotive anger if my spamming didn’t stay under control. It’s a minor objection – but when your game is sold on its replayability, it’s one that could have perhaps been factored in more intelligently by the developers. Note to Valve: perhaps something to think about for a patch, hint hint.

Killing Zombies is fun. It’s even more fun when you can do it multiplayer style with your friends. Those playing Left for Dead 2 on the PC have the added benefit of the Steam system to facilitate some good old co-operative or competitive zombie action. You can choose to play through the campaign, to go head to head in the versus mode, take on the infected in the scavenge mode (which is really just a tarted up capture the flag) or you can decide to go the whole hog, round up the troops, and take on the infected with the realism turned up to 11. So, there are obviously lots of ways to engage with your fellow living human beings online. And that, unfortunately is the double edged sword that PC first person shooters – or first person shooters in general always have to face. Playing with other people.

The learning curve for LFD2 is not that steep – but it’s made ever steeper by irate team mates on a public server who are perpetuately infuriated by your inability to back them up. It’s recommended you get some practice in before venturing out into the online world. Left for Dead 2 players play for keeps. That being said, shacking up to a friends only server with three other gaming buddies and playing my way through the co-op campaign has to be one of the more satisfying online experiences I’ve had. So as long as you get on well with your teammates, Left for Dead 2’s multiplayer options do not disappoint. And as long as you are playing it on the PC you are also thankfully afforded a much greater degree of competitive flexibility to become the best survivor (or infected) you can be.

We knew Left for Dead 2 on the console was a good buy, and a great game. The PC version mirrors all of the good stuff and can be confidently defined as a title that is going to be hours of fun to PC gamers the world over. With more downloadable content and achievements that Steam is sure to bring its way, it’s a game that is definitely worth installing and taking for a spin.