This guide will show you the eight most annoying creatures in Subnautica.

You can find the biter/bleeder/blighters in the crash zone, grassy plateaus, jelly shroom caves, mountains, blood kelp biome, parts of the lost river kelp forest, and part of the sparse reef.

All three of these parasites more or less do the same thing: when you go near them, or they get aggro by you, they will charge at you and then attach themselves to you, dealing damage as long as they are attached. It’s not that big of a threat, but having to pull out your knife every so often to cut them off of you, especially when there’s a lot of them nearby, can get annoying.

You can find the Mesmer in the bulb zone, crag field, caves of the kelp forest, parts of the lost river, and in parts of the northeastern mushroom forest.

The mesmers are annoying because they can deal a decent amount of damage to you given their small size, but it does damage by hypnotizing your character and forcing you toward it. When trying to explore caves in peace can prove to be quite annoying to deal with, though it is relatively easy to kill as long as you can get past its hypnotization.

You can find the sand shark in the crash zone, the dunes, and the grassy plateau’s biome.

The sand shark does a mediocre amount of damage to you, but it will be annoying when you explore the wrecks around the grassy plateau’s. It’s not much of a threat, though.

The cave/blood crawlers are usually found in the blood kelp, lost river, aurora, the floating islands dunes, and underwater islands.

There is no problem with dealing with blood crawlers. But at times, when you go either to the floating island or on the mountain island, the cave crawlers can be quite annoying since many of them roam the islands. Fortunately, they are pretty easy to kill, as it only takes a few hits with the knife to kill them.

You can find the stalker only in parts of the crash zone and throughout the kelp forest biome.

The stalker is pretty annoying in the early game since it is pretty fast, and it takes a little bit longer than most creatures for it to stop chasing you. Another thing that makes this annoying is getting stalker teeth to drop from it since sometimes stalker teeth can crop pretty easily from it. But sometimes, they can take forever to drop teeth since RNG can befriend or your worst enemy at times.

You can only find the crash fish in the kelp forest and safe shallow caves.

The crash fish is probably one of the most annoying creatures to deal with in the early game, primarly. Dealing with them can be pretty annoying when going into the caves since they are fast, so they can catch up to you quickly and the closer they are to you.

Lava larva can be a bit of a pain later in the game when you are heading into the inactive and active lava zones, not because they damage you. When you bring a vehicle nearby, it will latch onto the vehicle and drain its energy as long as it is attached. You have to get out of your vehicle in the lava zones to cut them off your vehicle can get pretty tiring, not to mention that if you aren’t in a vehicle in those area’s you take fire damage.

Also, there is a pretty good amount of them scattered throughout the biome in the lava zones.

Finally, you can find the bone shark in the bulb zone, crag field, parts of the crash zone, the mushroom forest, and the underwater islands.

The Bone shark is the most annoying creature in Subautica because it can do a decent amount of damage alone, but usually, it isn’t alone. When there’s one bone shark, there’s usually 2-3 others swimming around nearby, and when there’s multiple of them attacking at a time, they can easily destroy your sea moth or prawn suit if you aren’t careful,

So they can be annoying from the early game up to the late game.

How to install Curvy Dancers Mod in GTA 5

How to install the Metro System mod in Cyberpunk 2077

How to install the Vehicle Combat Mod in Cyberpunk 2077

How to install the Perks Overhaul mod in Cyberpunk 2077 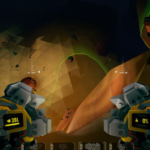 How to Get the Data Cell in Deep Rock Galactic