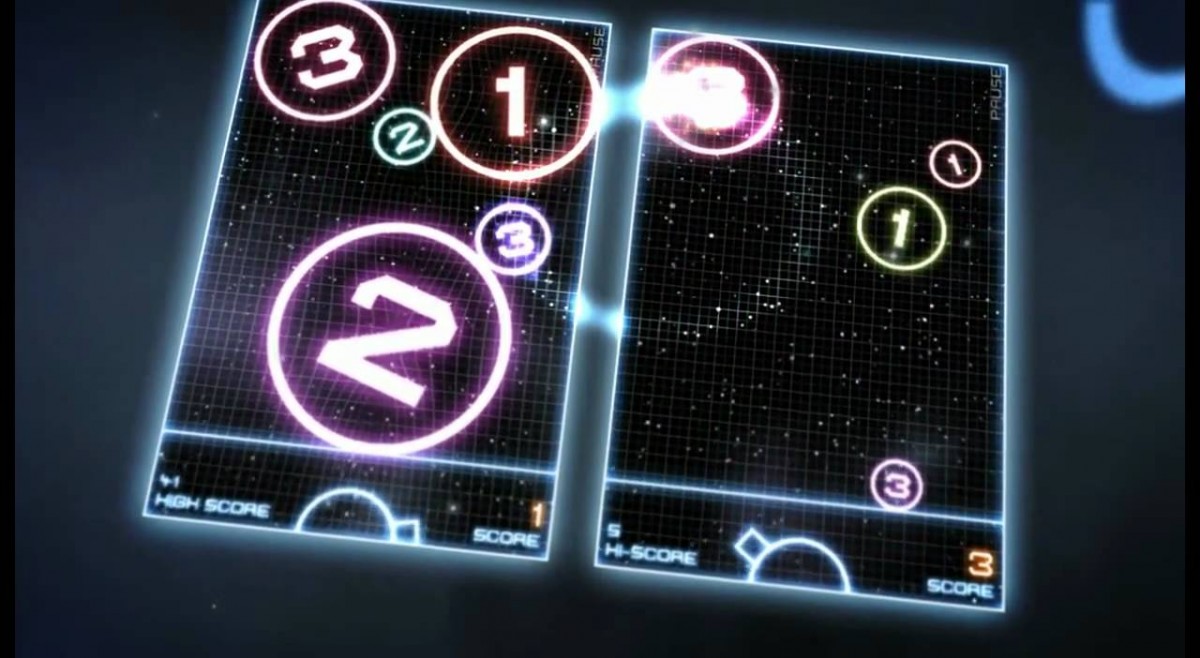 Orbital is a rare gem on the iPhone. It likens itself as the spiritual successor of the free Flash game, Gimme Friction Baby, but adds better physics and a polished shine that the original simply didn’t offer. It has long intrigued us, and even though it took a few rounds for us to figure out exactly what was going on, by the time we got the hang of it, we were hooked.

Each game plays out roughly the same; there are no levels and there is no progression, so to speak. A starry field looms before you, overlaid with a grid, and an idle cannon slowly lurches back and forth like a pendulum at the bottom of the screen, just below a horizontal line. Each blast of the cannon creates a heavenly body with the number three tucked away inside. The goal is to then eliminate each circular body by hitting it three more times. The difficulty lies in the fact that in doing so, you must create a new body which in turn must be destroyed.

Timing is everything, as you have no control over the cannon’s sway, only in firing it. Your projectiles bounce across the screen with realistic physical force, but you must not let them ricochet back across the lower horizontal line. Doing so means game over.

Further challenge is added because the closer the projectile stops near a wall or existing body, the smaller the body it creates, making it much harder to target. Sooner rather than later, the grid is filled with these destructible objects and it’s even easier to accidentally send your cannonball back across the death line.

Three modes of play add some variety to the mix, although the basic formula changes only slightly with each one. Pure mode plays out using normal physics, and is the most difficult. Gravity mode adds gravitational pull to the bodies you’ve already created, so when a projectile comes careening toward it, it will pull it in along a gravitational curve. This extra force frequently saves you from virtual death. Lastly, a multiplayer mode (offline only) plays out much like a game of hot potato: passing the device back and forth, the one who sends an object over the line loses.

The premise may be simple, giving off a classic arcade vibe, but the presentation is top notch. The stars are always humming by in the background, complemented by gaseous clouds to add some atmosphere (literally). Each projectile leaves behind it a stream of brightly colored particle effects, which show up again when you successfully explode one of the bodies. Neon colors abound, as well, giving the whole package a retro ambiance pleasing to the eye.

The soundtrack is likewise superb. The music sounds like an eclectic mix between the Mass Effect and Mirror’s Edge soundtracks, with soothing yet haunting tunes that have just enough energy to add intensity to every play session.

Orbital really only offers a solitary goal: get the highest score possible (trackable via online leaderboards). There are no experience points, no story, no power-ups, or anything else to clutter the experience. What you see is what you get: an interesting arcade-style game for the iPhone that looks and sounds great and will keep you coming back for more. Seeing as how it’s currently on sale, what are you waiting for?