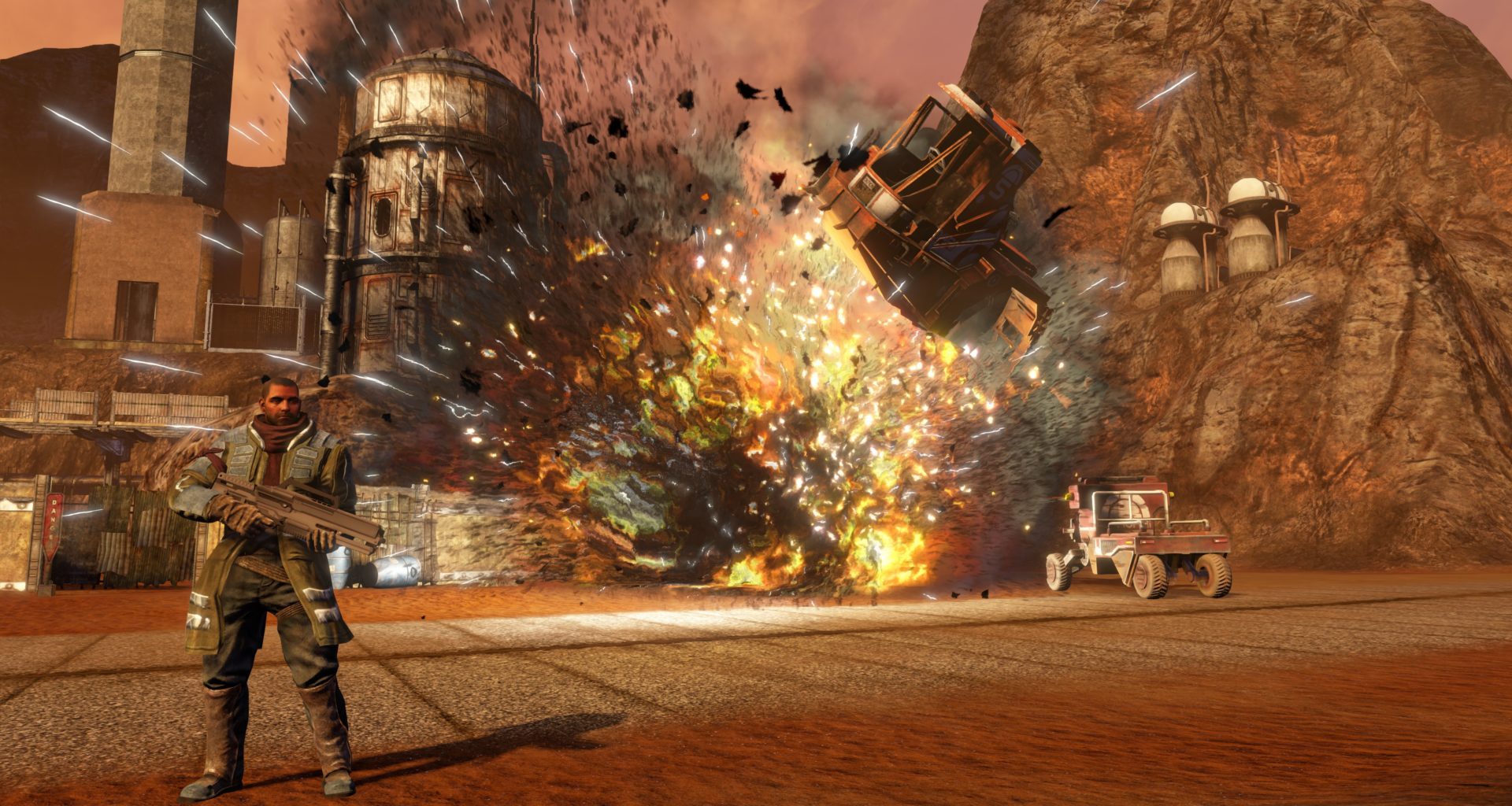 We were introduced to the Red Faction series back in 2001 when it show-cased “Geo-Mod” technology – short for “geometry modification”. It gave us never-seen-before destructible environments and allowed players to demolish their surroundings and transform the terrain to their advantage. For example, instead of opening a door like a normal pleb you could blast through the rock next to the door with a rocket launcher to make another entry point. This Geo-Mod engine was actually intended to be used for Descent 4, a prequel to the memorable underground first person shooter of the same name. However after the Descent franchise fell over, Volition took the back-end (and even some plot elements) and incorporated them into Red Faction.

Now, eight years later we have a next-gen follow-up to the franchise called Red Faction: Guerrilla. Still set on the red planet of Mars in 2128, the Earth Defense Force (EDF) – originally portrayed as the good guys in the first game, have now turned to crime and extortion, kidnapping people and putting them in forced labour camps for profit. Players assume the command of character Alec Mason, a former miner who rebels against the corrupt EDF in an effort to restore the balance of power. Using guerrilla tactics and weapons of mass destruction, you will be sabotaging supply lines, raiding compounds, rescuing miners for the revolution and basically just blowing up anything with an EDF logo on it. All in the name of freedom and justice of course.

This is where the updated Geo-Mod 2.0 engine is put to work and is teamed up with the Havoc physics engine to create some spectacular and realistic scenes of carnage. Guerrilla basically puts no limit to your destructive tendencies giving you a huge open-world to explore and mess up to your heart’s content. Apart from just sitting back and laying waste to everything you see, there is a large tactical element to your destruction too. You can set ambushes by weakening bridges, prevent enemy reinforcements by blowing up staircases or plan out a chain reaction of explosions to cause havoc in an EDF strong-hold. The attention to detail is stunning in Guerrilla, from every vehicle (they include armoured SUVs, dune buggies and mech robots) through to the Martian-inspired buildings and structures that litter the dusty red planet’s surface. In some cases it’s almost a shame to cause these beautifully designed pieces of architecture to come crashing down around you. Any changes you make to the environment are permanent – whether for good or worse meaning that your trigger-heavy actions can also work against you, sometimes pinning yourself behind rubble and preventing a quick escape. This dynamic feel to the game makes it improvisational, instinctive and fun to play over and over.

With the open-ended, free-roaming style of the game, you will be spending most of your time completing missions that drive the story. But on top of this, there are also activities scattered around the place that can be triggered by events as you play to keep things interesting. These activities are optional but getting through the story missions without them will prove extremely difficult. Each successfully completed activity earns you “salvage” points that allow you to upgrade weapons or gain allies from the local populace who can aid you. Luckily these activities are extremely fun, meaning you won’t want to turn them down most of the time. Some of them include just running around smashing stuff – which is what you’ll want to do 90% of the time anyway. Others include a raid type side-mission where you must help a group of rebel soldiers storm an EDF-controlled property; or a rescue activity where you must save detained colonists and deliver them to a safehouse. Plus plenty of others, each of them satisfying in their own way and offer a change of pace from the standard storyline.

The difficulty in the game is worth a mention here, as even veteran gamers may experience the occasional frustrating death later on in the game. Although the AI isn’t the best we’ve seen, the shear number of enemies you can encounter at once (and from all directions) can make for some “against-all-odds” battles. This is hardly a complaint though, as the great thing about the non-linear design of Guerrilla means that if you die, you can think of numerous different ways to tackle the situation next time.

In a dramatic shift from the original Red Faction game, Guerrilla is now a third-person shooter rather than a first-person one. Considering the amount of action taking place on screen, it is fairly obvious why the developers chose to have a free-moving camera in order for you to pan around and see what is happening around Alec Mason at all times. The third-person approach also seems to speed up the gameplay and gives a better feel to the fast-paced guerrilla-style combat.

The single-player campaign is a lengthy one, but for those who want more explosive chaos, they can head online for multiplayer madness. Guerrilla has 16 player online support and an impressive array of customisations to make every match completely different. Objectives like Siege mode (teams take turns attacking and defending two high rise structures), Capture the Flag and Demolition (cause as much damage as you possibly can) are manically frantic and a hell of a lot of fun.

As far as the negative aspects of the game go, there are just a couple to mention. Sometimes the game does tend to rely too heavily on its awesome Geo-Mod engine meaning that the gameplay can get slightly repetitive. Seeing things blow-up is great the first few thousand times, but after a while it loses a bit of its gloss. Also not being able to save at any location can also get tedious at times with the amount of traveling you do in the sprawling world. These are very minor complaints however as there is no doubt that Guerrilla is an excellent game and a promising revival to the Red Faction franchise. The single-player missions (with a few activities added) clocks in at over 20 hours of captivating gameplay. Add to this the multiplayer aspects and replay value with the dynamic style of play and you have a very worthy title for your hard-earned moola.