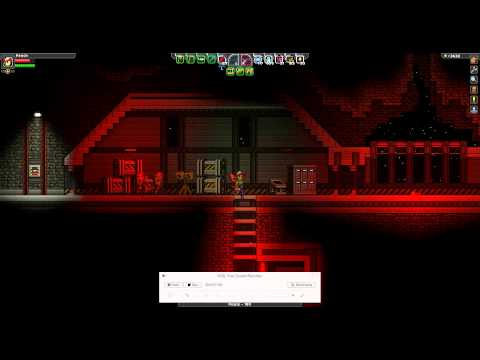 Erchius Mining Facility is a mission, and in order to complete this mission, you need to get back to your ship and talk to your sail, because you need to travel to some unknown planet.

The facility itself is straightforward and there aren’t whole lots of places to get lost. As a matter of fact, a lot of places tie back to the beginning so if you die, you will appear nearby. There are all kinds of usable things here mostly resources, quite a few pixels, and the occasional oddity, but most importantly, there is a vanity set here; it’s a full space astronaut’s set. It’s pretty looking and it spawns only at specific locations. If you are successful in completing this mission, you will also get the opportunity to get four chests. But before that, let me talk a little bit about the monsters that are in the game – these weird pink blue creatures.

It’s extremely difficult for me to define these monsters: these are like humanoids, but they are pink and weird looking. The interesting thing is that they are very straightforward; they run at you from time to time, they will stick their arm out and then spew some bodily fluid on you. To fight these monsters, I personally decided to use the scouter set and you can use it too. For extra security, I also came with an iron broadsword. The best you can do to kill these monsters is avoid them at first and then attack them from behind; knock them out as soon as they stick their arm out. To avoid getting injured, jump over them and they will usually miss.

Finding these guys is mostly about moving around because most of the times you can’t kill them by picking one or two of them; if you combo-kill them, it’s all the better. It will also happen that you will get attacked by three or four of them simultaneously. In these situations, instead of killing them one by one, you need to attack all these monsters simultaneously by using the combo.

A Room and Large Cluster of Crystals

If you turn on this lantern, you will see the chest down under the ground. Just walk a little bit to the left, drop down and you have got a chest. I’m not 100% sure if the parts are randomized: it is likely that you will find different parts at different places; you will find the head of the chest this time, and possibly the legs next time.

Next thing you will come across is a building that you will have to approach from the left, after going up the ramp and jumping up a ladder. In this particular building, you might find few humans fighting the monsters, and watching them fight is very interesting. If you kill all these monsters and try to loot the place, you will notice that there is a droppable place, a droppable spot in the middle of the building; drop all the way to bottom and you will find another part of the chest.

The next place you will approach is closer to the building, but not inside the building. In this building, you will have to approach from the right, and again, inside, there will be fight ensuing between humans and monsters. All you have to do is kill all the monsters, loot the place, go out of the building using the left path up the roof of this place. You will notice here that there is an opening in the ceiling.

This ceiling is like an air duct. Jump in there, follow it to the right, drop down, and there you will find another chest. The last chest is present to the right of the building where you fought the first monster who had big all two-handed hammer, and who forced you to the left. Then there was the bunk room up above, and just after that building to the right, if you go up, stay high and try not to fall down. Here you will find the last chest. Now you have got all the four chests that you were looking for.

Other Tighter Areas in the Mission

You will also notice throughout this mission that there are few tighter and smaller areas which definitely look as if they go somewhere, and the reality is, yes, they go somewhere. These places are distortion orbs; you can easily fall into the distortion orb tech. Once you fall down, move to the right, and you are going to find the most horrific thing of this mission.

This is a very straightforward fight. Basically, there are three phases and in each phase the action you are supposed to take on your part is same, but the monster will do differently. The monster will have the same action but in different patterns. So the goal here is to activate the four switches, one in each corner – top left, top right, bottom left and bottom right. Once you have activated all the four switches, there is a gun down in the center that will be activated. The gun will shoot the spider, and it will lose its health. All you have to do is repeat this three times. Initially, the horror has four beams, but as you keep on shooting it, its beams will be left to one. Make sure that you have bandages with you because, in most part of this fighting, you will also be hit by the monster. Once the mission is over, go to the teleport and get back.