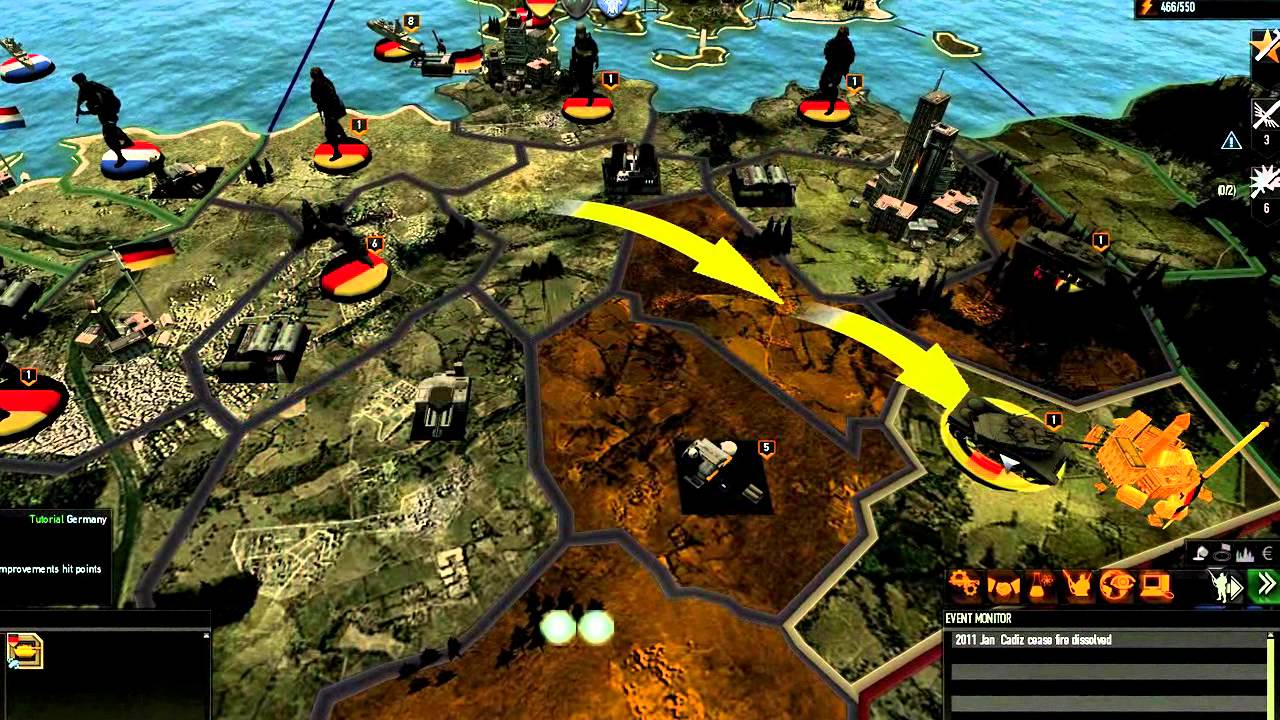 The advertising for this game intrigued us. Words like “unbelievable depth” and “innovative mix of strategic and tactical game play” all promised a great new war game that was going to be just the thing for the long winter months ahead. Sadly, advertising hype aside, this game from Swedish Developer Colossai Studios and available from Steam, never reaches higher than average.

The game is set in the near future, with the basic premise that the world resources are at an all time low and world economies are on the brink of financial meltdown (sounds like next weeks news). You control one of the nations of Europe or North Africa, in a world where war is now the only chance for survival.

What strikes you first about this game is the world map. Divided into 45 regions and made of 500 areas with 100 cities, it is garish mish-mash of colours that are awfully hard to view for any length of time. The detail on some of the buildings and cities is good, however the strategic map terrain harkens back to the graphics of 10 years ago. This curious mix of old and new makes it difficult to discern who owns each country and does little to draw you into the game.

The basic gameplay doesn’t innovate, with the mix of tactical and strategic gameplay having been around since the first transition of war-based board war games onto the PC. As a player you control a bunch of units that you can stack in regions and use to attack border regions, very much in the style of Risk. The only difference being deeper penetration attacks from aircraft, paratroops and artillery. In each region you can build one building that is used to either produce units, power other buildings or act as a supply centre. You have the ability to research technology upgrades such as unit upgrades, biological weapons, nukes etc. An engineer unit does the building and, as you create more units and buildings, the upkeep also increases.

Each game turn is broken down into movement and combat phase and, thankfully, despite the amount of countries, the computer controlled turns are quite quick.

Once you enter into combat, you go into tactical combat mode, where you can fight out the battle on a hex grid. This grid is placed over a photo-realistic terrain, with both weather and terrain affecting the performance of your units. Thanks to its modern-day setting, you also have aircraft, paratroops, and naval units to add to the mix. The combat plays out like a chess match, with very little opportunity to exercise any finesse other than the use of the fog of war to surprise an opponent. Accordingly, you will soon revert to having the computer resolve the combat phase for you. There are some strategic decisions that you can make to affect the outcome of the war, including using paratroops to cut off supply lines, or spies to wreak havoc in an opponents economy.

There is the usual plethora of pull-down menus to control your country, including both research and economy statistics. The presentation of these are poorly delivered and quite crude. This makes them hard to read and not particularly intuitive. The game economy and your influence over it is limited, with the amount of territories controlled largely dictating your income. Population morale also has some influence, but your ability to manage this is also sadly limited.

What the developers have tried to do is to make the game fast-paced. Traditionally, in these types of games, the pace is reasonably measured with countries largely focusing on their own borders, building economies, and reluctant to declare war on one another. In this game, however, all hell breaks lose right from the start, with countries immediately declaring war on each other in a desperate race to gain regions and resources. This certainly makes for a fast-paced game, however it feels contrived and very unrealistic. In one game, just about every European country was at war with at least one other by turn 5. It’s an interesting concept, but for players of these types of games, a slower, more circumspect pace is generally preferable.

One really annoying aspect of the game is the voiceover for commands when you click on your infantry units. A heavily accented voice describes them as In-Phaant-Tree. This has you smiling at first, but soon you reflect on how it smacks of a game developed on a small budget with the voiceover volunteer having English as a second language.

This was a game we really wanted to like – particularly given the dearth of new war games on the market at the moment. It promised a lot, however the more we played it the more disappointed we became. It is certainly not worth the $39.99 and barely worth the bandwidth to download it from Steam.