Things You Didn’t Know About Axolotls in Minecraft

This guide will provide you with 18 things you didn’t know about Axolotls in Minecraft.

Axolotl does something super cute while fighting. Every time they get hit, there is a one in three chance they’ll play dead. They’ll drop to their side in the water and heal two hearts with regeneration, one for 10 seconds.

Mojang has given them ‘amphibious’ qualities like real life.

They take extra damage from the impaling tridents, but they make pufferfish inflate, unlike other aquatic mobs, a perfect mixture of aquatic and land lubbing mobs.

Axolotls spawn in underground cave pools or any water below y=63 with blocks above it.

Axolotls love to play in the bubble columns. 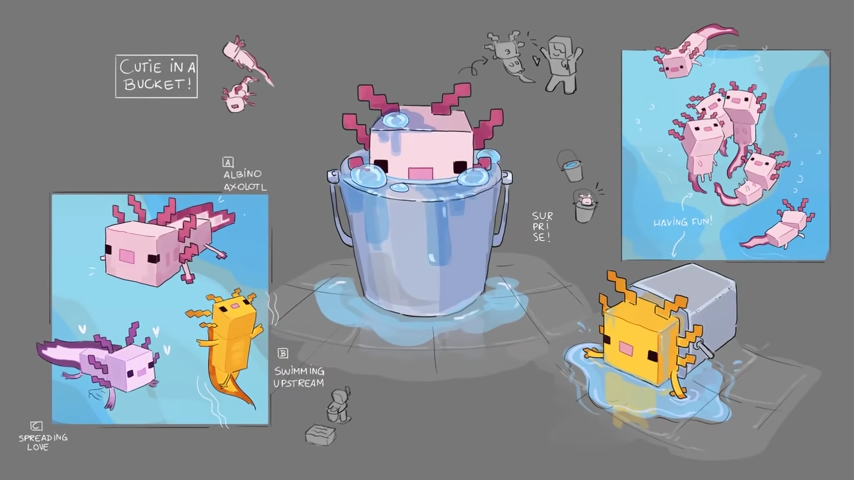 Here’s some concept art for the Axolotls. These are the original sketches, and you can see how they kept their charm.

In the snapshots for 1.17, there was a hidden texture for them; it looked sort of like a wide-open mouth and would have looked like this in-game if you used it.

Axolotls are passive towards the player and won’t attack you; they can even be attached to leads and moved.

You can pick them up in buckets.; it will even net you a fitting advancement!

If you rename the bucket in an anvil, the Axolotl will name it when you spawn it.

Axolotls are small salamanders living in Mexico;  So Mojang added them to raise awareness, just like they did with pandas, turtles, and bees.

While they are passive and friendly to the player, they will attack almost all other aquatic mobs. It includes aggressive ones like drowned and elderly guardians, which means you can have an Axolotl army fighting with you.

If you kill the mobs one of these; Axolotls is targeting, they shall give you regeneration and remove mining fatigue. You shall even get an achievement for teaming up; it is like these Lil guys are there to help you conquer monuments.

You can breed axolotls by using buckets of tropical fish. But not the tropical fish item It is because, in real life, axolotls only live as fish.

Bucket of Axolotls in a Dispenser

You can put a bucket of axolotls in a dispenser and use Redstone to spawn your friend automatically.

Axolotls can survive out of water for a short time. But will always move towards the nearest water source as they die after being on land for 5 minutes. However, they won’t die during rain as fish do.

There are currently five axolotls colour variants in the game, but there were six. The extra unreleased one is a green variant, but you might be seeing them in the future on the topic of all of their different colours. Each Axolotl has exactly a 1 in 1200 chance to be blue. There are around 1200 axolotls left in the wild and a super small number that we need to try and increase. Blue axolotls don’t exist in real life.

Most of the time, it’ll just take after its parents, though! One of the other five colors is the white and pink ‘leucistic’ axolotls. But in texture files, it’s just called ‘lucy’. It must have been too hard for Mojang to spell over and over.