Town Of Salem: Tips to Win as Vampire

The vampire is a neutral chaos role and this role is not immune at night, so anybody willing to kill this character at night can get the job done easily. A vampire will appear to the sheriff as not suspicious. To an investigator, the vampire will appear as a doctor, a serial killer, or a vampire. Finally, a consigliere will be able to find out easily that you are a vampire.

There are numerous people that are immune to vampire bites: the mafia, the serial killer, executioner, arsonist, and the vampire hunter are all immune to a vampire bite. If you attempt to bite a vampire immune role, you will get a notification saying that you are failed to convert this particular person into a vampire. If you try to convert someone who is in jail, the conversion will not go through. If you target a person being healed by the doctor, the conversion will not go through. The person you were trying to bite will get a notification saying they were healed, and the doctor will not receive any information that they saved that person’s life. A vested survivor or a vested bodyguard will transform into a vampire occasionally. If you try to convert a veteran who is on alert, you will die and he will not be converted into a vampire. If you try to bite a person who is protected by a bodyguard, you will die. If you target a vigilante who shot a town member, you can convert him and prevent the guilt; however, this only works on the night when the vigilante shoots someone. So, if it’s a night after, the vigilante will die of guilt. 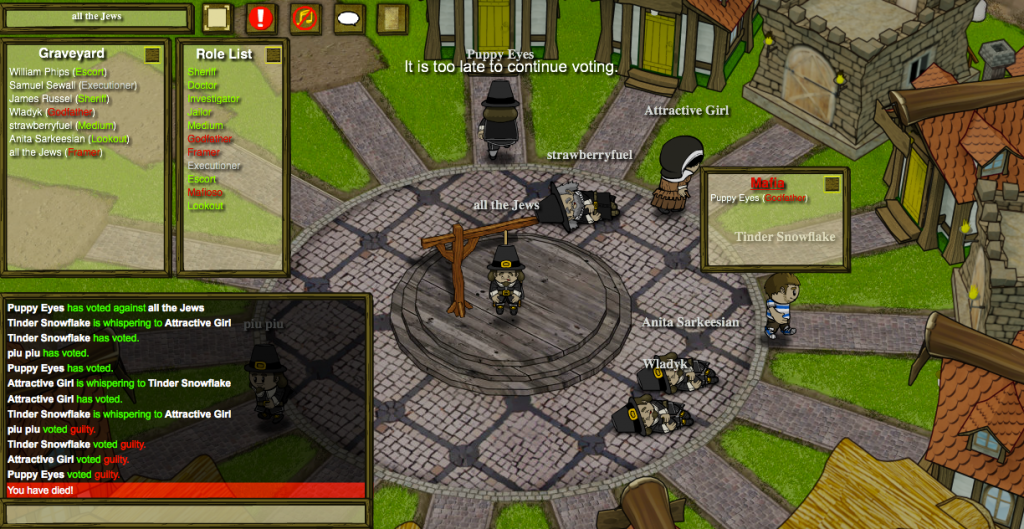 The vampire needs to think of what is the biggest factor in converting. The biggest risk to vampire victory is mafia because they can pick and kill the vampire at a faster rate than the vampires can recruit. Now, when the town members have the information to get the mafia lynched – the town members such as sheriff, spies, investigators – the vampires need to avoid converting them because those are the people that will remove the mafia. Vampire should never randomly try to lynch somebody even though as part of the Town of Salem’s killing-role kind of instinct; instead, they should be focused on getting the mafia lynched because they are the biggest threat to their victory. It is very much in the vampires’ interest to get the vampire hunter lynched. Now, if an angry vampire mob goes after a vampire hunter, probably they will manage to get the vampire hunter lynched. Now, if there is a second vampire hunter in the crowd, you should also try your best to get him lynched because he can also prove to be fatal.

Tactical vampire recruitment is also the key; if you convert the confirmed spy or mayor, it may be possible to test these people again to verify that whether they are turned into vampires or not. For example, a former revealed mayor will have one vote instead of three when he is turned into a vampire; now, your highest priority is the confirmed town roles which cannot visibly perform their actions such as a retributionist, a medium, a lookout, a doctor and a bodyguard. They can lead remaining town members into a false direction and are safest to convert.

Now, escorts, transporters, jesters, survivors, and amnesiacs, they are all good to target in the game and will increase the number of vampires significantly if attacked. Now, killing roles such as jailers, vigilantes, and even the veteran can be useful to vampires, but they can also be the bane of their existence. So, they can kill off the mafia or any mutual killing roles, but they can also kill off vampires. Now, in deciding when to target these roles you should look at how the game is playing out and think whether there are quite a lot of bad people; if there are, then probably there is time to kill them before they kill all the vampires.

Stay Normal after You Are Turned

Try to stay normal after you are turned and try to be as helpful to the town as you can. If you completely change your approach, the town will notice your actions, and probably they will vote against you and will get you hung. If the vampire isn’t included in the role list and you happen to be one then try to hide as long as possible. Now, the only way the town can know that they are vampires is if a vampire hunter dies, or if the vampire hunter tells the town that I am the vampire hunter. Otherwise, the town won’t suspect that there are vampires.

Use the information that you found out as a townie to inform yourself as a vampire. After you have been turned, you need to try and work out who is a potential target and who is a potential threat to your new team. If you were sheriff and before you died you found out someone was definitely mafia then tell it to your vampire friends because you don’t want to waste a night when you could convert a new vampire. If you are a spy, you should tell your friends who mafia visited. You will get a long list of townies, and you will get a list of neutral roles as well. This would be your contribution to the vampire community.