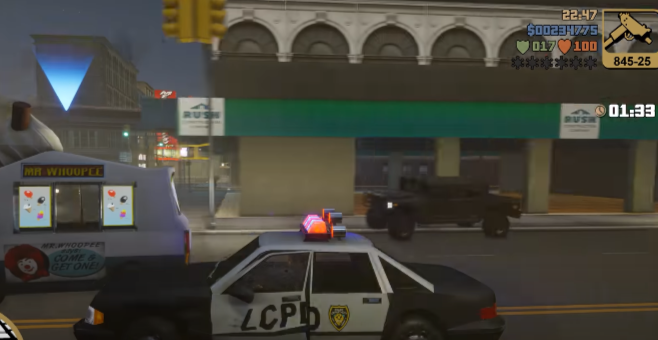 You will first need to find and get in a police car to start this side mission.

You have to chase down and kill criminals driving around the liberty city within a time limit in this mission.

You will unlock the trophy Going after killing 15 criminals in a row within a single mission.

It’s better to do this early on in Portland or Staunton island before the gangs become hostile towards Claude.

You have to make sure to stock up on Uzi ammo, it’s recommended to unlock Uzi pickup at your hideout by collecting 20 hidden packages.

The police car repairs itself a bit with every threat you eliminate.

You don’t have to kill all criminals in a row; you can stop whenever you want and continue another time.

You can check how many criminals you have killed in the stats menu.

For every five kills in a row, you will get a monetary reward; after every ten kills, you will be rewarded with a police bribe icon at your hideouts.

To make this side mission a bit easier, you can use the Rhino at Phil’s Army Surplus in North Rockford, Staunton Island.

The Rhino will unlock only after completing the story.

It’s important to note that the Rhino is very slow, and in some cases, you won’t be able to catch up to the criminal.

You will need to plan a route to intercept them; you can use the turret’s recoil to give you an extra boost of speed.

You have to grab a police bribe if you get a wanted level.

Mob Facts in Minecraft
Next Article