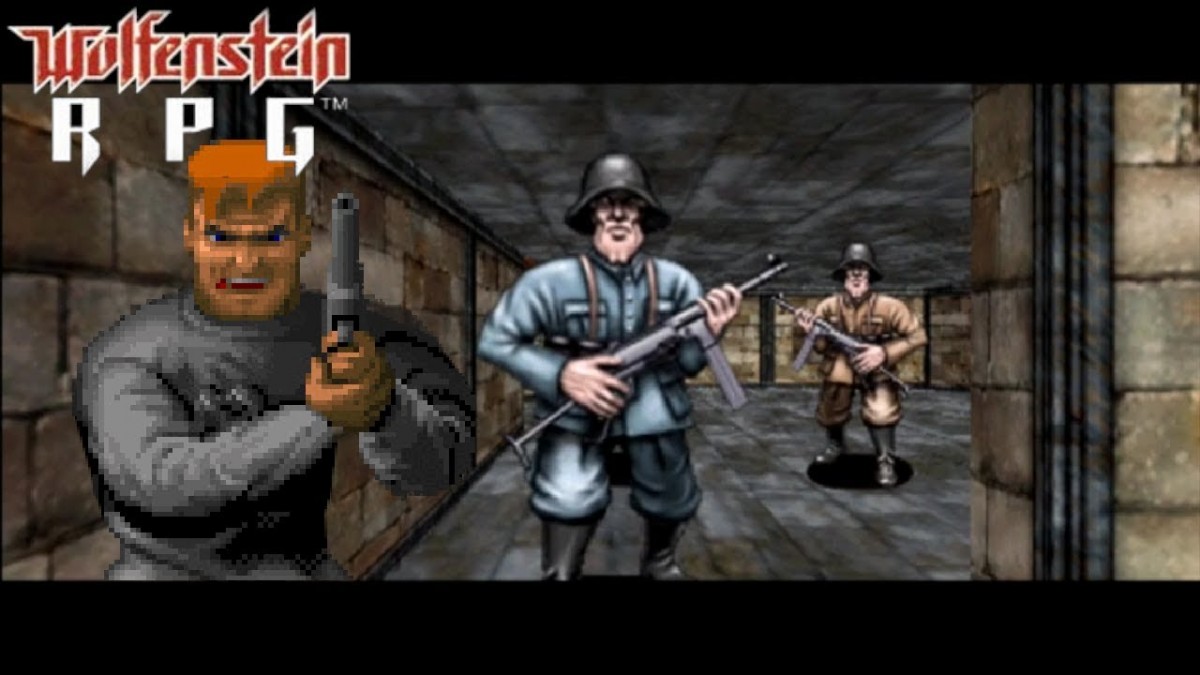 The Fodor’s Travel Guide to Castle Wolfenstein contains many useful phrases in German, so you can better understand your Axis oppressors as you fill them with lead or strap dynamite to their bodies. While the original Wolfenstein 3D took us on a tour of Nazi castles full of swastikas and dour-looking Hitler portraits, Wolfenstein RPG is decidedly lighter in tone, with mutant chickens, romance novels, and a playful giant named Gunther.

In fact, the only thing recognizable about this version of Wolfenstein is the arsenal, and the main character, BJ Blazkowicz. Everything else, from the tone to the gameplay, has been altered drastically.

Instead of freely running through levels, you’ll advance step-by-step using a turn-based battle system. When there are no enemies around, you might mistake this game at a glance for any other first person shooter. But once enemy soldiers appear (or zombies, female assassins, or mutant chickens, for that matter), you’ll have to take turns maneuvering around the room, lining up your opponents to exchange gunfire with them. A wide range of weapons, including flamethrowers, Gatling guns, and the occasional thrown toilet make every combat situation a great deal of fun, especially the game’s challenging boss fights.

Additional elements, like mixing syringes and reading books for attribute boosts, are surprisingly interesting. Others, like booting each and every breakable object in the game for an achievement, are less satisfying. And while the game is highly linear, you can replay it on tougher difficulty levels, with fewer health packs and tougher enemies. There are even two minor minigames and an on-rail shooter sequence to mix things up from the main storyline.

We found a lot of enjoyment in the Wolf RPG story, and we don’t want to spoil the game’s big surprises. But suffice to say, there are numerous references to other id and id mobile games, and plenty of surprising twists and ambushes. Humorous background details like portraits of Hitler with a soul patch instead of his famous mustache (originally meant to get around telecom censors for the mobile version of the game) help make the Wolf RPG experience quite memorable.

On the downside, Wolfenstein RPG was originally designed for mobile phones, and it does show. The graphics have been upscaled to make the sprites high resolution and the 3D animation smooth, but the quality is still a step below what you can find in Doom Resurrection, which was designed by id for the iPhone from the start. While the visuals don’t hurt Wolf RPG too much, it may turn off some graphics snobs.

Besides quality gameplay, humor and creativity score big points with us. The weird and silly Wolfenstein RPG is a welcome counterpart to the angry and serious Wolfenstein 3D. Both games deserve a place on your iPhone, and we’re expecting the same “dichotomy of man” split down the middle when they eventually bring Doom Classic and Doom 2 RPG to the iPhone. We tend to expect nothing but the best from id, and this time, they delivered.