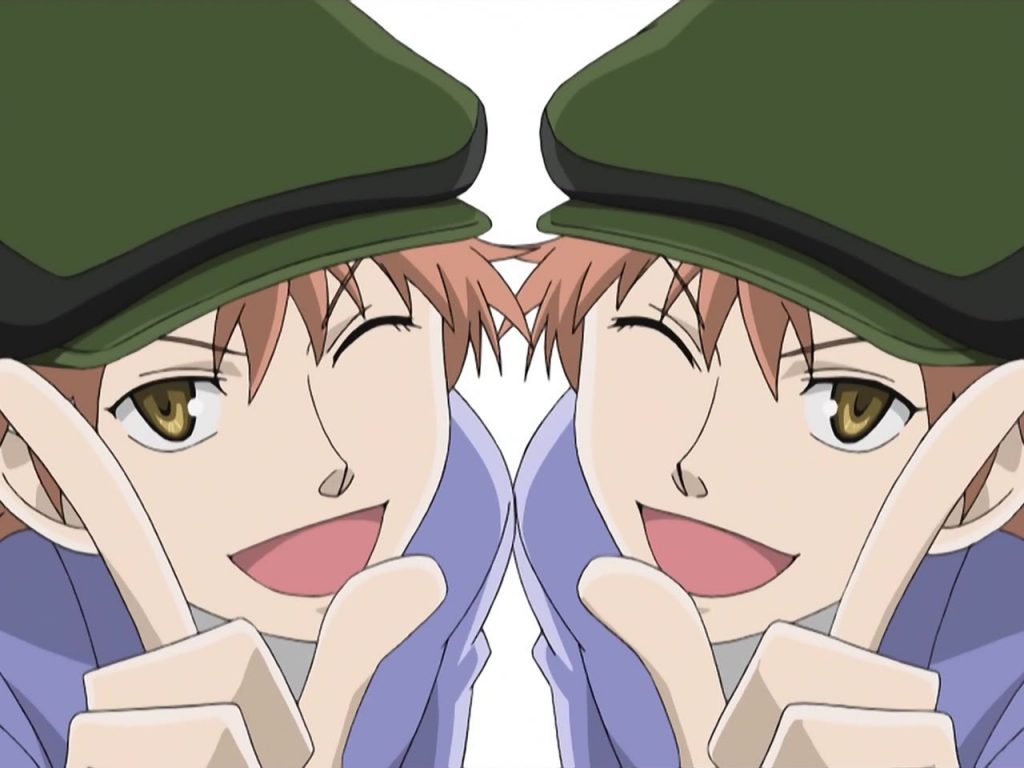 They are probably the most recognizable and most popular twins on this list since the show itself is so popular it’s one of the must-see anime. Can you recognize which one of them is Hikaru and which is Kaoru? No? Well, don’t worry because me neither. Not even their own family members (save for their parents) or their friends can tell who is who save for one and that would be the show’s main protagonist, Fujioka Haruhi.

Hikaru and Kaoru are both playful while they also act and sound completely the same which makes it hard for others to tell who is who. However, the two have completely different personalities that make them different from each other. Hikaru is a lot more immature and mistrustful while Kaoru is a lot more considerate and considerably nicer than Hikaru even if Hikaru is older than him.

From: Re:Zero -Starting Life in Another World- 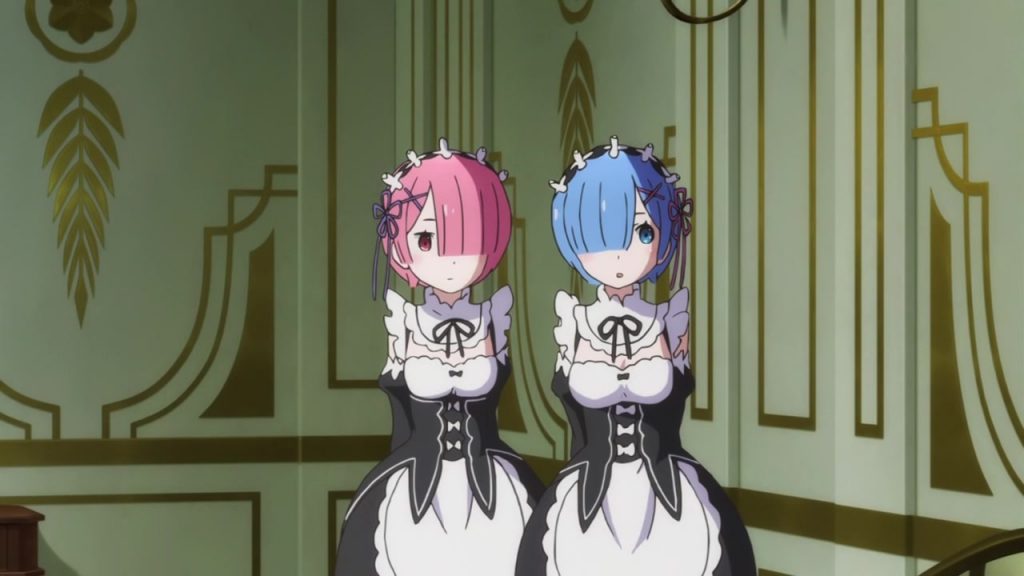 Personality-wise, the two are completely different as well. Ram is the most distrustful twin towards the main character, Natsuki Subaru. She is also clumsy in everything else except for her excellent cooking skills. Meanwhile, Rem moves with finesse and has the most skills between the two. She can cook and clean flawlessly unlike Ram.

The two get along very well and care for each other a lot, though this might be because it has something to do with their past that made them even closer. Both of them work as a servant for Roswaal L. Mathers in a huge mansion. 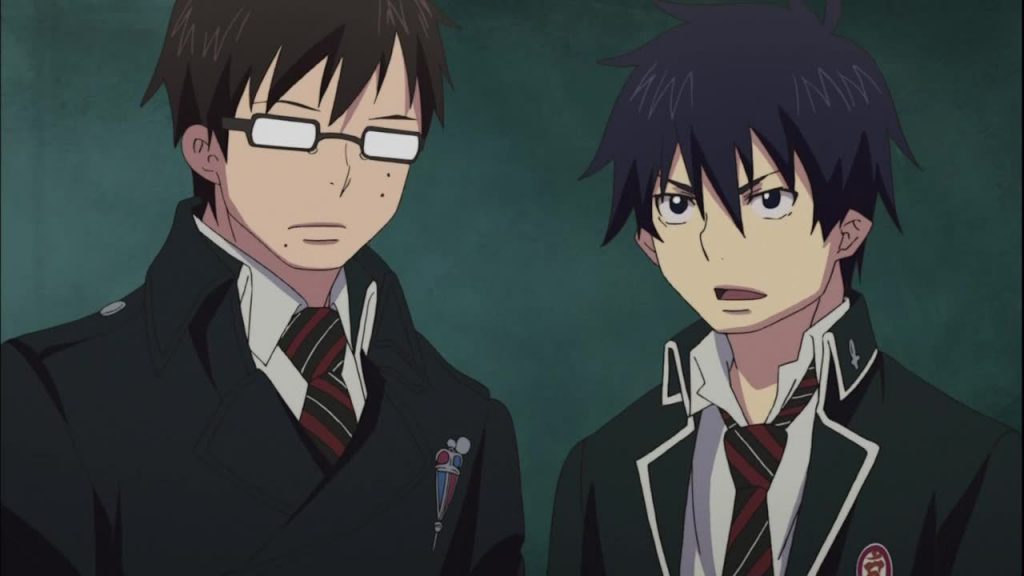 While both of them look nothing alike, Yukio and Rin Okumura are still twins. Born from the same mother although one of them has demonic powers that can use blue flames. Rin is the demonic younger twin brother while Yukio is the human older brother. They get along well most of the time and although they are twins, their personalities are the complete opposite of each other.

Yukio is a serious and studious student but very dependable. Meanwhile, Rin always gets into fights and can’t hold a job for very long. Because Rin gets into fights a lot, Yukio helps him by bandaging him whenever he gets hurt. Rin is also the main reason why he chose to became a doctor and an exorcist so he could become stronger and protect his younger brother. This goes to show how much he cares for him and Rin is also proud of Yukio’s achievements.

The intensity of how much they care for each other is very touching indeed! 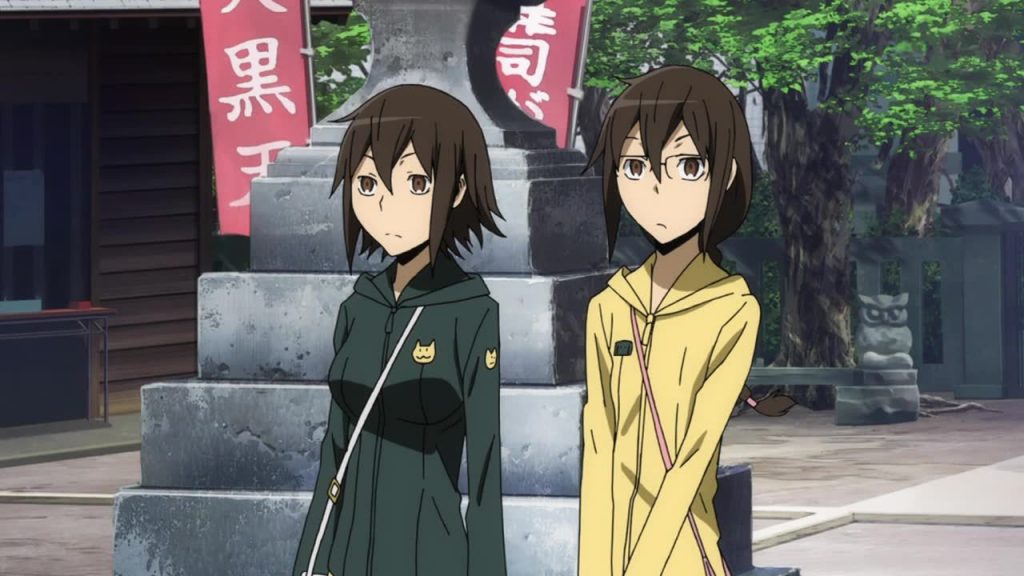 If you haven’t seen the show’s first season then you should watch them now. They don’t appear until the second season which is in Durarara!! x2. Mairu and Kururi are very identical in appearance but their different clothes make it easy to tell who is who. They don’t try to mirror each other’s actions or voice either unlike the Hitachiin brothers. Their personalities are completely different from each other as well.

Mairu is very lively and outgoing while Kururi is quiet and shy. They are total opposites. They get along well with each other and are very close. The twins are seen together all the time in the show. However, none of them are particularly close to their older brother Orihara Izaya. Both of them seem to be comfortable with each other’s company even without their older brother around.

From: Baka and Test – Summon the Beasts 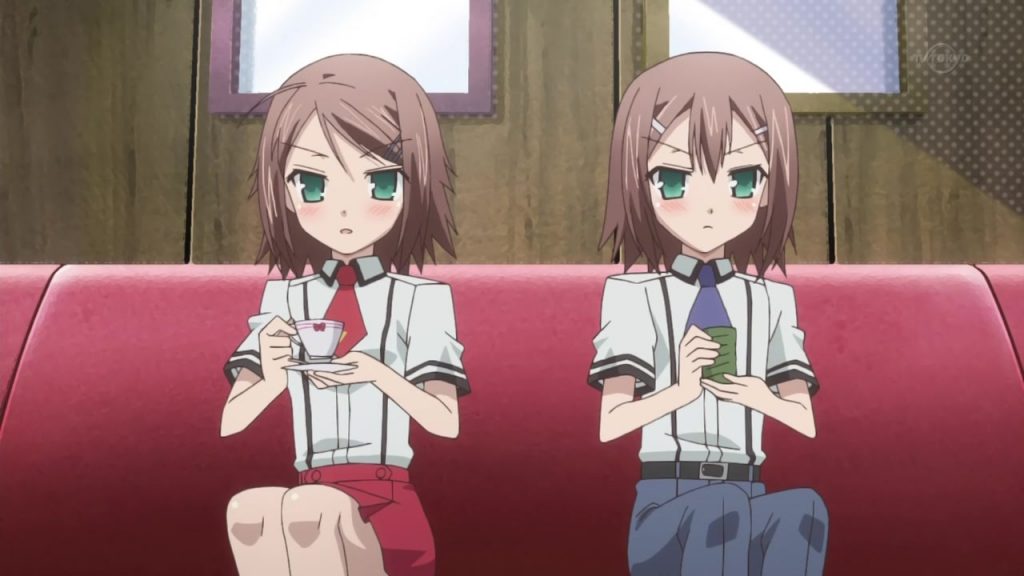 Their appearance may look exactly alike but the main difference between them is that Hideyoshi is a guy and Yuuko is a girl. Both of them go to the same school but they are separated in different classes. Hideyoshi is in class 2-F which is considered as the worst class with the worst classroom while her sister Yuuko is in 2-A, the class with the best class and the best classroom in the school. Yuuko is older than Hideyoshi by “3 minutes” which makes her the oldest twin between the two.

Yuuko is superior to Hideyoshi in terms of academics which is why she’s in the top class in the entire class. This is in contrast to her twin who is at the lowest class in their school. However, Hideyoshi is better than her with acting where she is tone-deaf and can’t act. He is also more popular in school and even gets three confessions every month. They get along sometimes but they do fight every now and then. Because Yuuko is superior to Hideyoshi in academics, she always calls him stupid. Their sibling rivalry isn’t all that bad though and they can get along sometimes. 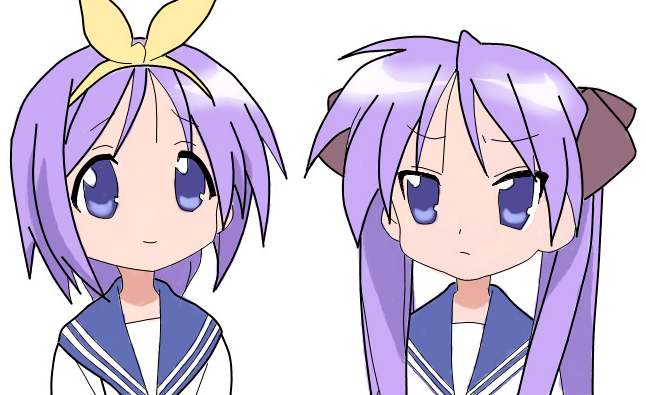 They both look alike but their hair length makes them distinguishable from each other. Tsukasa is the younger twin with the short hair while Kagami is the older twin with the long hair. They both attend the same school but is never in the same class.

Their personalities are opposites of each other. Tsukasa is generally feminine and falls in the anime trope of “moe” and often very clumsy and bad in academics. Unlike her sister, Kagami is a little boyish and enjoys playing video games. She also falls to the “tsundere” category and has good grades. Kagami is even class president of her class.

They get along with each other well enough and are close. Tsukasa asks her sister to help her with homework very often since she can’t understand any hard lessons. Kagami willingly helps her sister all the time to help her catch up. Most would say they have a very good sisterly relationship. 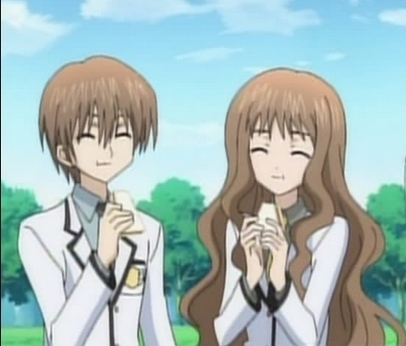 Their personalities are totally different from each other. Jun has a “split-personality” that allows him to be charming and irresistible whenever he gets surrounded by girls but is usually normal when he’s not overwhelmed by girls. Megumi usually brings a cardboard around for her to write on and communicate with others. She doesn’t talk because her voice is destructive and can hurt people if you are near her. However, it seems her voice is only harmless if she is singing and if you’re at a very far distance.

Both of them are usually together and are very close with each other. They are both also close with Tsuji Ryuu who is like their older brother who takes care of them both. The three are all inseparable.

Twins became one of the popular tropes in anime but they also have an aspect to follow in this trope. Whether or not they look alike, the twin’s most consistent feature is that their personalities are almost the exact opposite of each other. I think this is the most prominent charm in the “twin trope”.

Do you recognize any of the twins listed above?