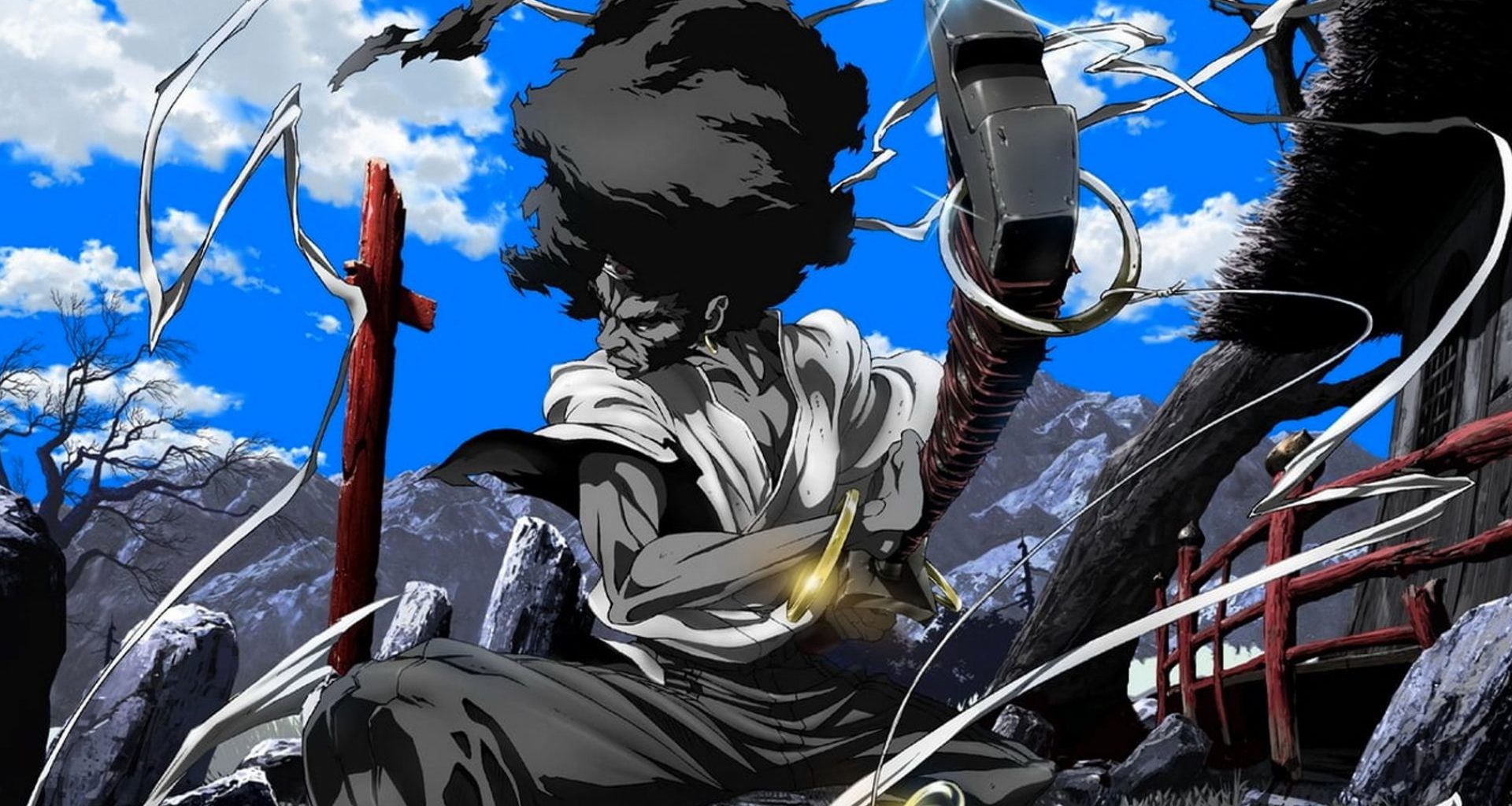 Starting as a Japanese Manga series, Afro Samurai can be described as a pop-culture concoction merging big hair, martial arts, feudal Japan, Blaxploitation and techno-infused hip-hop. Needless to say the end product is an interesting mix. But does it all come together to make a great video game?

Namco Bandai’s approach to the third-person hack and slash title manages to capture the essence of the cult series created by Takashi Okazaki. In fact the game looks like it has come straight out of the pages of a comic book thanks to the stylistic cel-shaded rendering approach to the graphics. But unfortunately Afro Samurai reminded me of Jennifer Love Hewitt – it may look gorgeous on the outside but when you actually try engaging with it, it tends to be somewhat broken on the inside. But more on that later on (Afro Samurai’s faults I mean, not Jennifer Love Hewitt).

The popularity of Afro Samurai on an international scale is made apparent through the Hollywood cast of stars who lent their voices to the game. Samuel L. Jackson as the titular role, Ron Perlman (Hellboy fame) and Kelly Hu (Scorpion King and who also voice-acted in Star Wars: Knights of the Old Republic) all produce impressive performances. Mr. Jackson, who voices both Afro Samurai and his alter-ego Ninja Ninja (yes, that’s his actual name) has ample dialogue which seems to have been written perfectly for the actor. His typical swearing and smart-ass remarks are littered throughout the game and at one point I was positive he was about to yell out “Get these mutha ***** snakes off my mutha ***** plane!!”. His dialogue for Afro himself is fairly brief, but as Ninja Ninja (Afro’s alter-ego and guide / tutor) his charmless banter is ideal for the game. To fans his voice appearance shouldn’t be a surprise as he was involved in the English version of the anime series of Afro Samurai that was created a couple of years back.

The high calibre voice-acting is supported brilliantly by the musical score that features in the game as well. Hip-hop beats with an ethnic flair suit the mood commendably, often increasing in tempo just as you enter a fray with eight ninjas.

As aforementioned, Afro Samurai is a piece of art with compelling cel-shaded rendered characters complemented by cross-hatched detailing and photo-realistic back-drops. The palette of the game is usually muted with greys to produce a dark, ominous hue that suits the tone of the game nicely. Even some of the story-telling methods seem straight out of a Grindhouse movie. Split-screen techniques will make you aware of other things that are happening at the same time, while not stopping the action. For example you could be in the middle of a battle and a second panel will appear showing you that three ninjas are entering from over a wall behind you. It’s stylish and gives the game a fluid feel to the action. The loading sequences give you bite-sized pieces of a greater story too via dream-like visions that Afro has (most of which seem to revolve around his childhood and past). To be honest, the storyline may be a bit hard for non-fans to get a grip on… for example Afro’s main quest is searching for a mystical head-band that can ultimately rule the world (and keep his bushy ‘fro in check). But this doesn’t prevent you from enjoying the ride – even if you are scratching your head in confusion at times.

Now at this stage, after waffling on about how great the graphics and sound are you are probably thinking, “yeah, but what is the game like to play?” Unfortunately, the gameplay does not live up to the game’s amazing presentation. Some of this is actually due to the visual style of the game. To achieve a cinematic feel, the developers have opted for a HUD-less design, which certainly is nice on the eye. But occasionally you will want to know more information, such as where you should be heading next and exactly how much health you have. In order to get your bearings you can press down on the D-Pad in order to summon Ninja Ninja who will appear in a puff of smoke in the direction you should be heading. It’s a clever idea but unfortunately if you’re not looking in the right direction you will often scan the entire area trying to locate him and that to me kinda defies the point of a GPS. Not to mention he might sometimes appear behind a wall. The health problem isn’t quite so bad as you can tell when you are near death thanks to an increasing thump of your own heart-beat and your white samurai garb becoming stained with blood. Unfortunately though your health seems to teeter between being perfectly fit to near death with little in between.

Combat wise the game is well implemented, offering one of the better hack and slash titles on the market. The controls are fairly basic though, with a light attack, a strong attack and then a kick using the X, Y and B buttons respectively. The right trigger lets you block or parry and the left trigger activates your Focus. As many will know, this whole concept of Focus mode (or bullet-time) has been done to death. But the slow-mo effect in Afro Samurai really is impressive to watch. Firstly you build up Focus by performing combos and by holding down the left trigger you can bring all the action around you to a crawl. This slow-motion effect is amplified thanks to a greyscale effect that causes everything around you to turn black and white. From here you can choose to use one of your three attacks and line up a devastating blow with rewardingly gory consequences. For example holding down Y and releasing at the right time might slice an enemy perfectly down the middle. Holding X will allow you to severe an arm or a leg. The Focus mode even draws a faint line across exactly where your sword will strike that allows you to precisely line-up how you want to dismember your foe. If you feel like knee-capping a ninja just lower your blade slightly and so forth. The game is also quick to reward you for your different finishing moves with gamer points on the Xbox 360 version. To be honest though, just the visuals of having body parts flying all around the screen in stylish slow-mo is reward enough.

Slicing up drones for hours is fun thanks to the Focus mode. But Afro Samurai also has a colourful mix of bad guys to encounter to mix things up. They include giant-sized dudes who swing tree-trunk sized poles around, Ronin who would prefer to commit Hara-kiri than fall to your blade and semi-naked, heavily tattooed female Ninja strippers. Did we mention the game is R18?

Finally, and I have saved the worst to last, the biggest gripe with Afro Samurai is the camera angles. Sadly it seems that you are fighting dozens of enemies for half the game, and then battling the camera for the other half. When battling multiple enemies it tends to leave most of the action out of frame. The platforming aspects where you simply have to jump from a ledge can cause unnecessary anguish too due to the fact that you didn’t see a gap coming. Possibly the weirdest thing about the camera issue is that you can’t change the camera options while in the game. You have to quit the game and go back to the front menu in order to flip the axis to suit. Even once you do have it mapped to suit though, there will be the occasional point where you will find yourself straining your neck to get “that perfect angle” that the game never gives you.

Despite that though, there is still no denying that Afro Samurai is an entertaining visual treat. The aesthetics of the game are a joy to behold and when you get into the zone you are bound to witness gory scenes of pure awesomeness. The game seems to bathe in its own coolness but thanks to humourous elements from Samuel L. Jackson, it doesn’t seem to be trying too hard either.