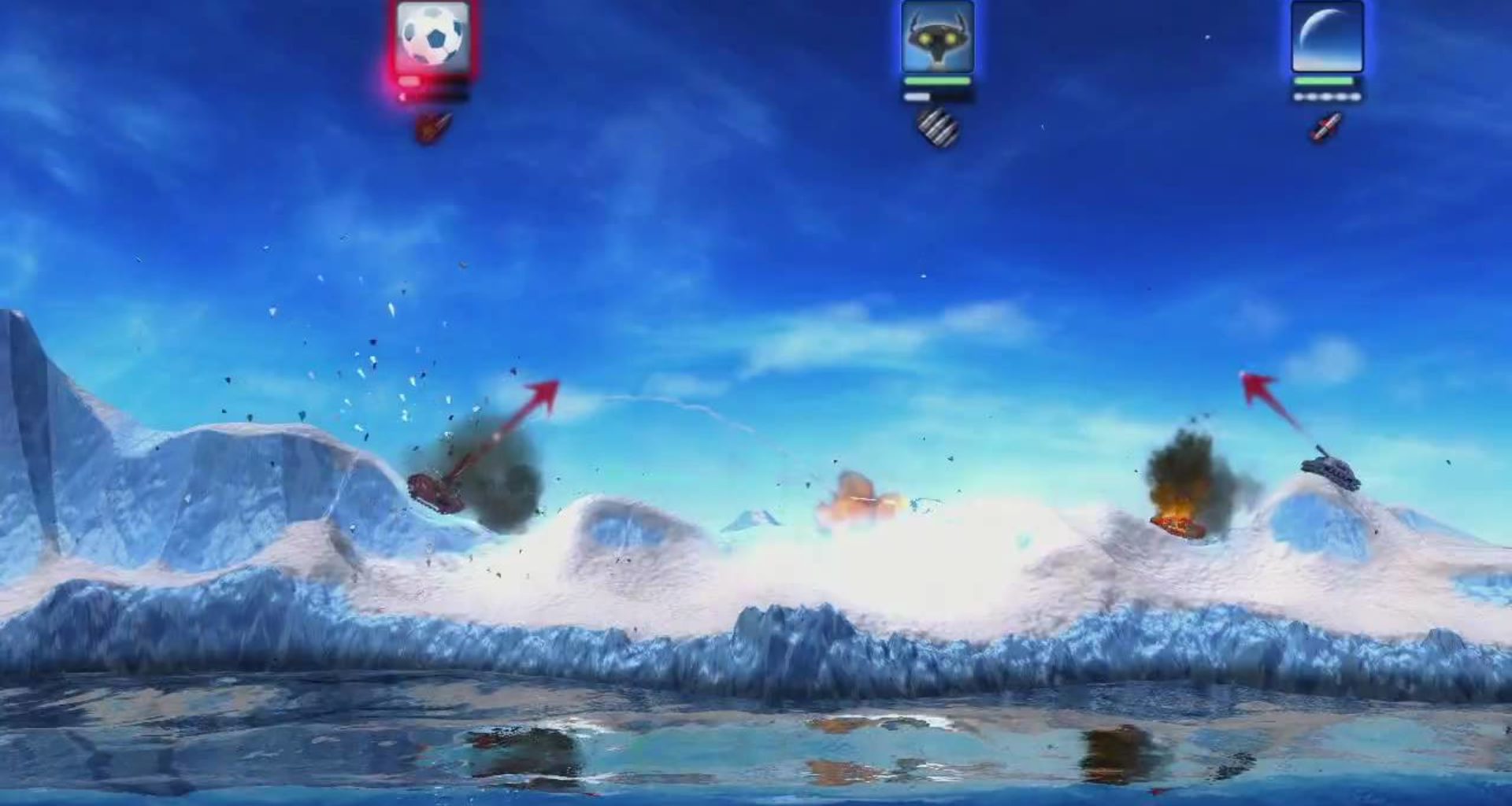 Back in the day I used to love a little game called Scorched Earth. Now a lot of people won’t know this title, so I’ll explain it as being a lot like worms (but older). Only you have one Worm each. Playing this game with your mates was fairly simple, but enormously entertaining.

When I saw a game called ‘Death Tank’ on the latest XBOX Live Arcade, I had to look into it. Generic names such as that really bring back old school yearnings. Looking at the screenshots, the game looked just like Scorched Earth with a new set of paint. I had to have it.

As soon as you start a game of Death Tank, one difference between this and Scorched Earth (or Worms) is immediately apparent. This game is in real time. Instead of waiting your turn, your next shot is always charging up. You can constantly adjust your aim and move while waiting for your next shot. Not only does this eliminate the annoying waiting between turns, but it also opens up the ability to dodge.

Death Tank may not be quite as deep as say Worms, which is also on XBLA but will appeal more to action fans, or people like myself that have maybe just played Worms a little bit too much now. Whereas Worms suffers (only slightly) from lack of keyboard and mouse, Death Tanks control scheme embraces the XBOX controller and is immensely intuitive after a couple of games. An arrow marker appears out of your tank, moving your analogue stick changes your arrow depending on power and direction. A dot makes its way up the arrow to let you know how far away your next shot is. The whole arrow turning green means FIRE!

You can play Death Tank against AI, but of course the game is at its best when you are playing against real people. You can do this online, with multiple players on one television, or a combination (Max 8 players). If you have a fairly full game then the first few shots are pure mayhem. Once a few people have been eliminated things settle down a bit and you can allow for a bit more skill/strategy instead of who was unlucky enough to be in the thick of it. Being eliminated first is always a little annoying, but that’s just part of the game.

Because each game is pretty short by itself, matches usually consist of twenty rounds. After each round you can buy power-ups with your kills and bonuses from previous battles. You can also choose a few game modes, such as small or large teams, but I usually prefer the craziness that is the all on all mode. Even though I have been playing in some pretty large games full of Americans, lag has been rare and not enough yet to really disturb game play.

To keep things spicy there are a number of weapons to play with. The machine gun is for close encounters. Nukes, you do not want to be close to. My personal favourite are rolling rounds which don’t explode until they roll into a player or get run over. You can also buy evasive and defensive power ups such as jet boosters for you tank which let you shortly fly over the terrain. You will need to familiarise yourself with all of these gadgets if you really want to dominate the game.

So far Death Tank is one of the most enjoyable experiences I have had on Microsoft’s Live service. Games are usually full of accidental hilarity punctuated with the odd showcase of raw skill. Just don’t take the game too seriously or you run the risk of throwing your controller through the TV when you are eliminated first for a few rounds in a row.