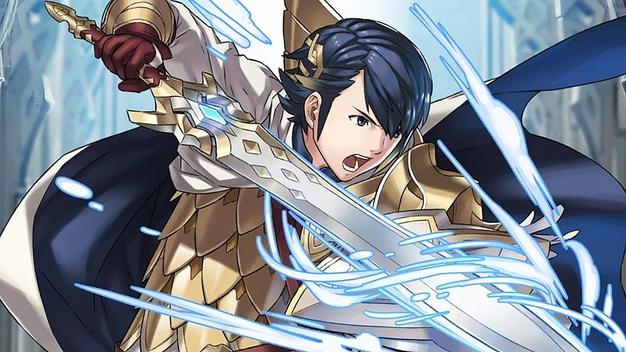 Soren is from the world of Fire Emblem: Path of Radiance. He is one of the featured heroes in New Heroes: World of Radiance Summoning Event that runs from April 26 16:00 JST to May 15 15:59 JST.

Soren is the son of King Ashnard and Almedha. He was born without special powers. At a very young age, he got separated from his parents and got taken in by a woman who’s doing it “out of duty”. When he reached around 4 years old, he got adopted by an old Sage and trained him in the arts of magic.

He is a Green Orb unit with a 5★ rarity. His movement speed is that of an Infantry.

Rexcalibur is a potent wind tome in Fire Emblem: Path of Radiance. In Fire Emblem Heroes, it has 13 Might and 2 Range Points and no additional abilities.

Rising Wind and Growing Wind is also Merric’s Special Skill. The Rising Wind has the ability of damaging the area near the target with damage equal to unit’s ATK minus foe’s DEF or RES. The Growing Wind also has the same ability but targets a wider area.

If Soren initiates the attack, no follow-up will occur. If he’s facing a foe with magic, staff, or dragonstone: if unit’s SPD minus foe’s SPD is greater or equal to (5/3/1), foe can not attack.

This Passive Skill can give adjacent allies a Res (+2/+3/+4) on their next action at the start of the turn.

Although his Weapon Skill, Rexcalibur+ doesn’t have any abilities, Soren has Growing Wind that can deal a wide area damage near his target. This is enough to slowly chip away the HP of the opponent’s team.

He also has that Watersweep Passive Skill, which is new in the game. This Passive Skill can easily sweep away other Mages, Staff, and Dragons as they can not counterattack. It can also stop any follow-up attack from other foes if Soren initiates the attack.

Basing on Soren’s stats, he has a very high ATK, HP and SPD. As a Green Tome user, it is no surprise that his DEF is low.