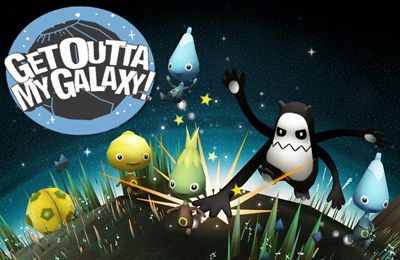 Get Outta My Galaxy Review

At first glance, Get Outta My Galaxy looks like little more than an iOS clone of Super Mario Galaxy. Both games take place in a gorgeous space-themed universe filled with small, spherical stages. But that’s about all they have in common. GOMG isn’t a platformer game at all; in fact you can’t even jump. It’s a little strange, and the difficulty can be uneven at times, but GOMG is a fun experience that’s like little else in the App Store.

You play as a xenophobic, multi-armed alien who’s had it with all of the tiny plant-like creatures that have taken up residence in his galaxy, and he’s going to do something about it. The goal in each stage is to rid that particular planet of all unwelcome aliens, which is done by slapping them away. With four arms that stretch like rubber, the protagonist is aptly suited for this task. You move around the spherical stages by tilting your iOS device and slap by tapping on the screen. It works well enough, though the tilt controls can feel a tad sluggish at times and it’s easy to get stuck on bits of the environment, like walls or boulders.

Though the aliens you’ll be slapping about are all of the same race, there’s quite a few of them to deal with. Some can plant themselves in the ground and multiply, others produce plants for camouflage, and some will explode when slapped, forcing you to keep your distance. Once you’ve slapped away all the aliens on a given planet, a strange stone structure will light up and take you to your next destination.

Each stage consists of a small planet, complete with plenty of obstacles. There are spikes and aggressive plants to avoid, as well as switches to flip and mazes to figure out. You can also gather power-ups that let you do everything from freeze the surrounding area to slap with explosive power.

The range in difficulty is also pretty significant. In the beginning the level requirements amount to little more than running around and slapping everything in sight. Later levels become more complex, with mazes, enemies, and simple puzzles. The problem is that you’ll be able to finish some of these later levels stages very quickly, while others will take several minutes and likely a few tries. This gives the game an uneven feel.

Where GOMG isn’t lacking, though, is in presentation. The 3D world looks beautiful and runs smoothly, even when there’s lots going on. Some of special effects, especially when the stone towers light up, look very impressive. The aliens you’ll be slapping about resemble the plant-like Pikmin, and come in a wide range of colors and shapes. It looks like a console title crammed down onto your phone.

Even with the uneven difficulty and occasionally spotty controls, GOMG is still worth your time. The bite-sized levels are fun, frantic, and perfectly suited for a mobile device. You’ll spend the entire game slapping aliens around, and that doesn’t get old.