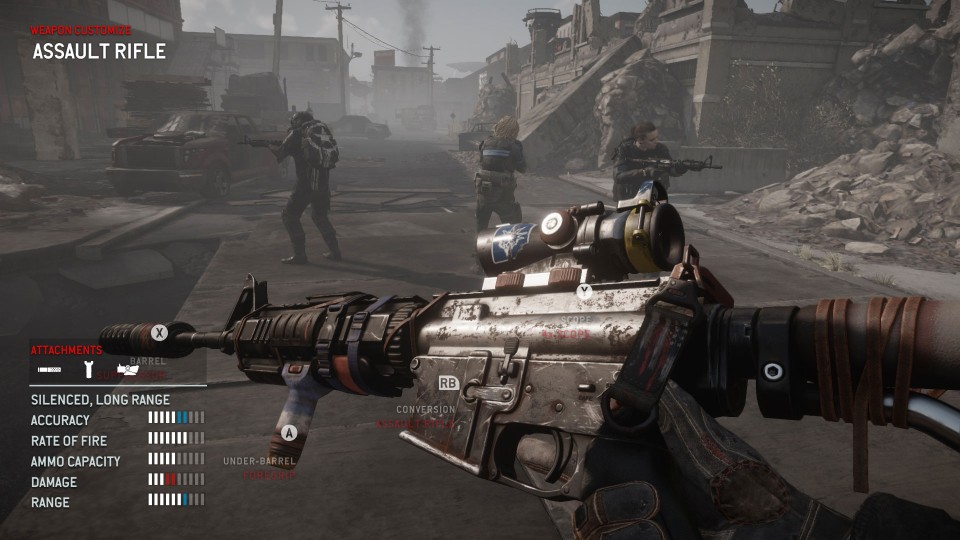 Homefront: The Revolution is a game with flaws. Lots of flaws. Nothing about the game is particularly broken, it’s just so many things seem to be done poorly or are just jarringly ill-fitted.

At its most basic, Homefront: The Revolution (H:TR) is a first person shooter set in a world where North Korea has taken over America (I’ll come back to this), and you are part of the Resistance starting the titular revolution. The action takes place in a series of small, open world environments in this fictional version of Philadelphia. Each environment corresponds to a stage of the game and will require you to do a series of tasks (basically capturing strategic points, until you’ve done enough to move on to the next stage.

These environments might be the only thing I really liked about H:TR. Some areas are “red zones” which are bombed out and mostly ruined neighbourhoods. It felt cool scurrying from abandoned building to abandoned building, hiding from patrols and face-scanning drones. Some areas are residential and so you need to stow your gun and not attract attention. But as you stir up more trouble the signs of revolt become more evident.

The environments do suffer from the “trash everywhere” problem. You know the one where there’s newspapers lying on every surface and just crap everywhere? I know it’s an underground guerilla army, but why is there so much rubbish?

This is a minor niggle though, especially compared with your fellow resistance fighters. They will walk into you at any given moment. They will also trap you in corners or block doorways, repeating the same lines over and over. “Watch it buddy”, “out of the way”, “hey I don’t want any trouble”; if you don’t want trouble then get out of my way! The NPCs seem to be generated from a small pool of faces, bodies and equipment, so be prepared to see the same people again and again; including the female fighter who seems to have forgotten how to button her combat vest all the way up.

Though at least she can breathe; in one zone that required a gas mask resistance fighters would constantly spawn without them. Also the gas mask didn’t actually do anything. You are given it, automatically put it on and there’s no change in your vision or breathing or anything. It even shows up in your inventory with a button to “use” but you can’t! Like much of the game, it’s out of your control.

Gameplay is pretty basic run and shoot (or run and avoid shooting in the civilian areas). There is a feature where you can modify your weapon, so you can make an assault rifle into a rpg launcher, a normal rifle into a sniper rifle, or a pistol into a one-shot silent assassin tool.

Oh yeah you have a phone. It’s primarily used to access the map, mission logs, or to use the camera for side-quests; but you can also get messages on it. Lots of messages, and often the same one repeated, from various characters reminding you of something inane and unhelpful. But if you don’t read them a little message icon appears on your HUD and doesn’t go away until you open up the phone.

Sometimes you’ll come across motorcycles in the red zones. They can be used to reach certain goals or just get across the map quickly. Well, “quickly”. Riding a motorcycle in a first-person shooter, with crazy terrain and terrible driving controls is the worst idea. Some areas need a motorcycle to get to or to run a generator, so there’s no avoiding them. Expect to bounce sideways just as you get to the ramp you need to hit dead on.

The resistance is literally an underground movement. They use tunnels to get between the different zones. Dotted around each zone are tunnel entrances that say where they go to. I thought I’d use one to go back and capture something I had missed in the last stage. Bad idea. I travelled there, did the side mission and then couldn’t go back, the tunnel didn’t go both ways. I had to make my way through three different areas to get back to where I had been.

The biggest issue with gameplay was the autosave feature. We’re all used to autosave these days; the swirling icon that either means you’ve just added something to your character or that presages an encounter. In H:TR the autosave feature also means that the game will freeze for a few seconds. It’s an ugly glitch and one that ruins that feeling I described earlier of dashing from cover and hoping that the patrol won’t see you. It’s a pretty big glitch and I am surprised it hasn’t been patched out yet.

Homefront can’t even keep up on the story side.

As I mentioned, America has been taken over by North Korea, via a company called Apex which is set up as an Asian version of Apple (though not really because Apple doesn’t make weapons and manufacture all of their products in Asia anyway). The country is now being run by a foreign military and it’s up to a group of organised militia to take back their country through a series of bombings and raids. Sound familiar?

It’s hard to empathise with the gung-ho Americans looking to take back their country after the past two decades where America seems to have done that to Iraq. And there is no mention of this save a passing throw away to “America’s costly wars in the Middle East” during the intro video. There is no political commentary of any sort. The game feels like the developers just quickly cooked up a way to have America be the underdog without thinking about wider story elements. A game where America invaded Korea would certainly be more on the nose than the other way around.

In this ill-fitting story, you play as Brady a typical faceless and voiceless protagonist. Everyone talks at you, telling you what to do and when. Volunteering you for dangerous missions without even a nod from you. This makes you feel less involved in the game and disconnected from the character you’re playing. Heck, even the Master Chief eventually got a voice.

All in all, Homefront: The Revolution is a lacklustre game. It fails to hit any of the beats it needs to properly immerse you in gameplay. Brady is a nothing-character tumbling through a dumb story and always on the frontlines for no discernable reason. You can’t relate to him and it takes a lot of fudging to relate to the resistance in the current world political climate. Homefront feels like a sad failure.