How To Raid A Base In Last Day On Earth

This brief guide will tell you everything about the Raid System (Pro Tips). You will learn how To Raid A Base on the Last Day On Earth: survival.

So previously, anyone could raid, but after season 10, devs changed it only for skilled survivors. So, the minimum level of participation is 150+.

Once you reach the 150th level, you’ll find raiders on your radio.

Accept, and raiders will be there in a moment.

You have to do five tasks for raiders. Tasks can be different every time.

You can use coins to skip the tasks. If you refuse, the current task progress will reset.

Once you refuse, you can call them through the radio, but tasks will be the same. So no point in refusing them and complete those tasks.

How to raid a base?

After you complete the tasks, raiders give you a mark (base) to raid on the map.

Once you find a base, you have to research the base. Research is important because you don’t know what is inside the base.

You can’t destroy level 4 walls as metal cutters are not available in the game now.

Three waves of zombies spawn around 20, 50, 70 noise showed in meters.

Use only firearms with silencers. Otherwise, the noise will increase. You can use the melee weapons, too (melee weapons don’t make noise).

You can refill bottles if the AI has choppers and fuel in it.

You can use the suicide trick only once, use spikes or zombies. You’ll spawn in the base, take items from the chopper and then come back.

Remember, the suicide trick only work once in a raid. You can use a chopper trick to block the zombies. First, you have to empty your chopper tank.

Block walls like you can enter zombies can’t. You can place a chopper if there is no object within one tile.

Here you see zombies spawned but can’t enter. You can use spikes to kill the zombies.

When the noise meter reaches 100(max), a big one spawns with three bloaters.

Immediately go near walls. Otherwise, a big one teleports in the base. Within six seconds, you have to loot then get slapped from the big one. Otherwise, he will teleport inside, and you may die.

Once you’re done, get out of the base.

You have shared your loot with raiders as they helped you find a base! You can give something valuable like a modded spear.

If the raider says it seems true and something else, that means he is satisfied.

You can share, and they will leave the base. If you put garbage or give nothing important, then this message pops! 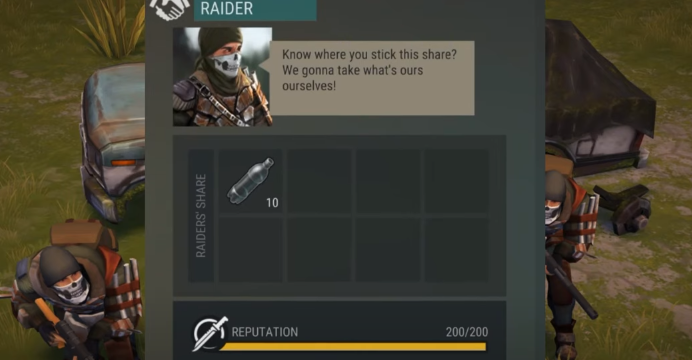 If you give nothing, they will destroy your base, and your reputation goes down.

After 2 hours, they will be back with max power!

Before season 10, they dropped swat set, vss if you killed them, no SWAT armor. But developers reduced the drop rate. So, the thick trick is not working, a wasted land mine! So don’t waste your land mine.

The threat of attack or revenge raid:

Once you raid a base, you will find a skull with a timer on the top right side of the screen.

That means within a day, your base can be raided.

Here you see one skull, which means a chance to be raided.

But if you had four skulls, that means the base has more chance to be raided. Your base will be raided if you are offline, not in the base.

Once you are raided by survivors (AI actually), this message will pop up.

If the thieves steal, mostly they will leave footsteps, and you can raid the base. You can find it on the map. But if they haven’t left any footsteps, you won’t find a base on the map.

Revenge raid and base design

If you want a revenge raid, make a bait chest and put something valuable. Don’t use stackable items, like broken melees, spears, etc. If you make a honeycomb base with ⅔ (level1 wall) outer layers like me, your base is protected.

But for zombies horde, you will need to make at least level 3 outer walls. Otherwise, every day you need to waste 15-20 Pine logs!

Don’t make other layers (all sides) with level 3 walls; raiders use c4s!

Most of the time, AI raiders will destroy 20-25 outer walls from every side! Like some from east, from the north, from the west, like that!

Put your best stuff inside and protect with level ⅔ walls.