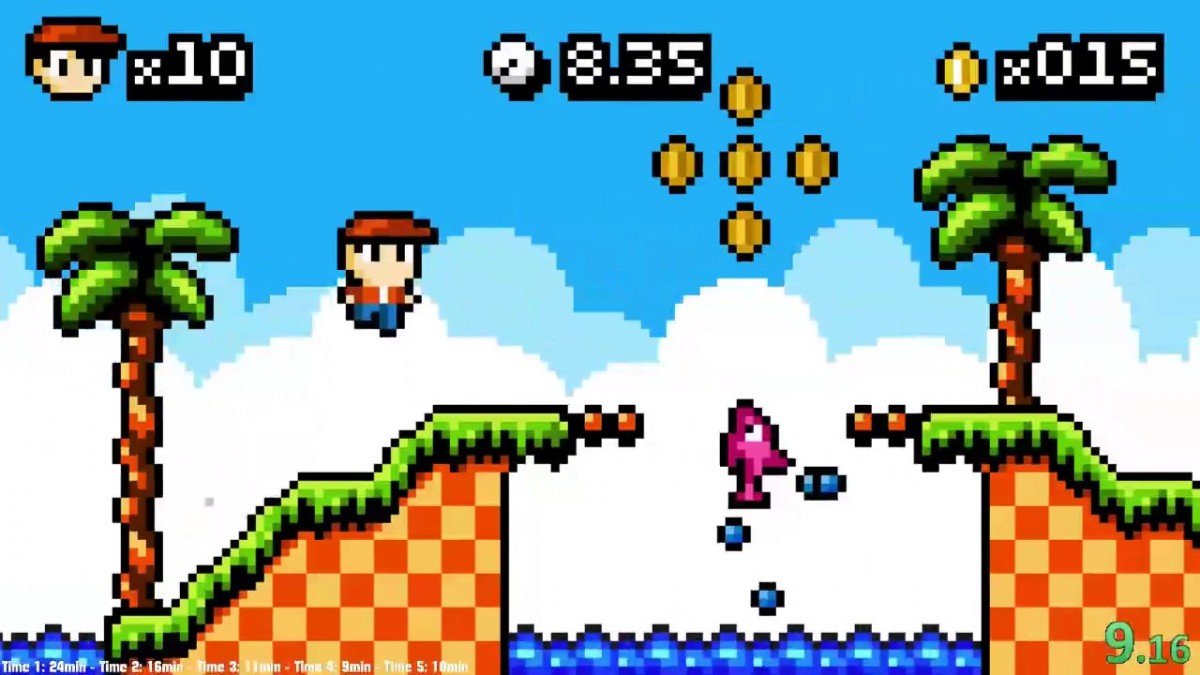 Kid Tripp doesn’t bother with a story or bonus content, but that’s not to say that it’s a light, fluffy game. Kid Tripp is a hardcore game for players with nerves of steel. It’s an homage to retro platformers of long-gone consoles, and it’s also a proving ground for all those gamers you know who claim to the best. Kid Tripp will separate the veterans from the rookies.

The game is similar to a basic two-dimensional platformer. Each level throws enemies and obstacles at you, and your job is to defeat or avoid them in order to reach the goal. By tapping on the left side of the screen, Kid Tripp will jump. Tapping longer or shorter affects the height of the jump. By tapping on the right side of the screen, Kid Tripp will throw a rock. This is necessary for taking some enemies out, while others can be defeated by simply jumping on them.

The catch is that your character moves automatically, so it’s your job to jump or throw at exactly the right moment. On top of that, the levels are extremely difficult. Some jumps require absolute precision, and enemies come out of nowhere. The entire game takes a large amount of patience, and you will only win by using trial-and-error.

Luckily, the developer hasn’t made it too difficult on you. The game always lets you continue playing at the last level you played, so even if you do run out of lives, you won’t find a real game over screen. You can also collect coins to gain more lives, but if you run out of lives and need to continue, you’ll lose all your coins.

The graphics and soundtrack, as well as the gameplay, are all heavily influenced by old 8-bit games. On every device, the levels look crisp and clean. Since the controls don’t require onscreen buttons, you have full view of the level, with only a limited HUD at the top of the screen. Unfortunately, the game is not optimized for the iPhone 5 displays yet, which means you’ll get black bars on both sides of the screen.

One of the elements of this game that impressed me the most was the game’s soundtrack. Every song is reminiscent of this older era in gaming, while also being completely catchy. It’s a wonderful addition and can keep you energized while getting your butt kicked in the game. Don’t miss out by playing without the sound.

Despite the game’s difficulty, Kid Tripp is a wonderful and simple look back at a much-loved era in gaming. It’s not an easy walk down memory lane, though, so players looking for a relaxing game should definitely avoid this title. This game is a challenge from the very beginning and will require a gamer with steely resolve to get to the finish line.