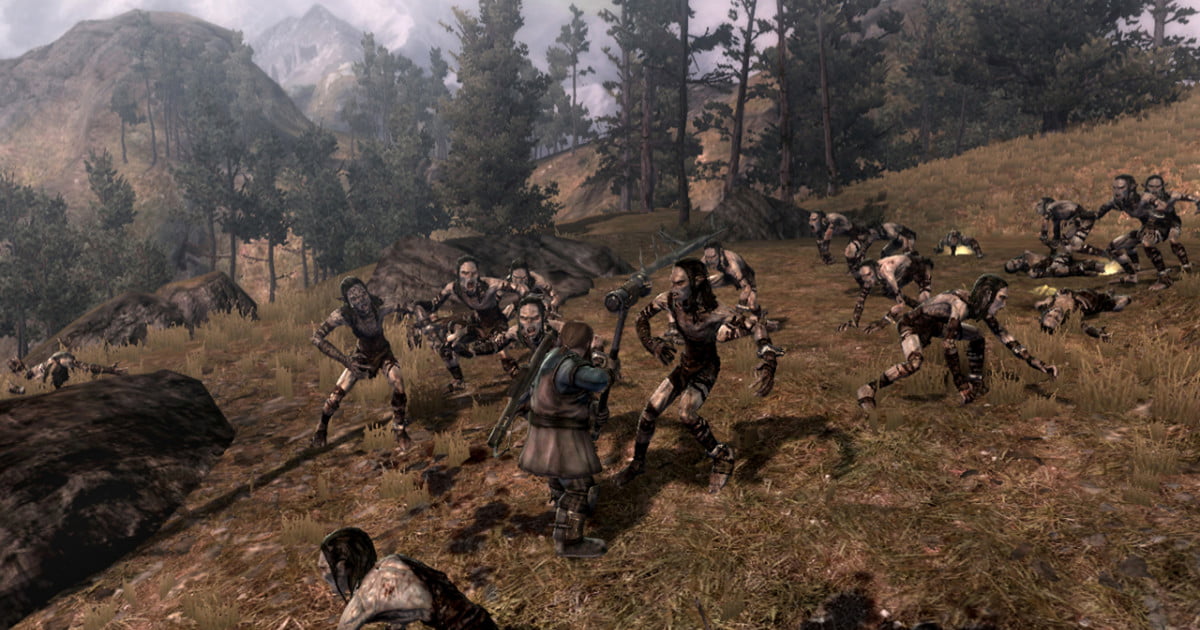 Lord of the Rings: War in the North Review

Since we’ve all read Lord of the Rings (you haven’t? You must have been living in a troll cave!), we already know all about its comprehensive and detailed telling of the journey of the fellowship. What you might have missed, however, is that there were other heroes involved, too.

Lord of the Rings: War in the North follows the trials and tribulations of three such heroes. Farin the Dwarf, Andriel the Elf, and Eradan the human Ranger, as they hold the forces of evil in check in the northern regions of Middle Earth.

The game format is a standard third-person hack and slash, where combos and critical-hits are rewarded with greater damage. You also have special moves, class-specific abilities, and a simple – but well thought out – role-playing element.

Each character can then be further fleshed out by way of three different skill trees, where they can specialise and gain abilities in ranged combat, melee, and support skills.

What we liked a lot is the way that the design is all about complimentary skills between characters. This is very important when it comes to online play, where success comes from understanding the role of each of the characters.

The Dwarf, despite having some ranged combat skills with his crossbow, is largely the tank of the team. WIth the right combination of skill points, he pulls in the enemies and holds their attention while the other members of the team wear them down.

The Ranger, who’s all about dealing damage from a distance, has a good ranged skill tree – and, unlike the Dwarf, has a lot more ammunition to throw about. Guided arrows and increased damage means he can quickly take down his foes.

With the Elven caster character, it is tempting to go down the damage skill tree to increase her ranged offensive magic capabilities but, for online play, her best skills lay in how she can heal other party members.

Combat, while not complex, can be very exciting. The designers have taken the standard Lord of the Rings monsters and set up some challenging combat scenarios. Enemies burst through and climb down walls, explode, breath gas, and can quickly overcome you if you don’t work as a team.

If you do get knocked down below zero health, a nearby character can revive you (a good twist to this familiar concept is that, if you are near death, you can crawl to another character to get a revive rather than force them to come to you). It’s all on a timer, though, so if you ignore your team mate and they die, the game resets to the last save point.

This forced co-operation also carries over to how the loot is handled. Everyone gets their own loot to pick up; if you open a chest, every team member gets to loot it and gather treasure that is randomly generated for them. It’s not necessarily itemised for you, however, so for the good of the rest of the team you will find yourself giving over items to other characters who can better use them.

Another example of encouraging team work is where, in one quest, a character can gather relics that can be reforged into an elite weapon. When completed, every player gets to choose a weapon – regardless of the fact that only one of the characters actually finished the quest.

Each character also has a special treasure finding ability. The Ranger discovers hidden caches, the elf can spot magically hidden areas, and the Dwarf can spot gold nodes and fragile sections of wall [you would expect beer barrels, too, but you can’t have everything – Ed.] The Elf can also harvest herbs that she uses to craft potions. Other than the basic health and mana pots, she can also make ones like increased strength and power, which are more directed to other members of the team – emphasising co-operative play once again.

All of this adds up to a well thought out collaborative online game, where teamwork and combined tactics are encouraged and rewarded. It is refreshing to see the amount thought that has gone into this aspect rather than multiplayer just being a tack-on.

The storyline and adventure is linear. Don’t expect to go wandering around an open-world map; instead, you will be sent in a specific direction, opening up new adventure hubs as you progress through the game.

These hubs (towns, camps, etc) are where you can buy and sell items, and get additional quests. The only departure from this is the optional challenge nodes, where you can opt to complete a special mission that will see you and your team squaring off against waves of enemies for experience points and loot.

Like the console version, the graphics are good. There is not much difference between each platform really. Regardless, they are pleasing to the eye, with each of the adventure areas helping to tell the this untold story of the ring.

Terrain varies from rocky and snowy mountain trails to ruined fortresses and – our favourite – the dungeons and tunnels of the barrow downs. For all intents and purposes, the PC version is the same game as that found on the consoles. The only significant difference is the shorter load times and mouse control.

Boss fights can be tough until you work out each of their abilities. Initial encounters are straight damage challenges, while later ones are phased and require more thinking in how you approach the fight,

The audio is great. Oftentimes it feels like you’re a part of the movies – albeit a part of the story that did not get past the initial editing.

It’s not all beer barrels and orc blood though (the game is pretty heavy on the gore), as the save game mechanics are a bit peculiar. The game saves only at specific points, and – if you happen to hook up with a game that includes players further ahead in solo play – you cannot even save progress made in that multiplayer session. This is a particular pain if you crash out of a game (or get disconnected), only find once you get back in that you are back to level 1.

This game is not going to break new ground in innovation but what it does do is deliver a good solid game that has well thought out online play, a good three player co-op mode and a solid single player experience. If you have any interest in Lord of the Rings then this is a game you will not regret purchasing. Who wouldn’t jump at the chance of helping out the fellowship?