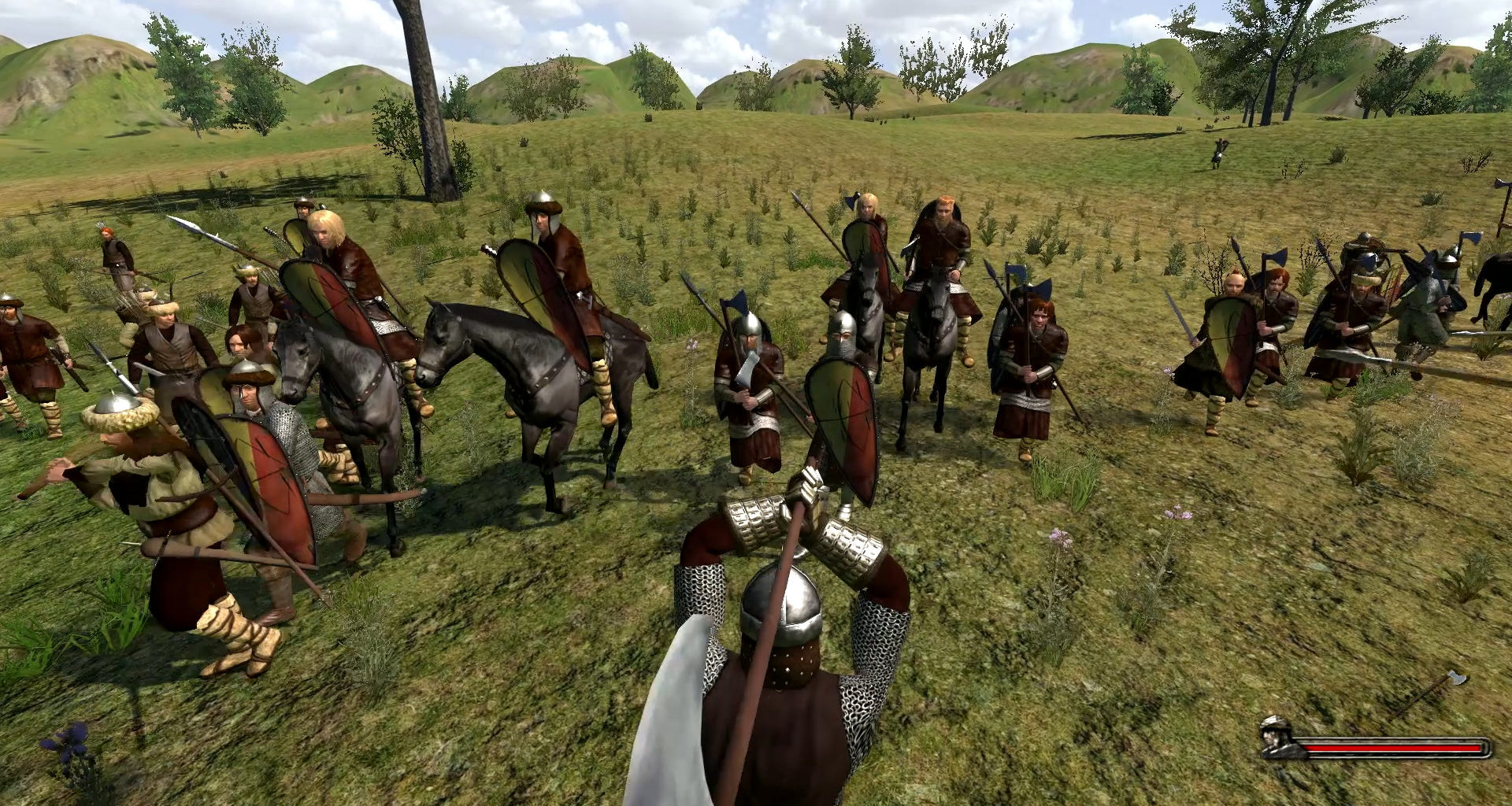 I was attracted to Mount&Blade; from the first time I saw it. It’s an underdog of a game (though some will – unfairly, I feel – truncate that to just ‘a dog of a game’). Coming from a small development team – TaleWorlds, based in Turkey – this Medieval Role-Playing Game was never going to have the polish of a big-budget mainstream title. But, for an independent release, it actually looks good. We’ve been spoiled somewhat by lookers like Oblivion and Fable 2 – Mount&Blade; is a bit grittier, and a bit rougher around the edges, but it’s also a bit of a diamond in the rough.

The game proper – though I would highly recommend going through the tutorials first (not something I always take advantage of in a game) – opens with a few screens of questions about your character’s past. There is some nice, if rudimentary, storytelling here – but really this is just a handy way of quickly generating your character’s stats, et cetera (it is, in fact, very reminiscent of older Elder Scrolls games). Then you get to lay the final touches yourself, as well as picking yourself a face (the game offers a pretty impressive set of variables here), before you are thrown out into the land of Calradia, with some basic supplies, a little bit of cash, and a horse (I’ll get back to the horse in a minute).

Calradia is a fictional region, home to several kingdoms, some of which are usually at war with some others. Though it isn’t a real location, it is far from being a fantasy setting. Mount&Blade; takes itself reasonably seriously as a simulation of medieval life. Accordingly, the realms of Calradia are styled after medieval Europe (or, in one case, after those eastern invaders, the Mongols). A pretty good job has been made of the setting in that it feels realistic. However, it does lack the colour that many RPG settings have – no-one is expecting the wow of a fantasy RPG, but a little more depth and differentiation would go a long way.

But back to the horse… As its title suggests, Mount&Blade; allows you to ride into battle. This is one of the game’s strengths: I don’t think any game has done riding (and especially mounted combat) as well as this before. That is not to say that it is perfect. There are still plenty of flaws. But generally speaking, it works well, and it feels good. Movement on horseback is controlled differently from on foot (more like driving a car), and it takes a bit of getting used to. But there is a lot of satisfaction to be gained from simple activities like jumping a fence – the jump feels, not only impressive, but right.

Fighting on horseback is even tougher to grasp. I still can’t joust to save myself – and often ditch my faithful steed before entering a melee. Horse-archery is also very challenging (unless you’re doing it in a stop-start sort of fashion. But these skills improve over time (so be prepared to sink some into the game if you want to get the most out of it).

If mounted combat is frustrating sometimes, it is probably at least in part because the basic combat interface is so intuitive and effective. Mount&Blade; uses the left mouse button for attacks (hold down for more power) and the right mouse button for blocking. Blocking with a shield is simple, but even if you don’t have a shield (once, for instance, someone splits it with an axe) you can parry with most weapons – however, you will have to hold the right mouse button in the correct direction depending on the attack type (thrust, overhead, or sideways swing). It’s a simple system, and it works very very well. Of course, much is still up to your character’s stats, but hand-to-hand combat feels both controlled and frenetic – could you ask for more?

If only the AI (enemy and ally) pathfinding was that good too! Fighting for the most part proceeds as it should. But far too often warriors (particularly those on horseback) will get stuck on terrain they haven’t had the foresight to navigate around. In arena battles, it is far from uncommon to see men walking into the walls for a thirty seconds before they think of something more productive to do.

In contrast with RPGs like Fable or Oblivion, Mount&Blade doesn’t always remain in the same up-close third-person mode. In fact, the bulk of the game is navigated on a map view reminiscent of strategy games, and, in particular, the Total War series. This view centres on your party (in the beginning it’s just you, but you can end up with a small army), and allows you to see terrain and buildings in every direction (though limited by your ability to zoom out – you are denied the seeing the whole map, which I guess you can interpret either as a frustration or a challenge), and various other parties (armies, caravans, bandits, etc) within a closer range, the extent of which is determined by your skills. You move around by pointing and clicking, which is simple enough (although again, the pathfinding leaves something to be desired). You will spend a wee bit of time waiting for your avatar to get to faraway places, but this isn’t a great frustration – not compared to the necessity of dodging all manner of roving nogoodniks which, until you’ve assembled a decent force, you are ill-equiped to take on.
Although when you enter towns you are given the option of wandering the streets, you can shortcut this by using a text interface to go straight to the people, shops, or other locations you’re interested in. So, for the most part, you’re only going close up when you go into battle. There, in addition to handling your own weapon, you can also give orders to your men (assuming you have recruited some) to attack, hold, etc. It isn’t very sophisticated, but it’s probably all you’d really want in a game where strategy is a sideline rather than the main gameplay event.

As for how you make your way in the world… it’s really very much a sand-box style game. And that has its pros and its cons. On the plus side: the game is open-ended, and you can roam around making your fortune however you please. There is much satisfaction to be gained from life as a trader, buying low, selling high, and every so often dropping your cargo to escape from highwaymen, et cetera. Or perhaps you’d prefer to build up a fighting force and clean up the countryside. There’s a fair number of denars (the local currency) to be made robbing the robbers. You can even get involved in the wars between countries – throwing your lot in with one kingdom to drive back the armies of another.

If you like free play, this is a great game for it. It can be very difficult to get ahead, but the game is also very forgiving (I have been defeated and captured countless times, but I always manage to escape and get back on my feet). And your patience and perseverence will be rewarded. Fight well for your King and you can be rewarded with titles, land – even a castle. Changing from bandit, to trader, to mercenary, to lord, also alters the gameplay. Once you have a village, you can make improvements to it, and you can collect your own taxes (much more rewarding than collecting on behalf of some other lazy lordling).

But there is a definite lack of core story. Even though the dialogue is well written, conversations, quests and, really, everything in Mount&Blade gets kind of repetitive after a while. While it is wonderful that you aren’t constrained to the rails of any master plot, you are also given very little direction. Maybe you’re happy like that – for my part, I’m finding this to be far too addictive. But I think many will find this lack of story daunting, or even just dull.

The same could not be said about the soundtrack, which stands up well amongst today’s RPGs (and, in places, I found it curiously reminiscent of TV’s Firefly – appropriate for roaming through no-man’s-land). In terms of sound effects, too, Mount&Blade punches above its weight.

In the end, tt’s a matter of knowing what you want from a game. If you want a story-driven, graphically intensive roleplaying game, this is not going to do it for you. But if you enjoyed the freedom of Sid Meier’s Pirates!, Mount&Blade is probably right up your alley. In fact, it actually feels much like the child of Pirates! and Daggerfall – both incredible and problematic because of its unrestrictive gameplay. It’s a flawed gem, but if you’re willing to forgive its foibles, its one hell of a ride.