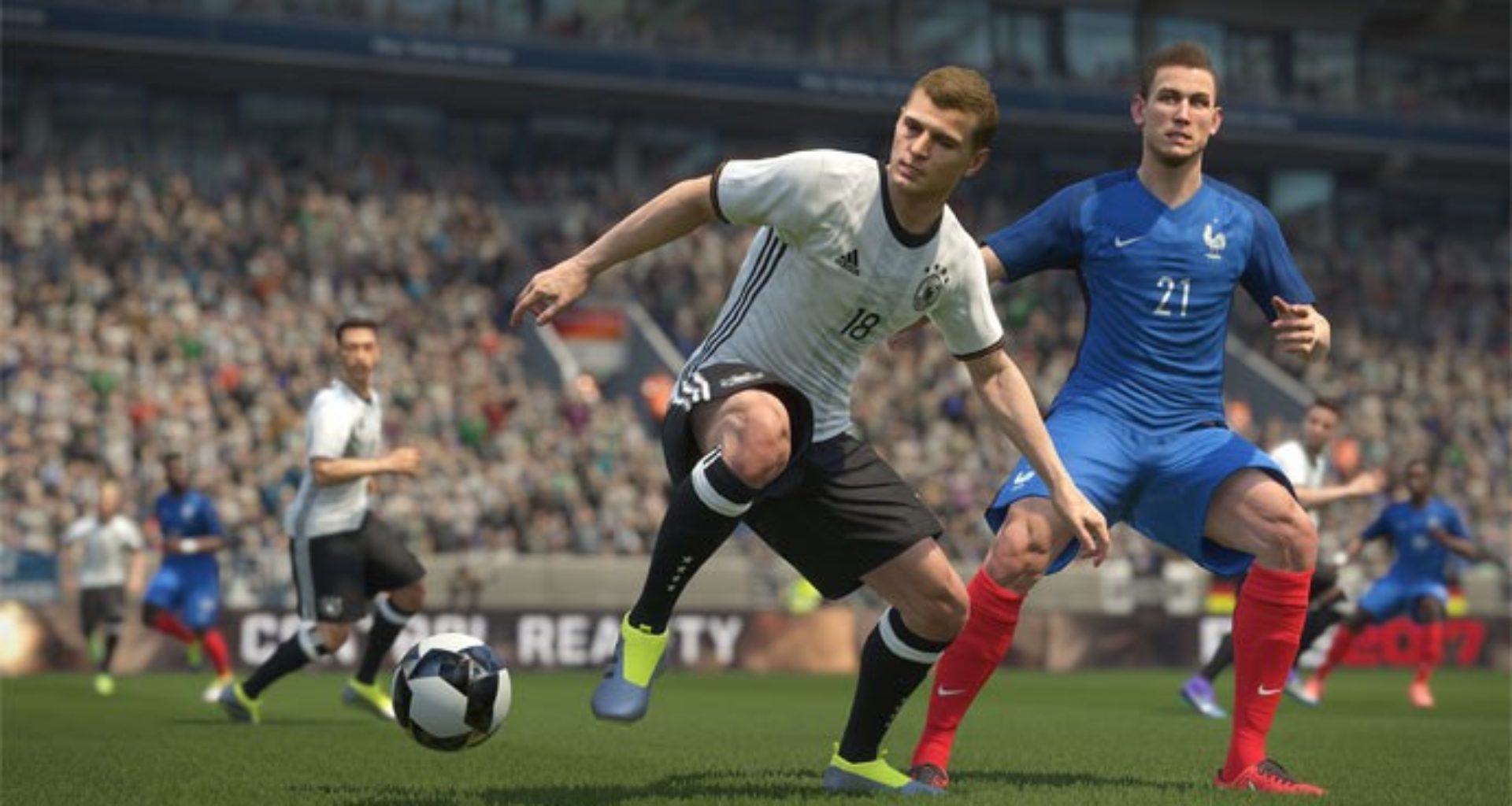 It’s that time of year again, when the two biggest franchises, in the world’s biggest sport, face off for the ultimate prize. The title of Best Football Sim. So, after decades of kicking gamely at the shins of FIFA, is 2017 the year Konami delivers a better football sim than EASports?

If you were judging purely on core gameplay it may just be the year to hand the trophy to PES. Although it may not be everything in a game, in a AAA sports title it matters a lot. With simplicity, responsiveness, and a solid AI, on the field at least Pro Evolution Soccer delivers.

But these days core gameplay isn’t everything. Not even in a sports sim.

While last year’s revamped PES included major upgrades, in 2017 the focus is on consolidation. It’s a year of tweaks rather than significant change. There are new generic animations that add passing, on-ball tricks, and celebrations to all the players. Along with star players like Messi and Neymar having their own signature moves. Improved goalie AI, ball control, and passing are also included, and though they’re undeniable improvements, they’re only noticeable if you’ve sunk significant hours into past versions of the game.

A welcome addition is the extra level of strategy that has been added to corner kicks. Both attacking and defending sides can now, with a couple taps of the d-pad, select plays. For example, defenders can quickly switch from a defensive zone to close man-marking. While attackers can drift out of the six-yard box before breaking for the near post. It’s a fun feature that, while not having a large selection of plays, adds a lot to the typical corner kick strategy of ‘hit and hope’.

All the new additions come together to make playing football the undoubted highlight of the game. You’ll be subtly faking out defenders, playing through-balls, and landing on your head when challenging for the ball in the air. Add to this a wide range of tactics that you can change on the fly, from dropping everyone back to protect a late lead to applying constant pressure or focussing entirely on a Braca-like short passing game.

Which brings us to licences. Barcelona is top of the bill, along with Messi, Neymar, and Luis Suarez (do we like Luis Suarez now? I guess so).Then there is Liverpool, the Champion’s League, and that’s about that. Did I mention the core gameplay is the most important thing in a sports sim? That’s a good thing for Konami because if licences were the most important thing, PES would be screwed.

The menu is dense and cluttered with game options from quick games to the managerial Master League, myClub, and Become a Legend modes. All can be played on and offline along with cups, leagues, pvp and multiplayer competitions.

Sometimes, especially when you get an early copy of a game, playing online can be problematic. There may be server issues that are still being worked on, or matchmaking can be slow because there simply aren’t the people playing online. Or it could just be New Zealand’s internet sucks. All this considered, playing PES 2017 online, over the last week, has been a mess. While it wasn’t dumping me out of the game like PES 2016 did, matchmaking takes an age, and when you do get to play the lag can sometimes be impossible.

Online play isn’t the only problem. Although they are not unique to PES 2017, some design choices are simply frustrating. Usually the created player career mode is my main go-to when it comes to any sports sim. PES 2017 is the first game to make me abandon the career mode inside the first season. Not being able to quit out of a game when you’re subbed off, or skip to the point in the game where you’re subbed on, gets very old quick. Sure, you can speed up the game a little. Until there is a replay and it all slows down again. And, when you do get to play your energy depletes so quickly that you’re useless in the second half of the game and you can feel your manager’s trust – the thing that’ll help you get more game-time – drop through the floor.

But, the management modes are also frustrating. When you first build your team you get enough ingame currency to snag a few top players. But the coins are soon gone and the opportunities to earn more cash quickly drys up as you have to start spending it on renewing player contracts. Even when you earn enough coins to hire scouts to improve your chances of getting the rare 70+ left back you need, you always end up randomly getting a hopeless center back that you have to throw back to the market.

So, it is a very good thing that core gameplay is the most important feature of a sports sim, because, playing football in Pro Evolution Soccer 2017 has never been better. The argument could be made that playing football has never been better in all gaming. While there are plenty of issues, if you’re willing to work around, or ignore them, there’s an awesome, accessible, and complex game that won’t match FIFA in everything, but may just beat it in the thing that matters most.