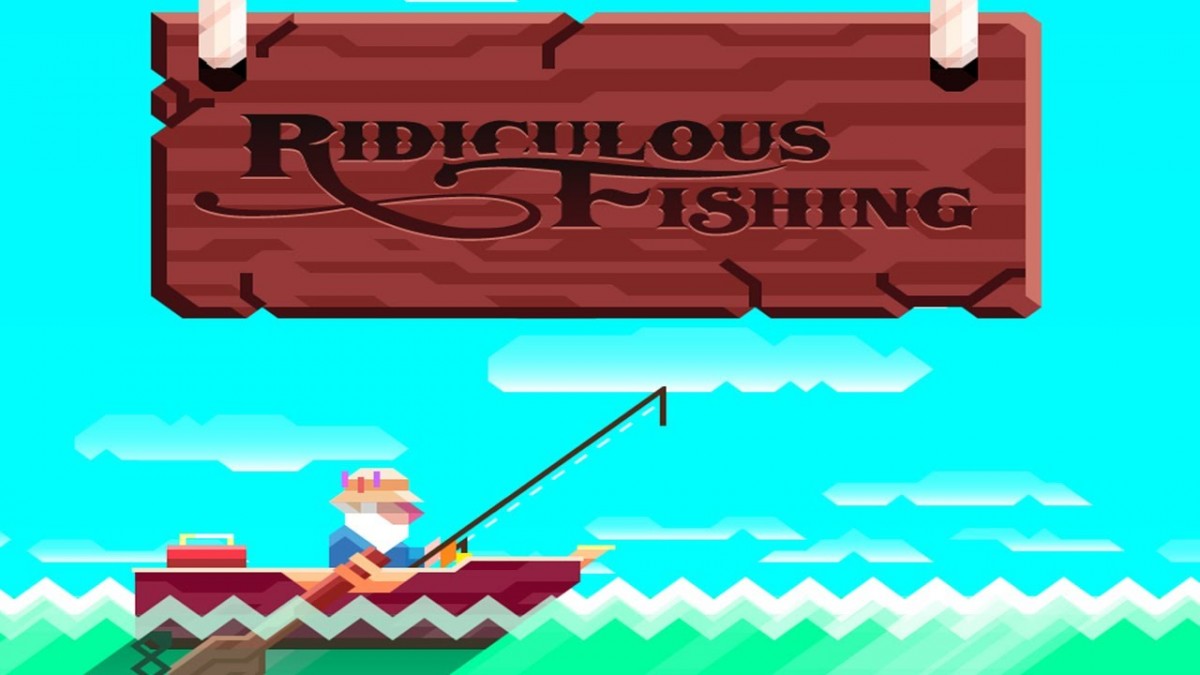 Ridiculous Fishing might seem like just another iOS game, but it’s actually a whole lot more. Every aspect of the game, from the rewarding upgrade system to the unique graphics, displays an intricate craftsmanship we rarely see on the App Store. This game is something special.

In concept, the Ridiculous Fishing is as simple as they come. A fisherman casts his line, and you control the lure as it travels into the dark depths of the sea. Your job is go as deep as you can by tilting to avoid the myriad fish living down there. When the lure touches a fish, the fisherman starts to reel it in. Now your job is reversed, and you have to catch as many fish as possible as the lure rises to the surface.

Once the fisherman yanks the bundle of fish out of the water, they go flying into the air. Here the fisherman whips out a gun, and it’s up to you to tap or drag your finger across the screen to shoot as many flying fish as you can. The more fish you destroy, the more money you get. All of this is simple enough in concept, but it requires constant attention and quick reflexes in practice.

If that were all there was to the game, it would be a little fun time-waster. But what raises Ridiculous Fishing to a whole new level is its in-game store, where you can purchase upgrades to your line, lure, headwear, and arsenal of weapons. These are not one-time use power-ups like you’ll find in other iOS games. Nor are they items you can purchase using real-life money, either, so there’s no incentive for the developer to make them cost a fortune. The in-game store in Ridiculous Fishing is a thing of beauty.

Everything in the store affects your ability to send the lure deeper, catch more fish, or dispatch them easier. When you buy the chainsaw lure that lets you plow through fish as you drive the lure down into deeper water, your scores go up. When you equip the light that illuminates the dark depths of the sea, you reach go further depths. When you equip the shotgun, you’ll blast through a dozen flying fish with ease. And the better you become at the game, the quicker you earn money to keep upgrading your equipment.

Perhaps the best thing about the game is that all of the equipment is attainable. This isn’t one of those games you can keep playing until your brain turns to jelly. It’s a game that offers you a set of achievable goals, and lets you attain them. In other words, you can buy everything in the store, and beat the game.

But the store isn’t the only thing that’s perfectly executed here. As you play, you learn about the fish. You’ll quickly find that jellyfish are to be avoided because they cost you money. Some fish are harder to kill than others, and if they’re not valuable enough, you might avoid them until you unlock a more powerful gun. Each species of fish has its own properties, making them more or less valuable to you depending on your circumstances.

The same goes for the guns and lures you can equip. Some weapons fire single bullets and require you to tap the screen madly, while others are automatic and let you swipe around the screen. Using the chainsaw lure seems like a simple thing on the surface, but you have limited fuel, so you only want to use it when you’re about to touch a fish. It all adds up to hundreds of small decisions you have to make on the fly. It’s intense, man.

Ridiculous Fishing is so much more than just a simple iOS game. It’s meticulously designed to make every one of its many parts cohere. It’s easy to learn, hard to master, and it unfolds gradually, revealing more and more depth the further you progress. There’s something special about this game, and we can’t recommend it enough.