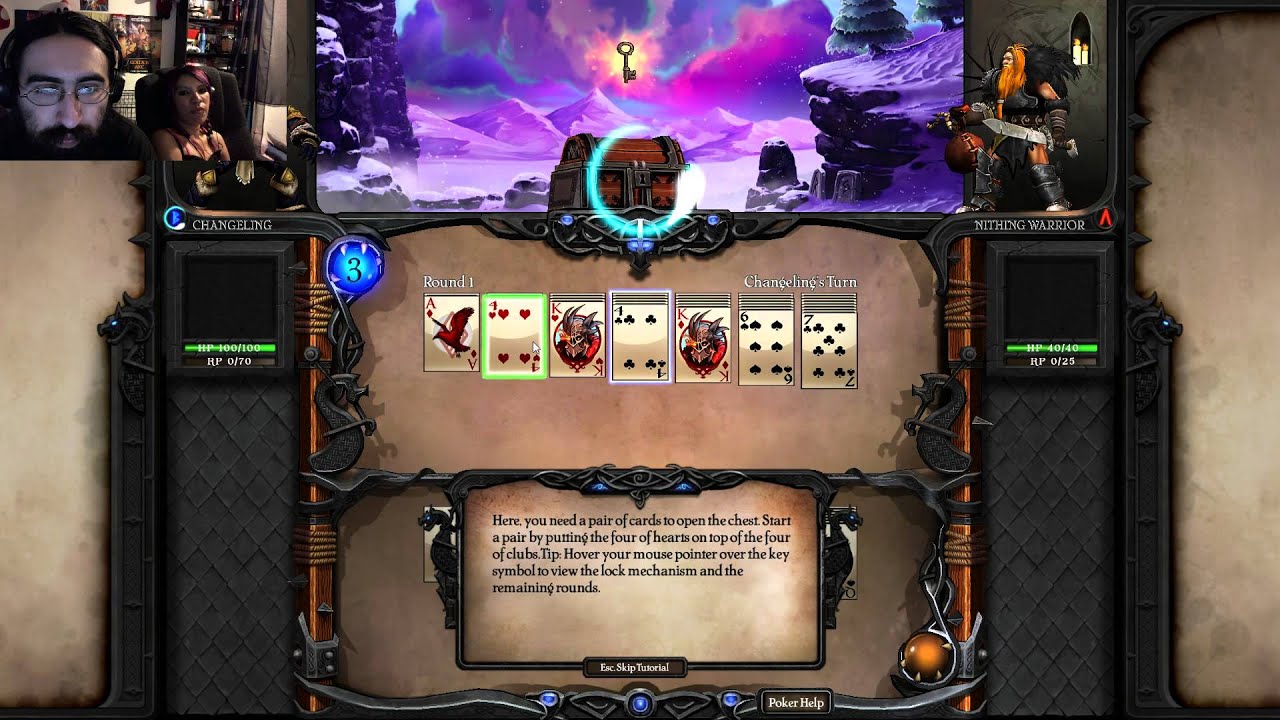 We were all arguing the merits of the latest console controllers and we were at the stage where bets were being made and the older team members were starting to reminisce about joysticks. Suddenly the Editor popped his head out of his office and said “who’s up for a review of a game that mixes poker with role playing games”. Now this was as believable as his assertion that before his current job he was an international playboy [I was. Honest. – Ed.]. Despite our doubts, we hopped on Steam and downloaded Runespell: Overture, a new game from Mystic Box.

To our surprise he wasn’t kidding, it is genuinely a card game based on Poker with strong elements of RPG thrown in. Crazy as this combination sounds, we discovered they work quite well together.

The heart of the game is, as suggested, a game of poker. The classic card game where royal flushes, straights, and two pairs in the casino can mean large wodges of cash or an empty wallet. The main departure here is that, instead of the five cards normally dealt, you get seven stacks of cards displayed in an upper panel on screen, while your opponent has a similar set of stacks in the lower area. From the cards that are face-up, you have three moves in which to try and put together a scoring poker hand (this often takes more than one round). Depending on the value of the hand you create, a melee damage score is established. Using one of your moves you can inflict this damage on your opponent. The first person to lose all their hit points is the loser of the battle.

Simple enough you say? Well, to add a bit of spice, you can also spend your “move” to steal one of your opponents single face up cards (stacked cards are exempt) and place it into one of your stacks. So immediately there are some tactical decisions you have to make. Do you steal cards to make up your hands, or do you steal cards to lower the value of the opponent stacks?

So where is the RPG element? Well to understand this you need to go to the background story. The game is set in medieval England, albeit one that is locked in an ice age. Without giving too much away of what turns out to be reasonably good story, you start out not knowing who you are and where your journey will take you. You have a map to follow that has various branches and side quests to undertake, and whenever encounters result in combat, you switch to the “poker” combat phase.

Where all this starts to make sense is in the Runespell cards that you can purchase from traders, or win in battle. In addition to the normal poker moves and card stealing, you can opt to use one of these magic cards. These can be passive ones that add to your hit points, while others grant you a magical attack such as lightning bolts or fireballs. Others can summon an ally who may have special attacks. There are defensive spells that can lessen damage from a specific school of magic, lock down some of the opponents spell cards or grant you additional moves in your turn.

To play one of these cards requires rage points and these are accumulated through doing damage in combat. Suddenly a simple poker card game has been turned into a very challenging tactical game that is both absorbing and fun to play. There are a lot of nuances to the game and opponents become tougher and more cunning as you progress. Add to this the luck aspect of the cards you are dealt, and each combat has differing challenges.

The graphics and animation are relatively basic, with some combat animations at the top of the main screen as the encounter plays out. There are also some cartoon story based sequences. What was disappointing was the design of the poker deck. While the spell cards were in a medieval RPG style the poker cards were quite plain and modern looking.

There is no doubt that this is a quirky game; however it hangs together well and delivers an entertaining gaming experience. We liked it, and now we are left wondering what our editor’s previous job really was……? [If I told you, I’d have to kill you. Up to you. I’m leaning towards telling you. – Ed.]