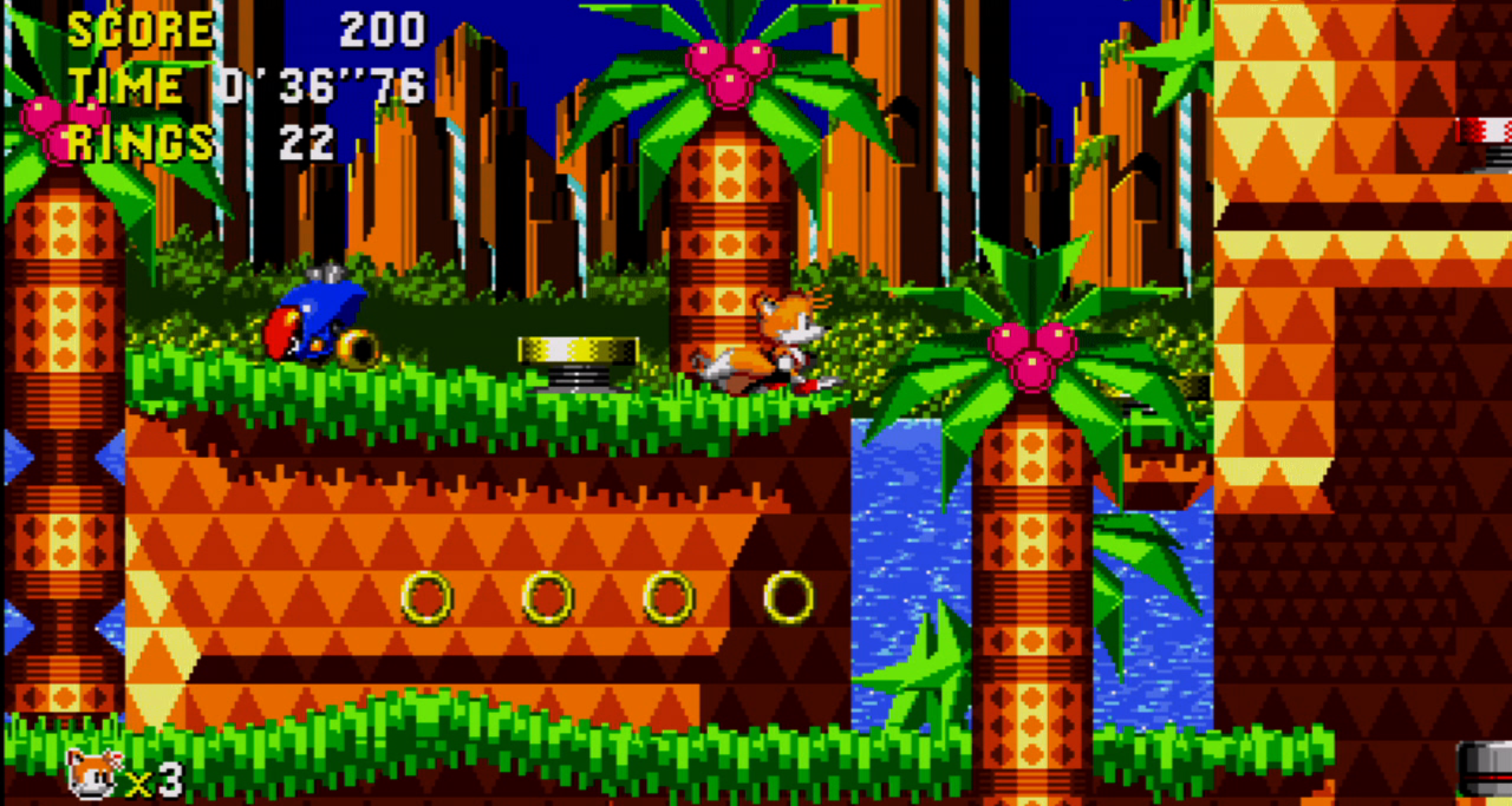 Some of the readers on this site will be too young to remember Sonic’s glory days. Imagine that. Only being familiar with 3D Sonic games and not playing the occasionally brilliant handheld games. Misty eyed gamers, or those that plain missed out now have the opportunity to play as the pointy one when he was in his prime. Thanks to the witchcraft that is XBOX Live, Sonic, 1, 2, 3, and now Sonic & Knuckles are available as separate downloads.

For those unfamiliar with Sonic & Knuckles, it is a standalone Sonic game where players can opt to play as either Sonic or Knuckles (really?). As well as character differences such as Sonic jumping higher and Knuckles being able to climb walls, both characters take a slightly different path throughout the game. Although most of the zones are the same, each character does have some completely unique areas, as well as different bosses to fight. This adds a lot of re-playability to the title, and there is a lot for completionists to tinker away at.

The actual Sonic & Knuckles game itself looks and sounds a lot like Sonic 3, which is a very good thing as it remains one of the best looking and sounding games of the era. The gameplay is your standard Sonic affair: lots of speed, exploration and loops. Personally I did find a couple of the levels slightly repetitive and despite the speed, there are a few gameplay elements that slow the game down more than they should. The hanging see-saw things and weeds that latch onto your character are two of the main suspects. Levels included in the game were entertaining, but how the game enhanced existing Sonic games are what really made it special.

Famously though, the original cartridge would piggy-back onto other Sonic games, effectively expanding your existing Sonic library. This was mostly functional with Sonic 3, letting you get to new areas of the game and changing how the game ended so you would go straight onto the Sonic and Knuckles levels after ‘defeating’ Dr Robotnik. Many count Sonic 3 & Knuckles as what Sonic 3 should have been and as the high point of the speedy ones career. Jamming the cart into Sonic 2 let you play as Knuckles in that game but didn’t add too much else and morphing the cart with Sonic 1 (or almost any other Mega Drive title…) let you play a ‘Blue Sphere’ mini game. Of course if you have already downloaded the other Sonic games on XBLA, you get access to these extras by downloading Sonic & Knuckles.

Those that have the other Sonic games on XBLA, will have noticed they haven’t been messed with. Everything is faithful to the Mega Drive originals. This is a very good thing as many games that try and implement new features or upgrade graphics end up altering what made the games so good to begin with. I was also of course worried about using the XBOX controller for a fast 2D platforming game, but I didn’t hit upon any problems at all. I forgot I was actually using the 360 almost instantly.

As good as the game is, there are some very good reasons you wouldn’t download it. Sonic fans that don’t have the originals can already purchase for a reasonable price the and pick up the whole series, and some very tasty extras. If you just want a nostalgia trip or one Sonic game to wet your appetite, 1, 2, or 3 would be a better download. You would only download this really if you had already downloaded the other Sonic games. That and it would have been better if 2 and 3 were just released with the Sonic & Knuckles content instead of charging for a brand new download.