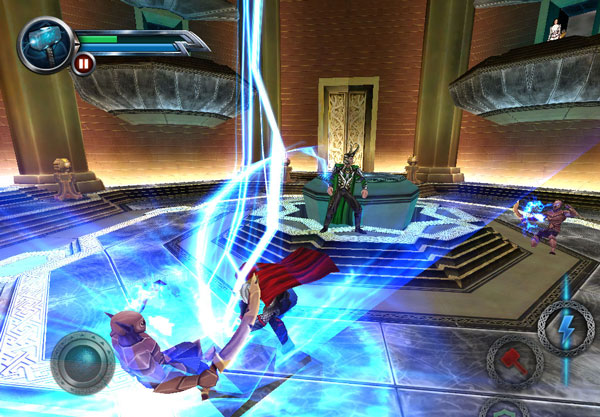 While Thor pumps his Nordic deity-grade testosterone into the multiplex, you can get a jolt of it on your iOS device just by buying Thor: Son of Asgard from the App Store. This game is a universal app that delivers plenty of gorgeous graphics and beat-’em-up gameplay, but little in the way of variety.

The game’s storyline is different from the movie’s, so there’s no need to worry about spoilers. In the game you play as Thor as he sets off on a quest to find out why his sister, Sif, has apparently betrayed her kingdom and shacked up with the bad guys. To get to the bottom of it, you’ll travel to a variety of crisp, colorful, Retina-optimized worlds and slay armies of trolls, spiders, dark elves, and frost giants.

If you’ve read the comics, it will be no surprise to you that Thor’s weapons of choice are a hammer and lightning bolts. The game controls fairly well, with a D-pad for movement, and buttons for melee attacks, ranged attacks, and blocking. You can pull off several combos, too, including a useful one that brings down bolts of lightning on all nearby enemies, stunning them so you can thwomp away at them one at a time. The controls aren’t perfect– combos won’t work every time you try them– but they get the job done.

As relatively smooth as the fighting is, it’s not deep enough to keep the game entertaining from start to finish, which is essentially what the developers are relying on it to do. Basically, the entire game consists of you walking down a walled-in path, stopping every few feet to fight a group of enemies. When baddies appear, impenetrable walls of fire pop up to block your escape. When you’ve slain all the bad guys, the walls disappear, allowing you to progress a short distance down the path– at which point the whole thing happens again.

We get it: Thor is a beat-’em-up game, so it makes sense that you’d spend most of your time fighting. However, it would be nice if they’d added a little variety, like platforming sections or environmental puzzles, as you’ll find in similar titles like Devil May Cry 4 Refrain and Hero of Sparta II. Also, with such a heavy focus on fighting, it’s surprising that they didn’t make the combat more visceral. Instead, you’ll often find yourself swinging away with your hammer, wondering whether or not you’re even damaging enemies, who often don’t react to the blows at all until they fall down dead.

Which isn’t to say the game is worthless. It’s gorgeous, with cinematic music and a good deal of competent voice acting. Also, as you play, you’ll find classic Thor comic book covers scattered around (similar to the collectible art in Spider-Man: Total Mayhem) that you can view and use as your iOS wallpaper if you’re so inclined.

But with so many other similar titles on the App Store that do what Thor does, only better, it’s hard to recommend the game to anyone but hard core comic readers or beat-’em-up fans. If Thor had come out three years ago, it would probably have been the cream of the crop. But in 2011, it’s just another runner up.