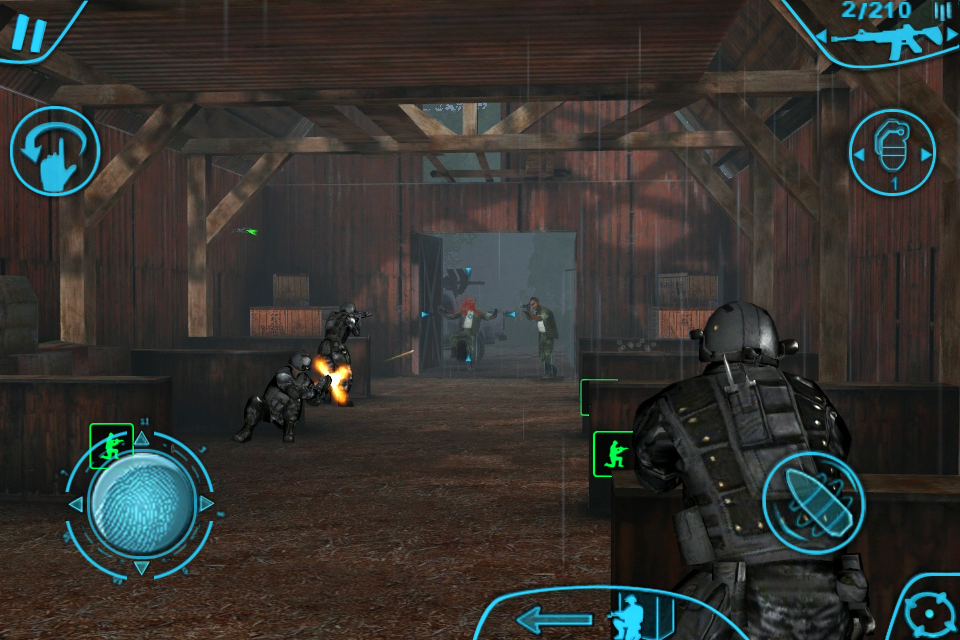 In Tom Clancy’s Rainbow Six: Shadow Vanguard, you play as the leader of an elite counter-terrorism task force. When terrorists do bad things, like take hostages or threaten to blow stuff up, it’s your job to stop them. You do that the most satisfying way possible: by infiltrating their location and putting bullets in their head, one by one.

The Rainbow Six videogame franchise goes back to 1998 and has appeared on just about every major platform since. This latest iteration plays more like a Gameloft first-person shooter than like other titles in the Rainbow Six series, but that’s not necessarily a bad thing. They’ve managed to graft on a few tactical strategy elements to give it a more thoughtful feel than those other games, but anyone who’s played N.O.V.A. 2 will feel at home here. The result is a formula that works, even if it feels familiar.

The game’s basic set-up is familiar, too. The content is separated into two multiplayer modes and a single-player campaign. Selecting the campaign sends you through 11 missions that usually boil down to killing bad guys and saving good guys. The environments are nicely varied, ranging from an African village and an offshore oil rig, to a South American drug lord’s Scarface-like estate (where, for instance, you can shoot explosive barrels of liquid cocaine). They’ve also done a good job of varying up the level-design between missions. Some missions send you through series of small enclosed spaces, while others have you taking cover in wide-open areas or climbing up and down floors in warehouses.

No matter where you are, you always have two A.I.-controlled teammates helping you out. When you come to a closed door, you can use a snake cam to see what enemies you’re going to face. Once you have this information, you can direct your teammates to toss in a flash bang or to light up the enemies in an order of your choosing.

This kind of strategic gameplay is what makes Shadow Vanguard stand out from the FPS crowd on the iPhone. Unfortunately, approaching closed doors is the only time you have useful control over your teammates. You can tell them to take cover just about anywhere, but it’s almost never necessary. It would be nice if you could direct them in more circumstances, like having them man turrets or bait enemies out into the open, or heal you when you’re close to death.

Another cool thing is that you get experience points in the campaign mode. So, just like in online deathmatches, you get points for each enemy you kill, plus extra credit for headshots. You also get experience for completing optional secondary objectives in each mission, and for keeping your teammates safe. These points are tallied at the end of each mission, and as they rack up you climb the ladder of command, unlocking new weapons and equipment as you progress. There’s also a treasure-trove of achievements, giving the campaign mode plenty of replayability for anyone interested in maxing out their stats.

As you can tell from the screenshots, the graphics look terrific. Everything shows up sharp, clear, and optimized for Retina displays. However, during some of the more graphically intense sections, like when it’s raining in the Congo, and when a large number of enemies are onscreen at once, the frame rate can drop dramatically. We noticed our control input lagging, affecting the overall experience. We were playing on a fourth generation iPod Touch, and still experienced the frame rate drops immediately after restarting the device.

But enough about the campaign mode. Multiplayer is just as robust, with both a co-op mode and a deathmatch mode included. In co-op, you can play locally or online with two other people in any mission you’ve reached in the campaign mode. This is a lot of fun to do, although our random online companions often left in the middle of a mission, which ends the game. Also, since there’s no voice chat or even text chat, don’t expect much in the way of tactical coordination.

More fun than online co-op is the online deathmatch mode, which contains five well-designed maps and allows for five-on-five teams. Here, too, you gain experience based on the number and types of kills you make, although the experience points you earn online are separate from the ones you earn in the campaign. But the idea is the same: as you level up, you unlock new weapons, larger ammo magazines, better scopes, and wider grenade blasts.

We have two issues we have with deathmatch mode. The first is that respawn locations don’t take enemy proximity into account, so you might end up staring down the barrel of the entire enemy team when you come back to life. The second is that most people who set up matches turn aim-assist off, which makes it all but impossible to move and aim and shoot all at the same time. Unless you want to hold your iPhone in an uncomfortable position, don’t plan to be able to circle-strafe your opponents. But everyone is at an equal disadvantage, so it’s not the end of the world.

Overall, we had loads of fun with Shadow Vanguard. Sure, it’s not all that different from the N.O.V.A.’s or the Modern Combats, and it would be nice to see Gameloft stretch themselves a little more in a future FPS. But no other company out there makes iPhone FPSes as big or exciting as Gameloft. If you want a tactical shooter in your pocket, you’ve come to the right place.