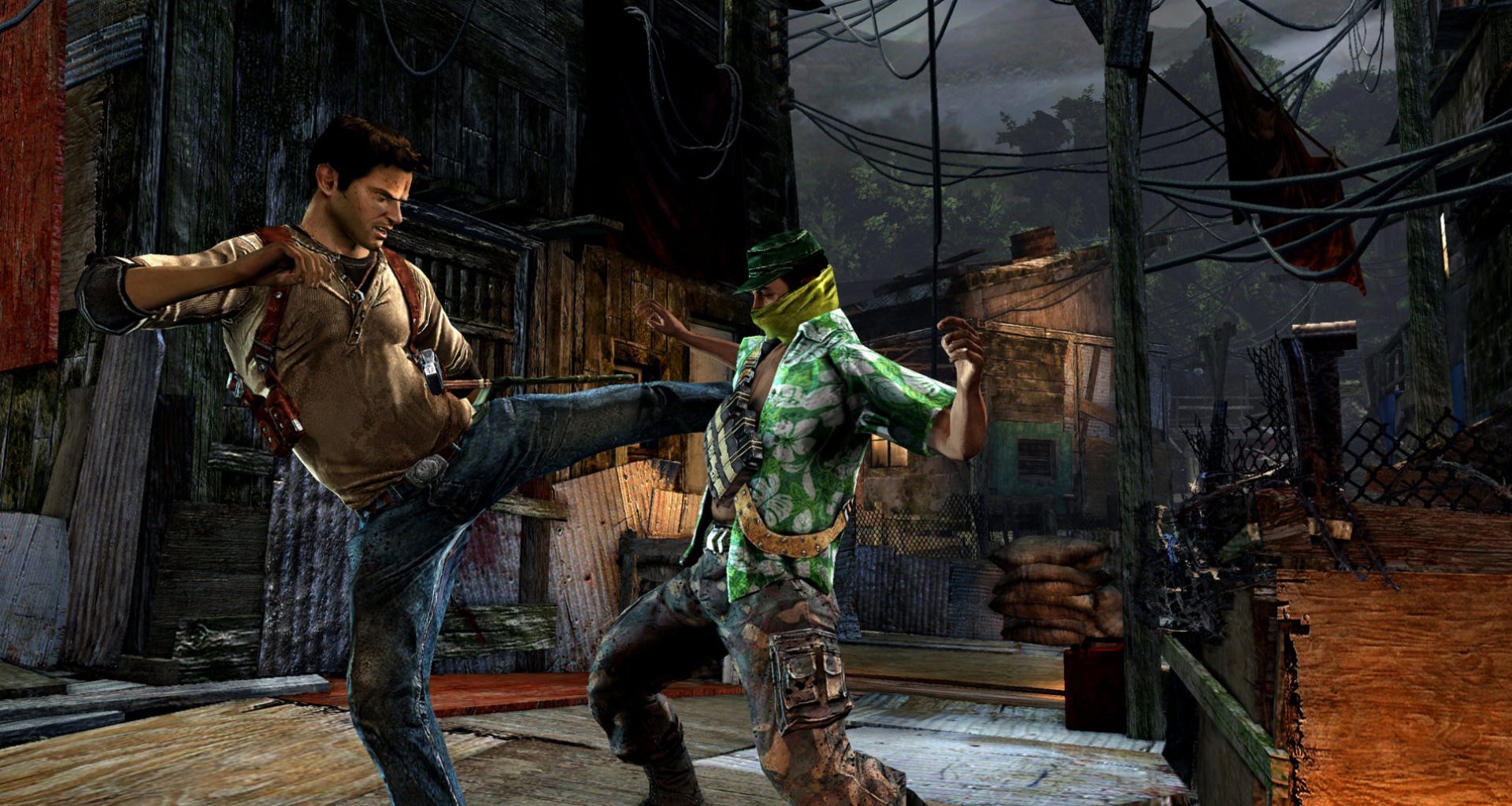 Games in the ‘Uncharted’ series are what you call Marquee Titles (with capitals!) It’s the kind of successful series that platform holders hope will make you buy their flash new system when it first comes out, just because there’s a new Nathan Drake adventure to play with.

The first three Uncharted titles have all been big hits on the PS3, utilising Sony’s most powerful platform to showcase the legendarily beautiful graphics. So it was with a keen interest that we sat down to see how Uncharted: Golden Abyss looks on the shiny new PS Vita.

Chronologically, the story of Uncharted: Golden Abyss slots in before Uncharted: Drake’s Fortune (so if anyone out there has been in a coma for the past few years and missed it, you can still play Drake’s Fortune after you finish this without having the story ruined for you. Also, we won the World Cup again, and Helen Clark is no longer the Prime Minister. Okay, good, you’re all up to speed.)

The PS Vita has a few cool new tricks, namely the ability to swipe the touch screen and tilt the system back and forward for certain controls. Golden Abyss explores the treasure hunting aspects of Drake’s latest story particularly well, and uses the Vita tech to great effect: you brush the screen gently to take charcoal rubbings from statues, hold documents up to the light to expose invisible ink (holding the Vita up to an actual light… awesome!), use the touch screen to brush dirt off objects you find, or use the controls on the back of the Vita to spin around objects around 360 degrees, to view from all sides.

You can also slash around with a machete and boost your partner up to reach a higher ledge, by using a swipe motion across the touch screen. And you can move the whole Vita itself around to aim your crosshairs at enemies rather than using the right stick, or tilt side-to-side to navigate your way down a raging river. The new tech is also optional in fighting sequences: slash across the screen to avoid enemy attacks, or tap on the fist icon on the enemy’s body to sneak up and grab him from behind – or punch him in the chops.

Throughout the game, you generally have a couple of options on how to do most of the things you’ll need to do. For example, if you want to punch an enemy you can either pound the buttons, or tap the screen when the fist appears, and can also swipe across the screen to avoid attacks. Sometimes this choice can be a little overwhelming, but you quickly find out which control options work best for you.

One of the key features of the PS Vita is its very fancy OLED screen, and it makes the South American jungle, Nate, and his pals look really really good. (Except for Dante’s pants. Which just look weird.) Visually it looks just as good as the previous Uncharted titles did on the PS3, with beautiful landscapes and backdrops, as well as rich set-dressing details. Whie the colours in the jungle really pop, there definitely isn’t as much variety of scenery in Golden Abyss as we’ve become used to in the previous titles, where Nate seems to circumnavigate most of the globe in the course of his adventures.

The sound does deserve a particular mention, especially the sound of the Dragon Sniper rifle. When you fire it you can hear the firing pin slam into the cartridge, as well as echoes of the shot reverberating back off the jungle around you. It’s stunning.

On the subject of the characters, there’s the same old witty banter, and same great Drake voice, but the characters lack a little bit of the sparkle. Nate himself is bang on… he feels exactly like the same character we’ve nursed out of burning building buildings, through the snow, dying of thirst in the desert, and dodging hideous un-earthly creatures from hell. But the other characters here…just aren’t as interesting.

It’d be hard to beat the ever inappropriate humour of Sully, the pluckiness of Elena, and effortless cool-girl appeal of Chloe. But more importantly, the real charm in those games is the way the characters all relate to each other, and how the scenarios push them together. Here, the characters of Dante and Chase just don’t really seem to fire Nate up in the same way, and well… frankly, not as much seems to happen, as the story pacing is a bit more sedate.

Unfortunately, Golden Abyss falls just short of earning its stripes as a fully-fledged, numbered Uncharted title in its own right. It’s almost good enough, but just doesn’t quite have the X-Factor of its big brothers. Whilst most of the use of the Vita tech comes off well (such as doing charcoal rubbings, or aiming by pointing the Vita at enemies) some just feel a bit forced… like having to swipe the screen three times every time you need to jimmy open a door (and you start seeing those doors coming from a mile off, knowing you’re going to have to swipe that screen three times.)

It’s a good effort, and still has lots of good points to enjoy throughout the game, but unfortunately will go down in history as the weakest of the series.