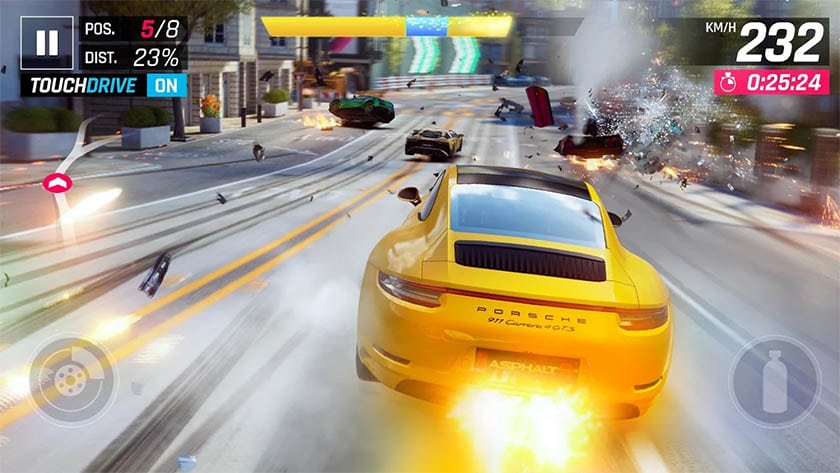 Arcade games are the most addictive games to play, the game play of arcade games is usually simple and the challenges are consistent, but the games become more difficult as the game progresses. Some of the popular Arcade games include Angry birds, Doodle jump etc., there are some amazing arcade games that haven’t received attention that they deserved, that is why we have curated this list.

Ghosts get inflicted by the light, but you have to hold tight! Keep them in your sight and make them fade in the night!

Once upon a time there was a princess, in a tall castle, who kissed as many toads she could in order to find her Prince Charming. But Toad just wants to be a toad, not live in a castle (regardless of how tall it is). So Toad did the only thing that could be done: ESCAPE!

Maze.io is a game in which you try to escape. a maze along with other online users. Who will be the first to escape it?

A bit of misplaced voodoo magic and a twist of fate causes a meatball come back to life! There is but one problem – everyone wants to eat him! Running for his life meatball has no time to dodge all obstacles in his way. You have to help him survive!

Brick Breaker Dungeon is a brick breaker pinball arcade game. To play it you should bounce balls from walls and destroy magic blocks that descend every turn. Different blocks have unique properties that can be used against them. Choose the right angle to fire pinballs, use the best spells and strike evil blocks to destroy them and get a reward!

Shooting balls is fun, challenge yourself in the magnetic balls bubble shooter.

Inspired by the classic Atari Breakout arcade but with a twist: 4 different types of power-ups make the progress much faster by rapidly increasing the number of balls you control.

Tap the screen to change the direction of falling box, and try to land them on other box, not the ground and you are good to go.

Welcome to our troupe of circus jumpers! Perform breathtaking stunts and get the adrenaline buzz. Choose one of the three heroes: a romantic clown, an ambitious and impressive circus manager, or a monkey, a carefree child of the wild. Improve your skills: balance on the verge of falling and overcome any difficulties on the way to your goal. Collect coins: get bonus features and achieve new records.

It is a defense game to protect the castle from enemy attack. The enemy’s attack will become stronger and stronger, but you will become much more powerful with upgrades to your defense.

5.84 Wing – Minimalist action-adventure game, with many levels for which you have to overcome a lot of obstacles to collect keys and open doors.

Mini free games is the application for android devices where you will be able to play between 7 totally different games and play without stopping. The application does not need internet connection or connection to a wifi network to play.

Chicken Boom is a bang – at least for the chickens. It’s raining hens and it is up to you to take up an arsenal of various weapons like rifles and shotguns to lower the poultry population down a few notches. You never did trust chickens, did you?

A shooting game for 2 players, also with option of 1 single player. You only have to shoot enemy soldiers and send your soldiers against the enemy. Also you have 9 levels for 1 player alone.

As the infamous bounty hunter Black Paradox, travel through space and defeat the most dangerous criminal organization in the galaxy: the Hellraisers and its seven lieutenants.

Perfect for the nostalgic who want to relive the experience of playing with this machines, perfect to enjoy with their children or to remember the old times. The game is simple but addictive, simply based on not dropping the balls to the ground.

An intense Shoot ‘Em Up designed for the fans of arcade shooter games. Start the year 2020 with Galaxy Shooter: Space Attack game. Evil enemies await you in this new take on classic arcade genre game, face tough bosses and their minions. Progress through increasingly challenging missions and upgrade your ships to unleash their full potential. Will you survive this bullet hell shooter?

Welcome on-board captain, the ship is now yours! Take control of her, drop mines and blast the enemy submarines to pieces.

Are you ready to face the true evil – the scary killer clown? Will you be able to solve all the puzzles that are waiting for you on the path to escape in these horror stories? You will have to play hide and seek with that monster and go through all the hard quests in order to survive throughout the night!

Attending a carnival you hop on the teacup ride which takes you to various sideshows which you attempt to score well on each.

Ski Penguin is an arcade game where you have to slide through the mountain to complete each level. The more distant you go more the difficulty increases and you have to be more careful.

The ancient bridge of Kazarma which connects the human colonies of the Galaxy, has been invaded by aliens. Traverse the bridge to drive away the invaders in this ‘easy to learn but hard to master’ challenging mission.

Tap the screen in time with the ball to swing the bat. Increase damage when hit at perfect timing! Damage increases as combos increase!

“Roll the ball and break some zombie bone!” Tilt your device to accelerate heavy stone ball and crush incoming zombies before they steal your lives!