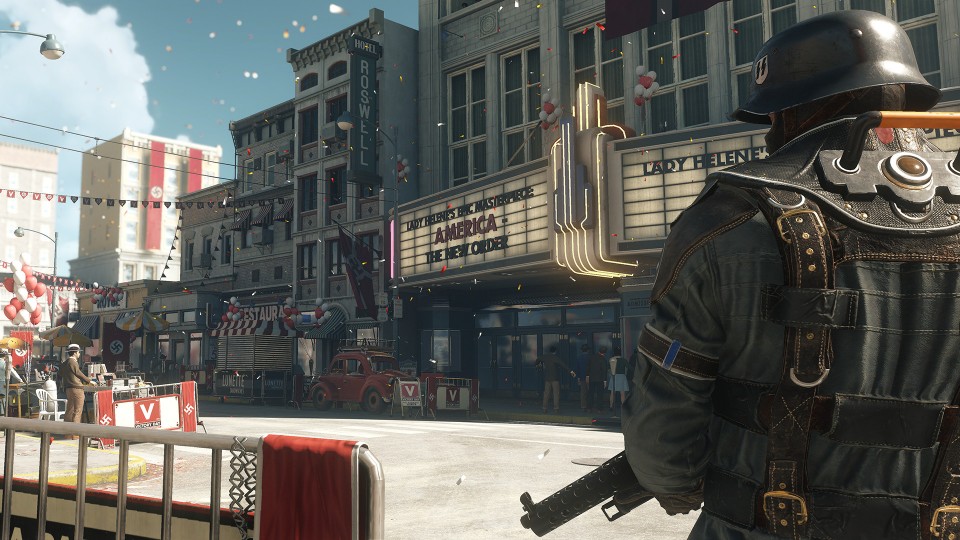 The Wolfenstein franchise has a long and bloody history or killing Nazis. The later games have also been rife with social commentary, moral dilemmas, and much more heartstring tugging than a game about killing Nazis should have. Wolfenstein II: The New Colossus is no exception.

The game follows five months after the New Order, after BJ “Terror Billy” Blazkowicz took down Deathshead. After watching a memory montage of the last few games, working through some of BJ’s childhood trauma, and re-traumatizing yourself by once again picking who lives and dies in the New Order, you’re ready to play. BJ however isn’t. He may have survived the end of the last game, but not by much.

BJ has been in a coma and is wheelchair bound for the first section of the New Colossus. It kind of explains why he’s so frail. BJ starts out with only 50 health, and while you can overcharge that, it will slowly wear off – even if you eat a whole banquet table full of food. Which is where armour comes in. Armour is your best friend and can be picked up nearly everywhere. Spare helmets, chest pieces, or even the scraps of defeated robotic enemies, it doesn’t matter; it all helps. Get used to it, because you will spend about half the game with reduced health and depending on armour.

Reduced health isn’t as big an issue as it may seem however, because Wolfenstein II encourages stealth. There’s isn’t a full fledged stealth system, but for a guy with a load of guns on his back, BJ can certainly sneak when he wants to. In each level there are Nazi officers which can call for backup. Instead of going in guns blazing, you’re encouraged to sneak around, learn the lay of the land, and stealth kill the officers before any alarms are set off.

Leaning is your best friend if you intend to stealth, as well at the hatchet that you can use either as a melee weapon, or heft at someone’s back. Silently of course. You can also upgrade your pistol and machine gun to operate silently. The latter doesn’t really make sense, but it’s useful. You can completely ignore the stealth approach of course, but be prepared for a hard game to become even harder. It’s still playable, but it will take a bit of running, accurate shooting, and result in a lot of quick deaths to larger enemies.

Either way, it’s still a very satisfying shooter. There aren’t too many guns to pick from, but those you have fill all the roles you need. There’s a pistol, SMG, assault rifle, a laser, as well as the heavy weaponry that you loot off enemy corpses. You can dual wield, with each gun having it’s own ammo, or just stick to one gun at a time.

Along with weapon upgrades, once you’ve progressed far enough through the story, BJ gains special abilities and perks. You have one of three to choose from. One gives you telescopic legs, meaning you can rain bullets from above, one which lets you run through walls and enemies, turning them into a fine mist, and another which lets you shrink down and scurry through vents like Ant-man. While you initially only get to pick one that suits your play style, you can gain access to others through side missions.

Perks are automatically added to BJ when you complete a task. While there are three main categories (stealth, mayhem, and tactical) you’ll only level up the perks that you use. The thrown hatchet perk increases when you – surprise – kill enemies with a thrown hatchet. The more you use a perk the better BJ becomes with it. With the hatchets for example, you can increase your carry supply, allowing you to throw a lot more of them.

Wolfenstein II is a narrative driven shooter with an in-depth world – one that I constantly got lost in. You can go through the whole game without ever wandering into the U-boat’s canteen (the ship that acts as your headquarters). You do miss out on a lot if you don’t explore – like a playable arcade cabinet with the original Wolfenstein game but from a Nazi perspective. You’ll also miss the array of side missions that range from teaching you how to use your new gadgets, to just adding flavour to your interactions with other characters.

These side missions come in two main types; those given out by NPCs, and those from the Enigma machine. NPCs will give you missions when you talk to them and include helping out around the U-boat and collecting items around the world. The Enigma machine missions are a little different.

Everytime you kill a commander they drop an Enigma code. You’ll have quite a few by the time you unlock the Enigma machine, so you can jump right into finding Uberkommandants to kill. In order to do so you need to decipher the Enigma codes by matching up the top and bottom halves of the symbols in each highlighted section. Once you’ve cracked a code you are free to select a location on the U-boat’s map and revisit an old area in order to take out the Uberkommandants.

The Enigma machine is however a key indicator of what I would call Wolfenstein’s major flaw: a seriously weird sense of pacing. By the time I had the Enigma machine I had already collected 22 codes, and had reduced one of the map areas to radioactive rubble. I could still play in the rubble, but surely anyone there would be dead by now.

You don’t get to pick from your new abilities until about halfway through, meaning that the first half of the game in played at 50 health as your standard. Not only that but almost none of your side missions will start until this point either. So while you may start off like a bat out of hell, once you hit that half way point you’re suddenly inundated with extra things to do and new gadgets to play with. It’s weird how quickly the game slows down. I’m not saying that the side quests are bad, but that they probably should have been introduced a lot earlier.

The best part about Wolfenstein II however, is a combination of the story and the cast. This game is truly BJ’s story. He’s coming up to 50, having spent most of his life fighting, and he wants nothing more than to stop – except he’s such a stand up guy that he can’t. He’s incredibly likeable, and incredibly easy to root for. It’s constantly touching. with a range of funny, quirky and believable characters just trying their best in a harsh world. Most of your bad guys seem to be a little bit over the top, and while well written, come across as caricatures. Then again, they are literal Nazis. 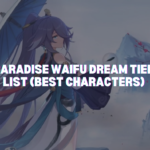 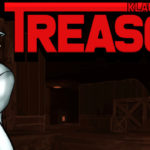