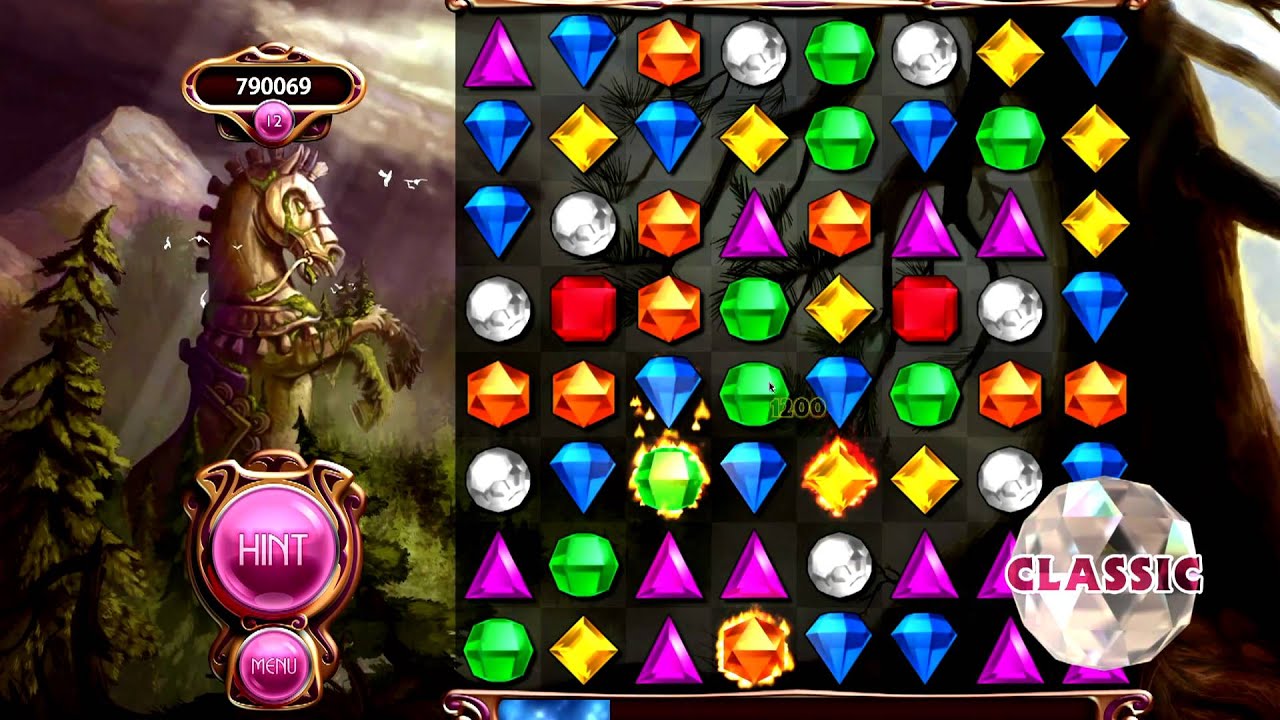 There’s something enormously satisfying about lining up and knocking things down in the name of entertainment: dominoes, tenpins, pedestrians… Well, maybe not the pedestrians [i beg to differ – Ed.], but you get the idea. Nearly a decade ago, PopCap must have realised they were onto a winner with Bejeweled. It wasn’t the first Match 3 game out there but the simple, addictive little puzzler soon found its way into the hearts and handhelds of casual gamers everywhere. We were treated to further enhancements in Bejeweled 2 and Bejeweled Twist, and most Facebook dabblers will be aware of the high octane blast that is Bejeweled Blitz. In December Santa brought us Bejeweled 3, so we were keen to see whether PopCap had managed to make a good thing even better.

For the benefit of those unfamiliar with the genre, the purpose of Match 3 games is to swap one tile (or gem, in this case) with an adjacent one to form a row of three identical gems, which removes them from the board. New gems drop in from the top as you play, and matches of four or more produce ‘power gems’, which can be used to destroy gems in bulk – often in spectacular fashion. Strategy plays an important role, however there’s also a fair amount of luck involved, since you don’t know what will be dropping in next. A seemingly humble three tile match can result in a screen clearing chain reaction (cascade) of epic proportions.

The game is comprised of four main modes, with four unlockable modes. While they all involve gem matching in some form or another, each is different enough that it could be a complete game in its own right. Some modes, such as Lightning and Quest, feature unique gem types.

The best thing about Classic mode is that it comes with no strings attached. There’s no time limit, no storyline to keep track of, and no increasingly difficult layouts; it’s just you and a grid full of gems. What you do get is an instant replay button to savour your most spectacular feats in glorious slow mo; and plenty of positive feedback providing further proof of your gem matching awesomeness. Having such praise heaped upon you is a surefire cure for even the crappiest day at the office.

Lightning mode is very similar to Bejeweled Blitz, where the object is to accumulate as many points as possible within a one minute time limit. You can buy extra precious seconds by matching certain tiles, but eventually you’ll crash and burn. The pace and pressure of this mode is enormous, and as the name implies, lightning quick reflexes are required.

Quest Mode incorporates a mixture of timed and un-timed mini games – each with a specific objective, such as clearing a minimum number of gems within a set number of moves, or clearing an equal number of red and blue gems without upsetting a delicately balanced pair of weights. Some of the mini games are easy, while some are challenging enough to require several attempts. Further stages in the quest are unlocked as you play, and you can replay the individual games once the quest is completed; however there’s no real incentive to do so.

Zen mode is one of our favourites. Essentially an updated, ‘New Age’ version of the Endless mode found in Bejeweled 2, it is excellent for chillaxing without the pressure of a time limit or the risk of running out of moves. We particularly liked the optional extras, such as the ambient sounds, and the mantras which appear onscreen as positive textual affirmations. The breath modulation option encourages you to synchronise your breathing with the audio and/or visual prompt. You may scoff at seeing the instructions to “breathe in… breathe out” (we did), but breath control is a known relaxation technique. The jury is out on the binaural beats, however, the use of which comes with a health warning. Apparently some people can experience muscle twitches, dizziness and hallucinations. For us, the feature was simply a headache-inducing background noise, which interfered with our concentration and enjoyment. Thankfully you can choose which of these options – if any – you wish to include in your Zen experience.

And if four very different themes weren’t enough for you, time spent playing each of the main modes unlocks four further modes: Butterflies, Poker, Diamond Mine, and Ice Storm. The latter two are timed and the former require some careful strategy to remain in play as long as possible. Variations of each feature as mini games in Quest mode. There are also badges to collect for specific achievements, such as clearing 10 levels in Classic mode, or nailing that elusive six-tile Supernova gem.

The high-definition graphics are a real treat, with clean lines and vivid hues in abundance. Layout is simple without being stark, and it’s easy to distinguish between the individual gems – even in Butterflies mode, where the gems have different shapes. Swaps and cascades flow smoothly, and SFX are lavish. A lot of time has been spent creating pleasing backgrounds, and there’s a neat psychedelic ‘wormhole’ effect between levels (shades of Doctor Who). Synth-tastic music loops seamlessly between a number of tracks, each with its own distinctive melodic and rhythmic theme. No doubt about it, in the audio-visual department, Bejeweled 3 is one slick production.

Is it worth investing in? We think so. There are plenty of similarities between the latest and previous incarnations, but PopCap have achieved their brief of introducing innovative ideas while maintaining the classic Bejeweled gameplay we know and love. It’s the kind of game you’ll go back to again and again, spending far longer than the quick five minutes you originally intended. Well recommended… and not just for the casual gamer. Bejeweled 3 is available as a download for around $25 and in some stores for around $30.