During the Crash Fever event period, 30 polygons will be issued to every player every day for free. The event period is from 2/2/2017-2/16-17 (two weeks) to be exact. There is a total of 7 new Vocaloid event quests: 1 Ultimate Wizard, 4 regular Wizard, and 2 Legend Quests. While the event is ongoing, there will be 3 SNS Quests, 5x Humpty Rate Quest, along with 17 new units. 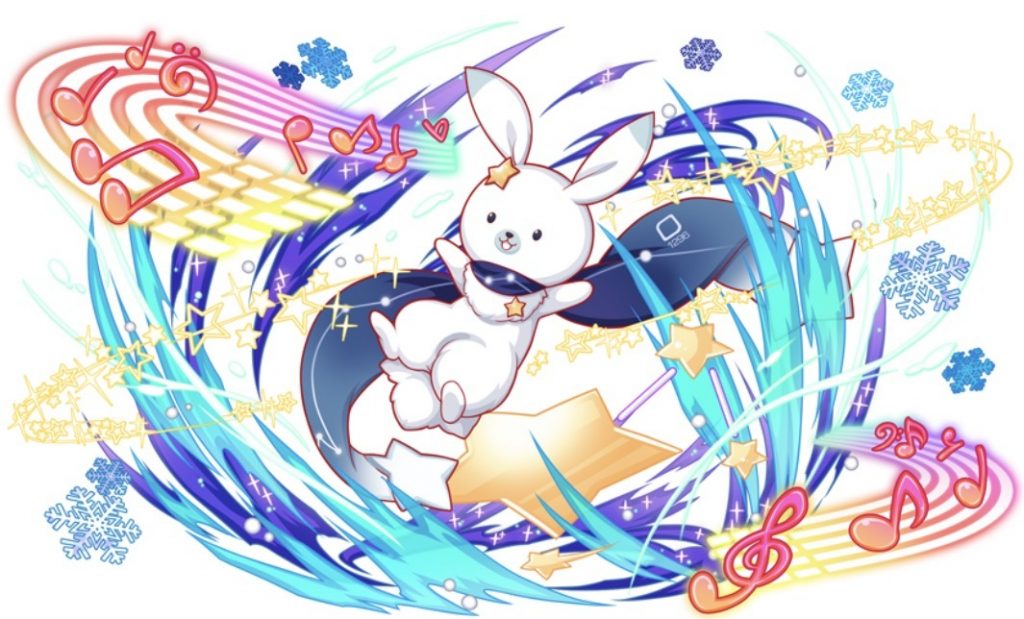 With the event launch, you get a cute rabbit named Yukino that’s already maxed.

Ability 2: Attack power up when chaining 12 or more panels.

Yukino is a free unit that is not very useful for higher level players, but for a new player, it’s a free 6* limited time unit that is only available during the duration of the collaboration. 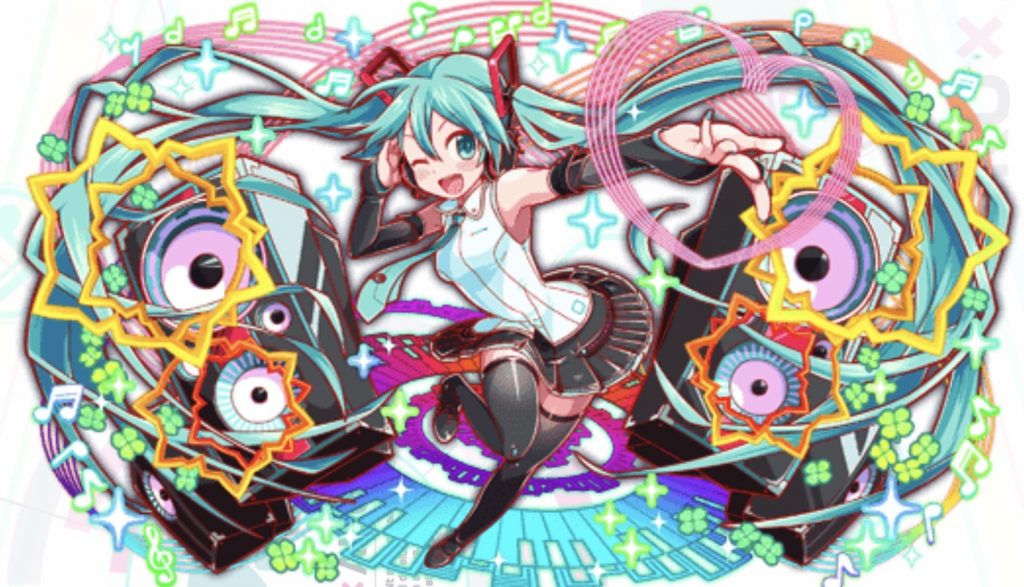 Skill: Spawns a magnet that pulls in Green>Yellow>Heart>Red panels for over 4 turns, along with an immense crash panel spawn for the party for 2 turns. Her skill cooldown is 8 turns.

Tip: All of the collaboration event quests may spawn junk panels, color disabling panels, and protected panels. You can bring Miku to any of the quests regardless of her color type since she still can provide a strong role. It is recommended to have two of her in the party for Lucifer-Miku. If possible out of all the units, aim for her. 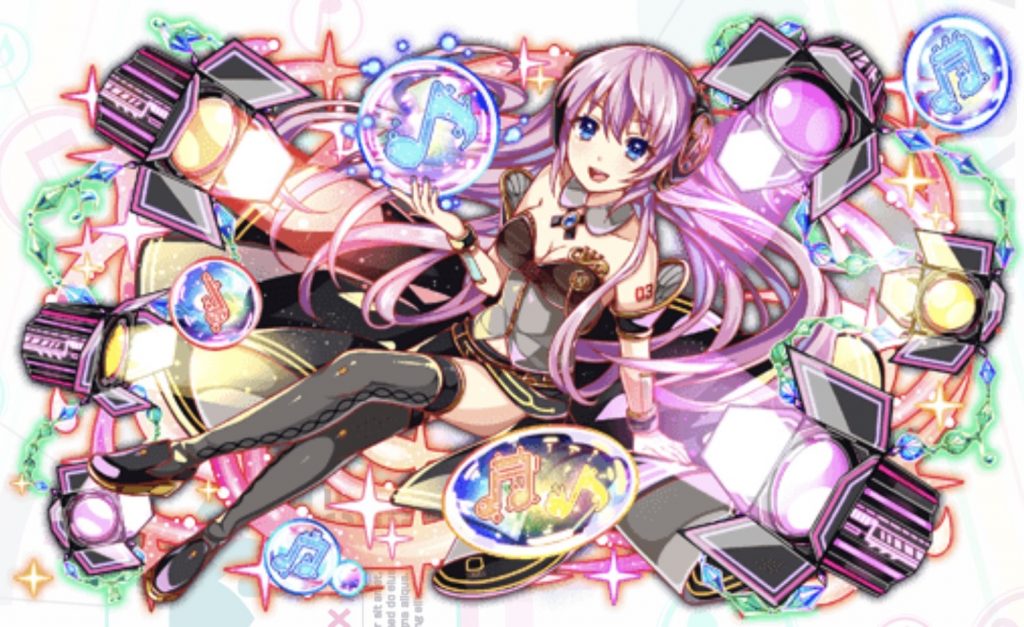 Skill: Luka converts junk panels and green panels into crash panels. She also has an ultra attack boost to all allies for 2 turns and spawns a magnet panel for 2 turns that pull only red and blue panels.

Crash skill: She inflicts massive damage to a single enemy.
Ability 1: She Reactivates red and blue panels that are disabled when she is in front.
Ability 2: Has the ability to destroy junk panels when she’s in front.

Tips: Luka is great for the current vocaloid Murasaki Quest since the quest is composed of mainly junk panel spawn and panel lock, which will utilize Luka’s full potential if present. Luka is a balanced unit with great offensive stats, she should be used after the bosses create junk panels to clean up and provide a large amount of screen clear and burst damage. Overall Luka and Miku would be the 2 top units to go for in this hatcher. 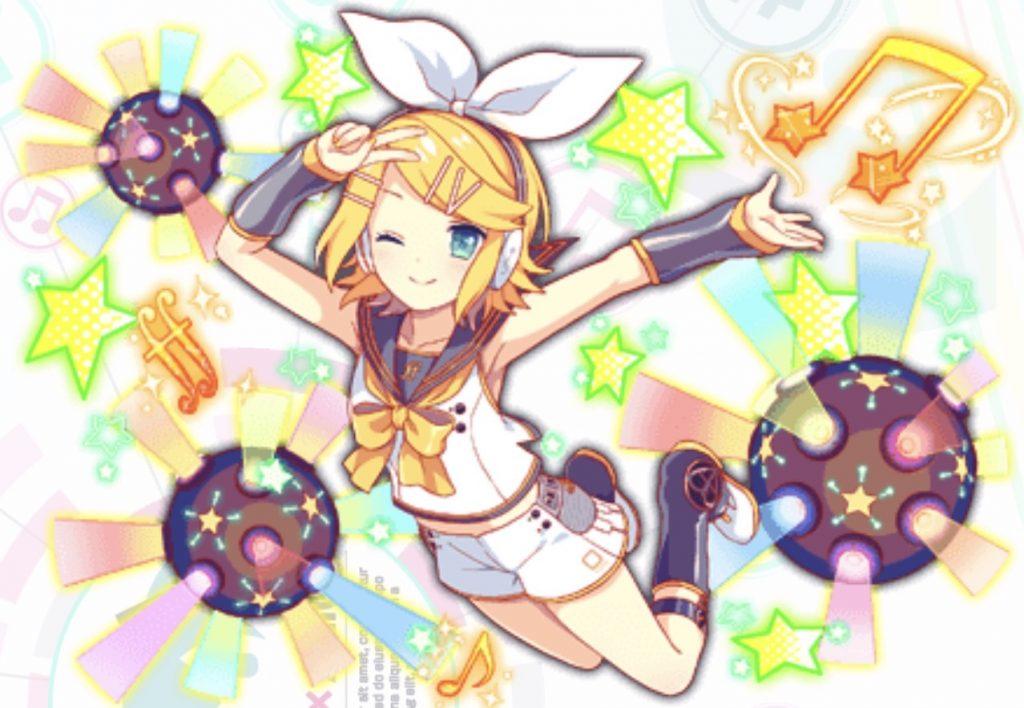 Tip: Rin is great for the Electroconcerto Hamelin Vocaloid quest because she provides great counters and a defense boost stack. In terms of use she’s mainly a defensive healer, but if you use her with the other Vocaloid unit Len’s skill at the same time, they pair well together and create a screen full of yellow and crash skill panels. Overall Rin can work both as a healer/defense buffer and provide the team with a good amount of support. 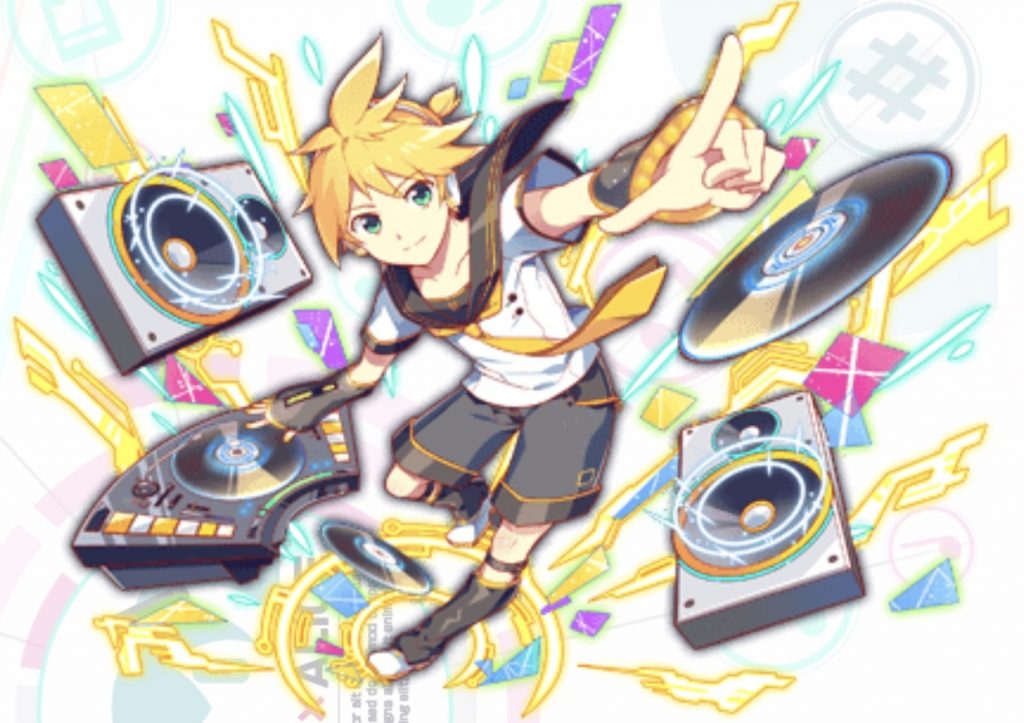 Skill: Len converts blue and heart panels to crash skill panels. This is along with an attack boost to yellow and unidentified units with a skill cooldown of 8 turns.

Tip: Like Rin, Len is also great for countering Hamelin’s quest. Although Len is more of an offensive attacker; Since he reactivates yellow and green panels, he can also fulfill a role of a support unit if needed. He can provide 1 turn of burst damage and a defensive shield for 2 turns. As stated for Rin earlier, if you use Len’s crash skill in combination with Rin’s, you can create a screen full of crash skill and yellow panels that can provide a great deal of burst damage. 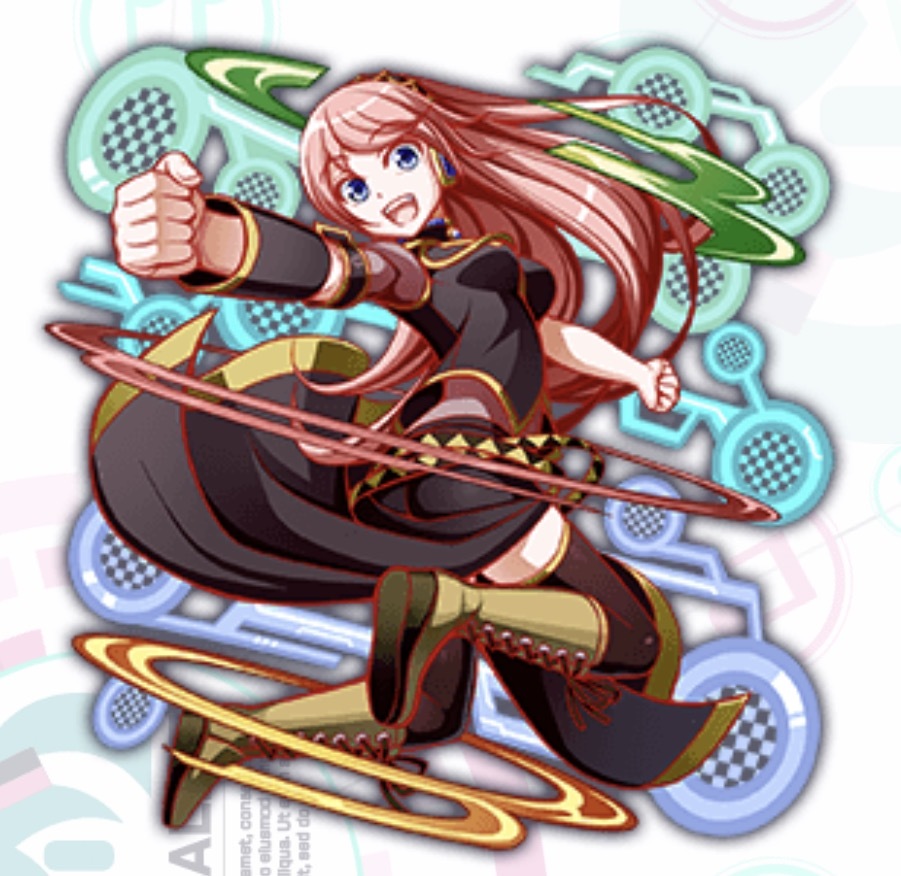 Skill: Luka converts red to crash skill panels. She also provides massive damage to a single enemy with a skill cooldown of 9 turns.

Tip: While she may not be the V4X version, she still can provide new players with panel conversion and a great amount of damage. She can also be used for 30 cost-limit quests as an attacker. 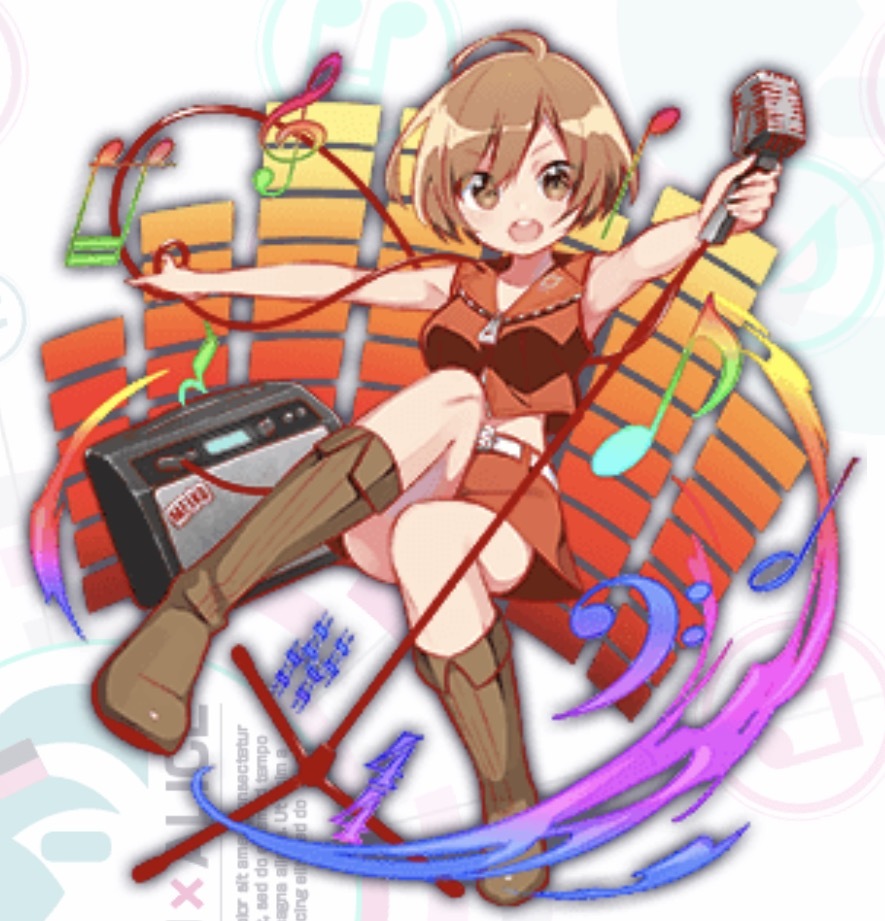 Skill: Massive damage to a single enemy, with a massive attack/defense/recovery boost to all red units for 3 turns with a skill cooldown of 9.

Tip: With her defense skill buff, Meiko is great for the tower quest, and can also be used for 30 cost-limit quests as a support unit. 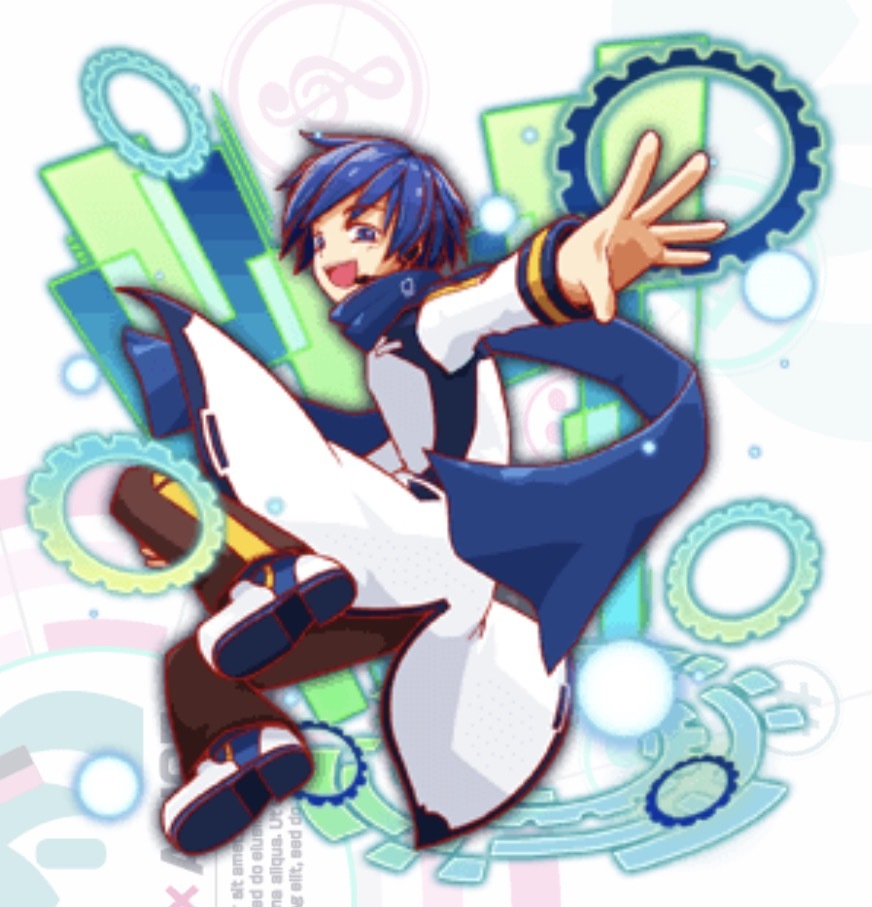 Skill: Kaito converts Green panels to blue, provides blue units +1 to tap, and a high boost to attack for 3 turns with a skill cooldown of 8 turns.

Crash Skill: Massive damage to one enemy, with a low boost to recovery for 1 turn.

Tip: Like Meiko, Kaito can also be used mostly as a support unit with his +1 tap and panel conversion skill. 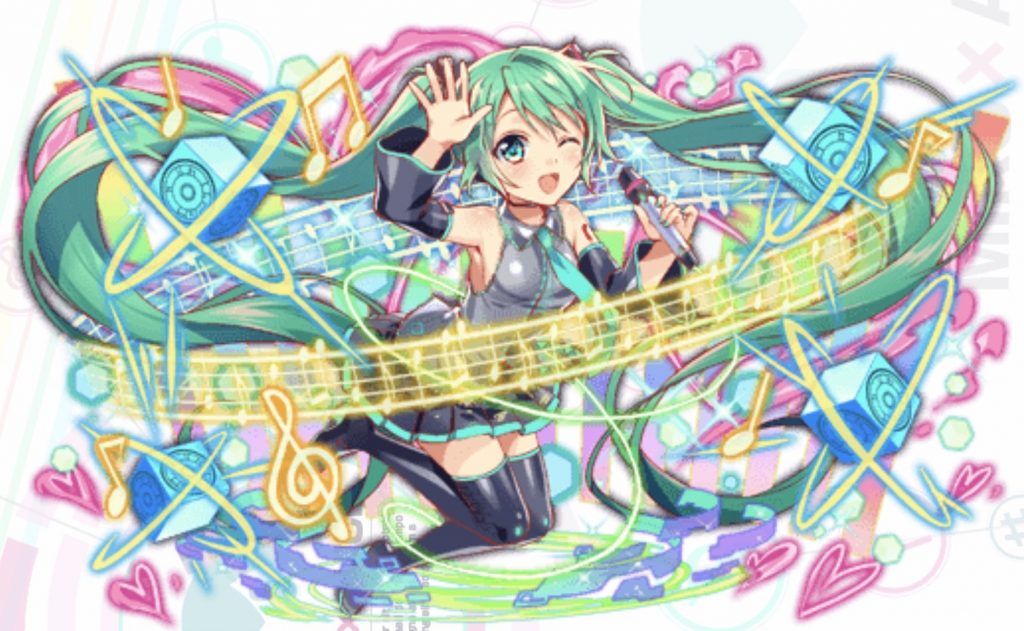 Tip: For this Miku unit, it’s best to use her as an offensive support since she is great for buffing the party and increasing panel chains with her skill. 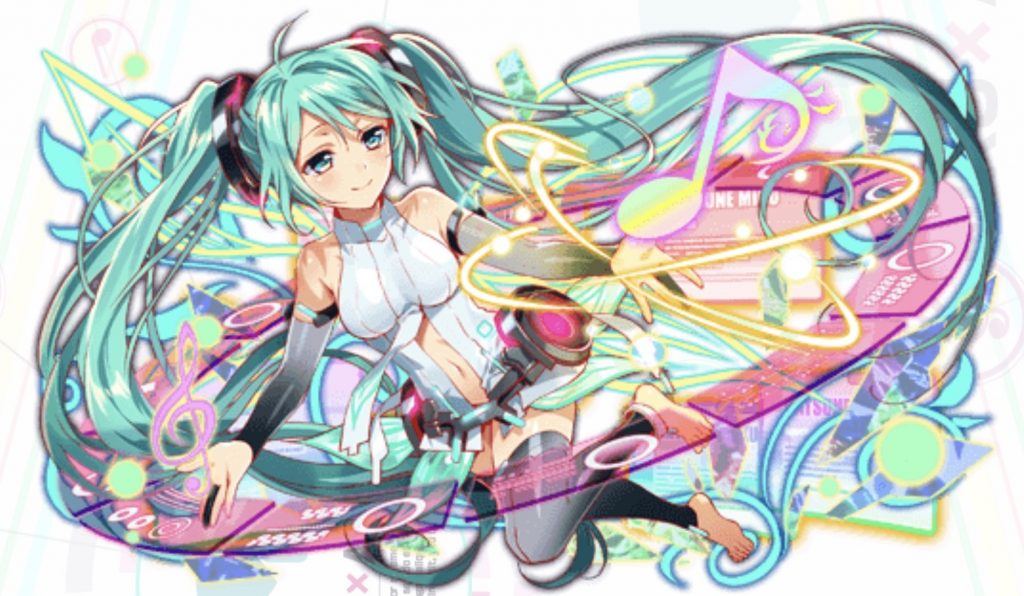 Tip: Hatsune Miku Append is a pretty powerful unit, shes great at providing burst damage, and inflicting “Damage Up” against enemies in one of the event quests. She counters Virus and absorbs junk and timer panels raising her counter up to 3. 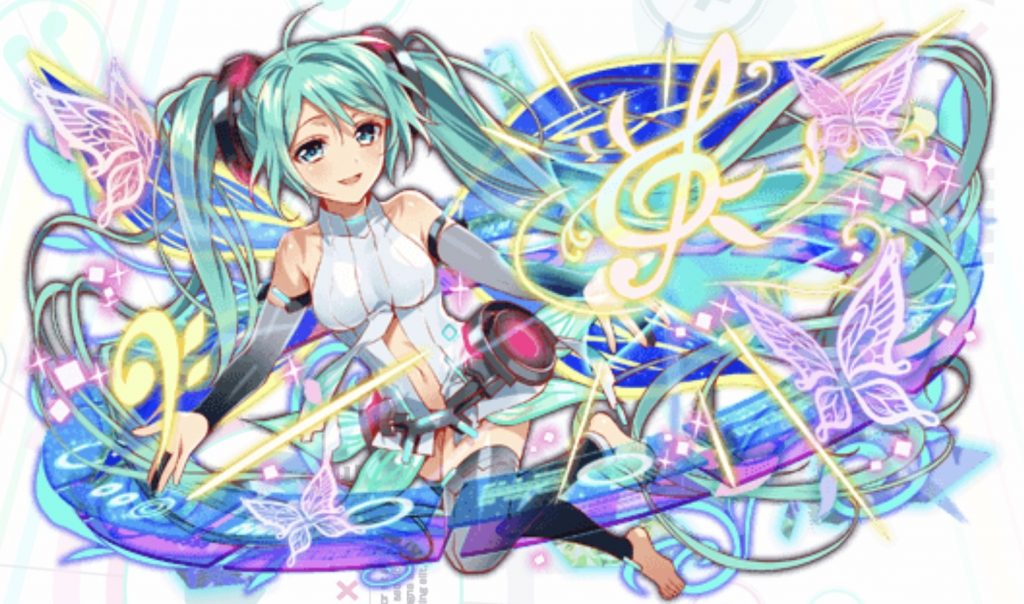 Crash Skill: Extra damage to single enemy.
Ability 1: Prevents enemy from disabling red, blue, green, and yellow panels when she is in front.
Ability 2: Destroy damage panels when in front, without taking damage.

Tip: Miku UA is a very strong attacker, she really shines in the Miku Lucifer Ultra Wizard due to her prevention of color panels being disabled. Overall her UA form is great for countering and providing damage with her Super crash panels being strong enough to wipe the screen. 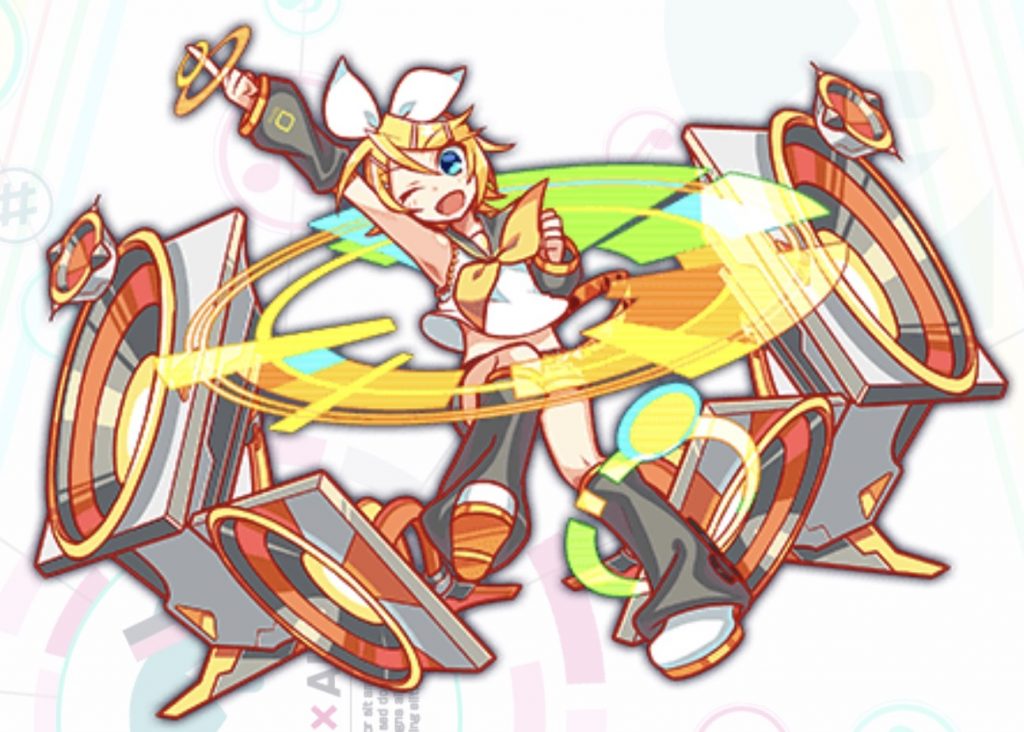 Tip: Rin is a great balanced support unit that is helpful for buffing the party. She’s super effective against unidentified types, and great for burst healing and getting rid of attack down buffs. 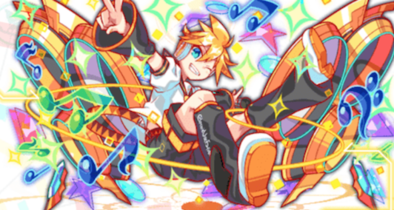 Tip: Len is a strong support healer if you don’t currently own the unit Baldr. He counters heart panel lock which is great when you’re in a bind and need heavy healing due to his increased heart panel drop rate for 3 turns. 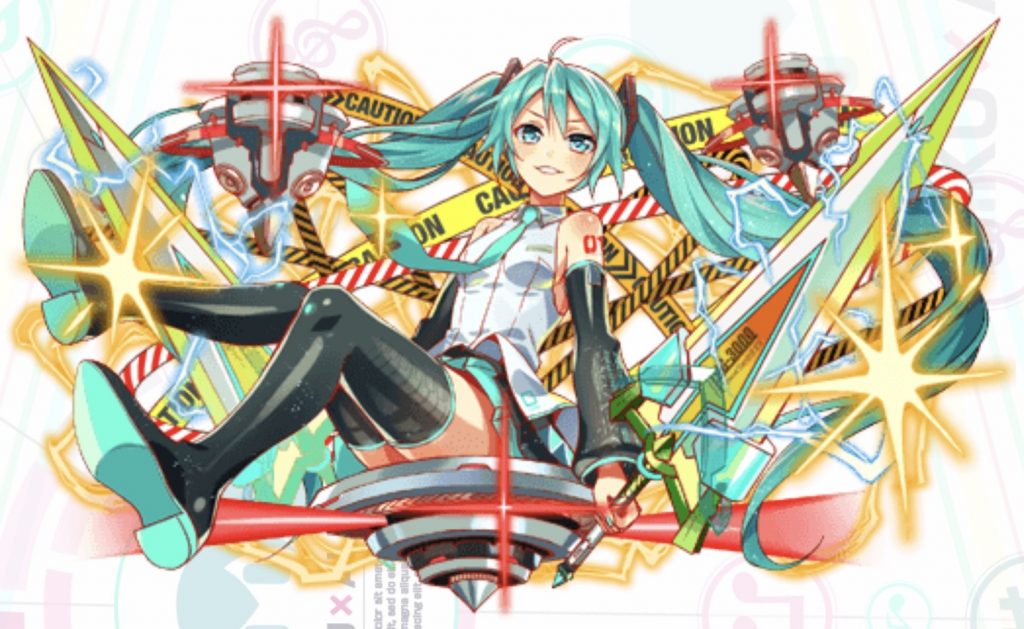 Tip: Miku V3 is an incredibly strong offensive healer. She can provide burst healing and recovery while damaging with only a 7 turn CD. She also provides an HP shield for getting through the most difficult of quests. Hatsune Miku V3 should be 1 of the first units to achieve a bug count of 99. 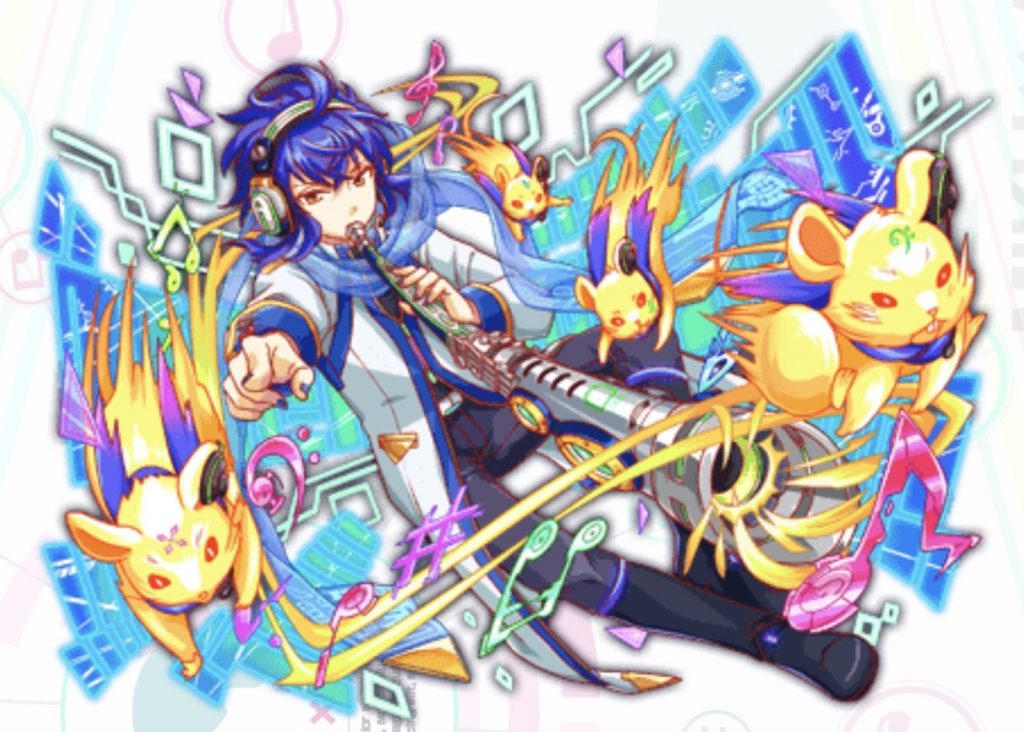 Crash Skill: Extra-high damage to a single enemy with low probability of inflicting sleep.
Ability 1: Break protected panels while in front.
Ability 2: Gain small health when breaking 40 panels in 1 turn. [With a bug count of 30]

Tip: Hamelin Kaito is a great offensive support unit to bug to 99. He works well for clearing the field and increasing units attack while having a chance to inflict sleep on enemies. 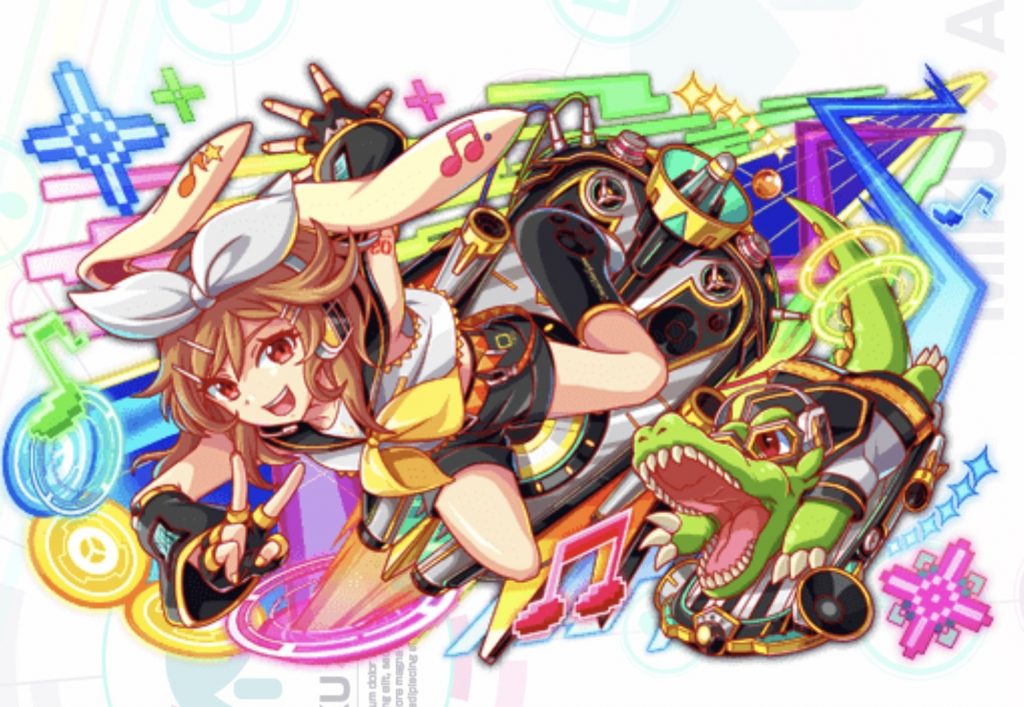 Tip: Rin is very easy to a bug count of 99. Her stats are very balanced but should be used as an offensive support to be able to set up the panel board. She can boost the parties’ attack and counter protected panels if needed be. 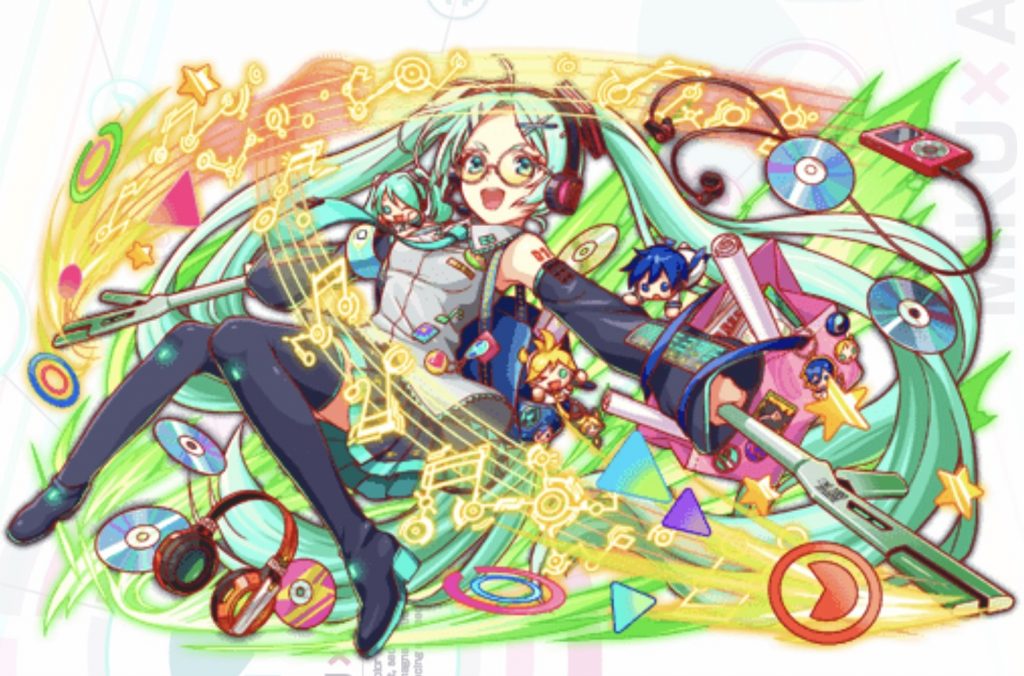 Skill: She converts one panel to a super crash panel and adds a +1 tap for green units for 3 turns.
Her skill cooldown time is 8 turns.

Crash Skill: Ultra large damage to one enemy, raise attack of green units slightly for 1 turn,
Ability 1: Break damage panels without taking damage when lead.
Ability 2: When fever bar is 50% or more, attack stat increases slightly. [Only with a bug count of 30]

Tip: The Miku Murasaki green version is a bit weaker than the Murasaki blue. Her stats are balanced though to make her an excellent support unit to bug to 99. Her collaboration quest can be difficult if you don’t bring at least 1 Luka V4X unit to make it easier. 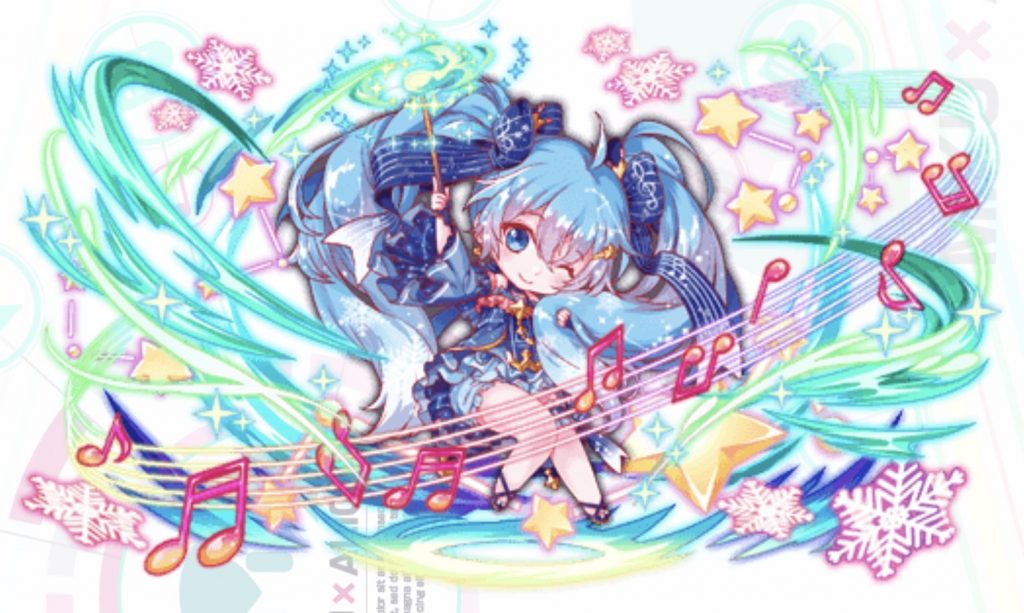 Tip: Snow Miku can be considered a great healer with an almost 4000 recovery stat. She can provide a nice counter to heart lock, while being a great defensive healer. 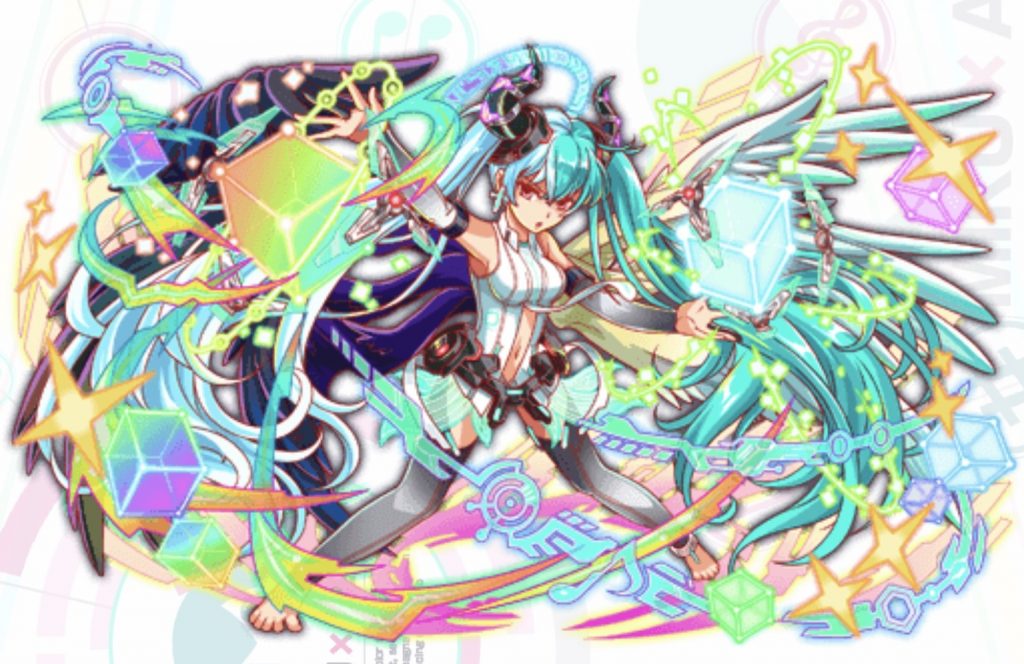 Crash Skill: Extra large damage to a single target.
Ability 1: Break protected panels when lead.
Ability 2: Immunity to skill bind with a bug count of 15 that is later implemented.

Tip: Miku Lucifer is an all around great unit. She can provide a nice offensive role, provide burst damage, and later on when her 15 bug count ability is implemented she can possibly counter skill bind quests.