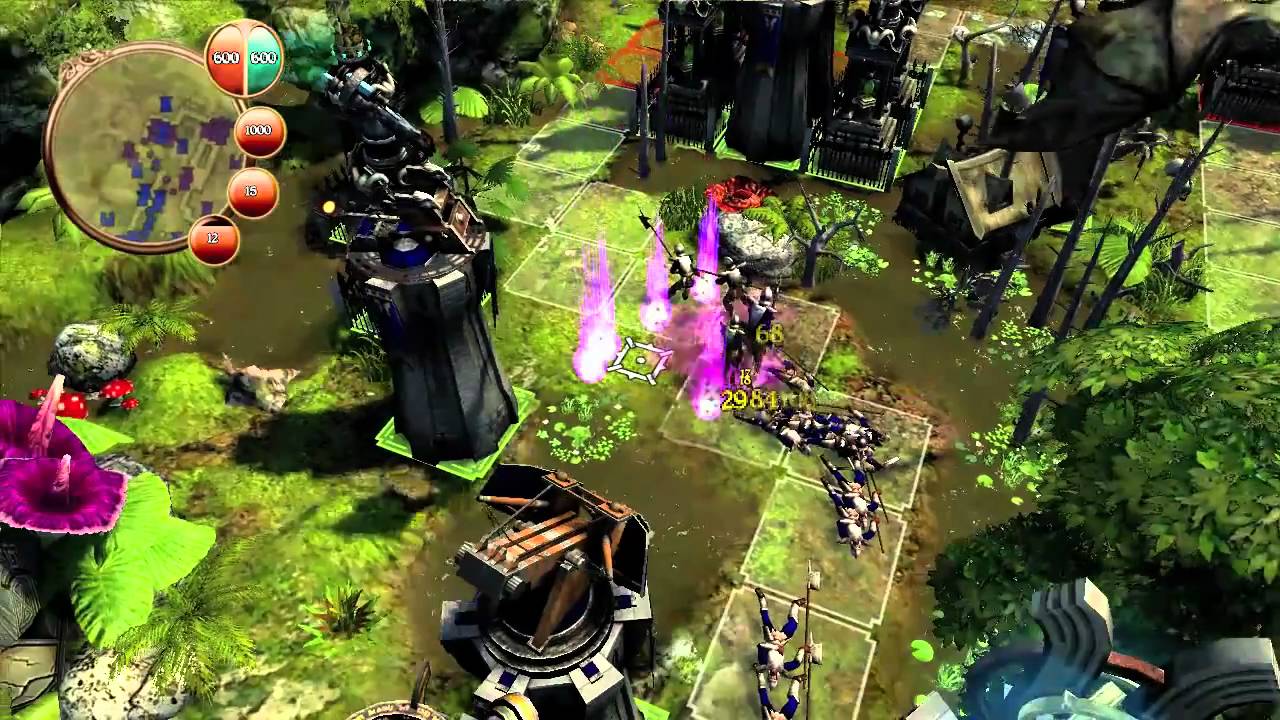 At first glance, you may be forgiven for thinking this is ‘just another tower defence title’; after all, it features towers to block and defend against incoming attackers. However, Defenders of Ardania is a tower wars game, a genre derived from Tower Defence which originated as WarCraft 3 multiplayer mods.

The premise is simple: each player releases up to ten units in regiments to attack the opponent, while defending their lighthouse (main tower) against enemy infantry. The battle ends once the requisite lighthouse(s) are destroyed.

The first thing you notice is that Defenders of Ardania’s visuals are nice and crisp – even the menu looks great, with an animated waterfall in the background. Units on each side are marked with different colours and the animation of each is smooth.

Unfortunately, Defenders of Ardania goes for visuals over functionality when laying out the tile grid on which you build towers. You will need to turn the grid and health bars on before each level – they should be on by default. The grid highlights places where you can place towers, as well as spots which will offer this such as resources, and spots where a tower may gain extra range.

Tower building is your typical tower defence fair. You build and upgrade various towers, repairing, upgrading, or selling them as needed. You start out with catapult and crossbow towers, unlocking more powerful towers later. As you place towers, each one adds about four tiles to your territory per side.

The locations you can place them and number of towers you can build are fairly limited compared to other tower defence games – so part of the strategy is where you place which towers. Towers and units cost money and resources; although both are constantly replenished, replenishment in this way is too slow to win the battle in later levels. There are numerous other ways earn money, including killing enemy units, as well as special blocks you can build towers on to replenish resources faster.

When it comes to launching attacks, you can define targets – such as enemy squads or towers – by placing a bounty on them. Your soldiers will take the most direct route to the target(s), regardless of how many towers that path puts them in the range of. As a result, some of them will be killed on their “speed at all costs” route, but try telling them that.

You can change their route, to a degree, by placing a rally point which makes your troops pass through that tile on their way to the lighthouse. If the rally point is inaccessible, the soldiers will ignore it. Another consideration when planning your layout is that every time you send out a regiment, that unit type gains experience. The longer they walk, the more experience gained. It works well with the unit-spamming gameplay.

Sitting somewhere in between the offensive and defensive parts of this title, Defenders of Ardania features a magic system. Players can cast around five different spells – offensive and defensive. Each spell takes varying times to recharge and amounts of money to cast. The first couple of spells you acquire are thunderstorm which drops a lightning bolt on unsuspecting hostiles; and repair base which partially repairs your lighthouse.

The other big single / multiplayer mode is skirmish, in which you can play on maps that you have previously defeated, with varying conditions. Styles include: normal – the same as a standard campaign level, limited resources – in which you don’t have access to tile bonuses, and survival mode – which plays like a standard tower defence game. Every unit is available in survival, regardless of their status in the main campaign.

Overall, Defenders of Ardania is a solid tower wars title with little competition in the genre at the moment. Unfortunately, it’s let down by a large difficulty jump and, although it’s a visually pleasing title, the grid displaying locations isn’t on by default – a strange omission for any tower defence title.