Originally, Final Fantasy VI’s Terra has always appeared as a character with a lot of magic attacks at her disposal. Of course, when you have played the original game, you will know that Terra has gone to 3 different phases. First, when she was an emotionless General for the Empire. Next, when she was the Terra we are all familiar with. And lastly, when she transforms into her Trance state – a display of her Esper powers in full circle.

Nonetheless, it seems Square Enix decided to include the 3 phases of Terra in Final Fantasy: Brave Exvius. The Magitek Terra unit was given to people who pre-registered the game. The normal Terra and this new one, Trance Terra, are the two Terra(s) you can get in-game.

Now that Trance Terra is available in the GL version of Final Fantasy: Brave Exvius, let’s look at her stats and profile. After that, you can check whether she is the magic user you have been waiting for should in case she gets released on the Global version. One thing’s for sure, as of 4/20/2017, she’s the best magic user until Dark Fina gets her enhancements, which will take a long time to happen. 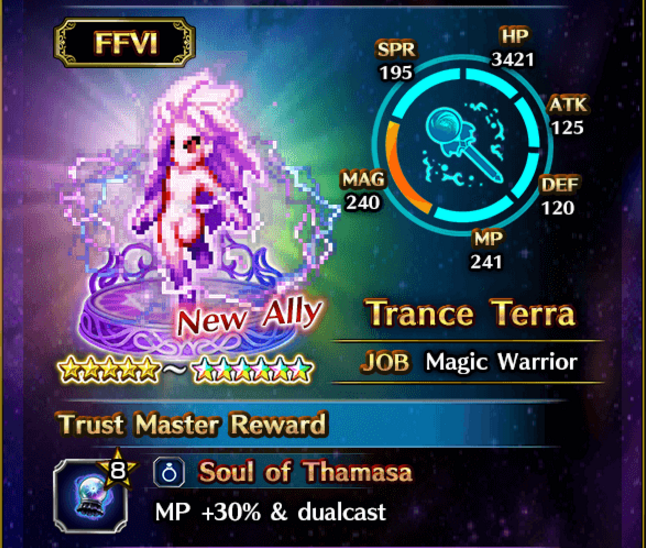 Trance Terra’s Limit Break is awesome because it is a 9-hit combo. At 6-Stars, the attack damage is over 780%! Fill her Limit Gauge and I’m sure majority of the enemies will be killed or almost within a punch or two to get knocked out.

Despite her insane magic capabilities, Trance Terra suffers from mediocre HP even for a 6-star unit. You need to equip items to boost her HP to help offset that. Also, please note that her DEF is pretty ok for mage but of course you need to protect her. Exdeath can equip some of the best armors unlike Trance Terra. Once you’ve got her optimized, then you are all set to go and you won’t have to worry about her low DEF and HP.

• Dual Black Magic – Unlocks at Level 1. This can enable Trance Terra to use black magic twice in one turn.

Trance Terra‘s special abilities are why she makes an excellent Magical Damager. Of course, she can support with cure spells and Full-Life. But Trance Terra is first and foremost a magical attacker. Chaos Wave is very powerful. Dual Black Magic will ensure that you can deal twice the magic damage in one turn.

By equipping Ramuh with Trance Terra, you won’t have to worry about using all your MP since it will auto-regenerate. Plus he will also increase her magical powers.

After comparing my opinions with a few other players from the Japanese version I have to say that she’s a good catch. If you manage to summon her quickly, awaken her to 6-Stars and then work on maxing her level so you can cast Full-Life.

With her killer Limit Break and super helpful Magic and Special Abilities, she will be a valuable asset to any FFBE team. Compared to Terra, if you have a good healer, then Trance Terra is the best option.

Alright, that covers everything on Trance Terra from Stats to Limit Breaks and so on.