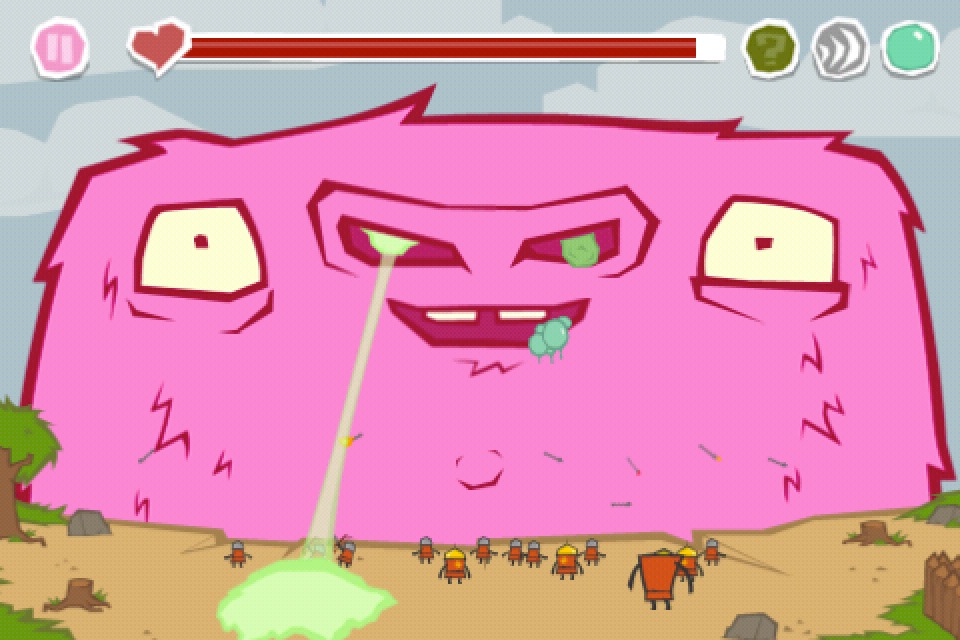 Gross-out games don’t usually fly with us. As soon as a character starts flicking or flinging anything that came out of their bodies, we usually lunge for the “home” button to play something else. There are exceptions, though, and Gobtron is one of them.

Gobtron is a castle defense game where you have to use your giant creature’s snot, boogers, and other bodily byproducts to defend yourself. With a flick of the finger, you can smack down invading armies with a big, dangling ball of nose gunk.

As Gobtron evolves through the centuries, you’ll face more advanced armies, from cavemen and ancient Egyptians all the way to modern-day soldiers and space-age robots. None of your foes are nearly as large as Gobtron, but they can fill the screen and overwhelm you if you’re not fast enough.

Gobtron’s defenses will improve over time, and between levels you can upgrade his health, attack, and special moves. Some of these upgrades are fun surprises, like a screen-clearing fart attack that only appears after you’ve maxed out your other abilities. These new abilities are amusing, but won’t fundamentally change the way you play the game.

For a gross-out concept, Gobtron’s got a surprising amount of depth. Upgrading your creature is half of the fun, and the gameplay can feel pretty intense at later levels. However, you never need to do anything more than flick and tap as fast as you can, and the fun won’t last forever. Plus, not everyone will be able to look past the game’s icky concept. If things that come out of your nose don’t disturb you, Gobtron is a clever little defense game with an adorably snotty hero.