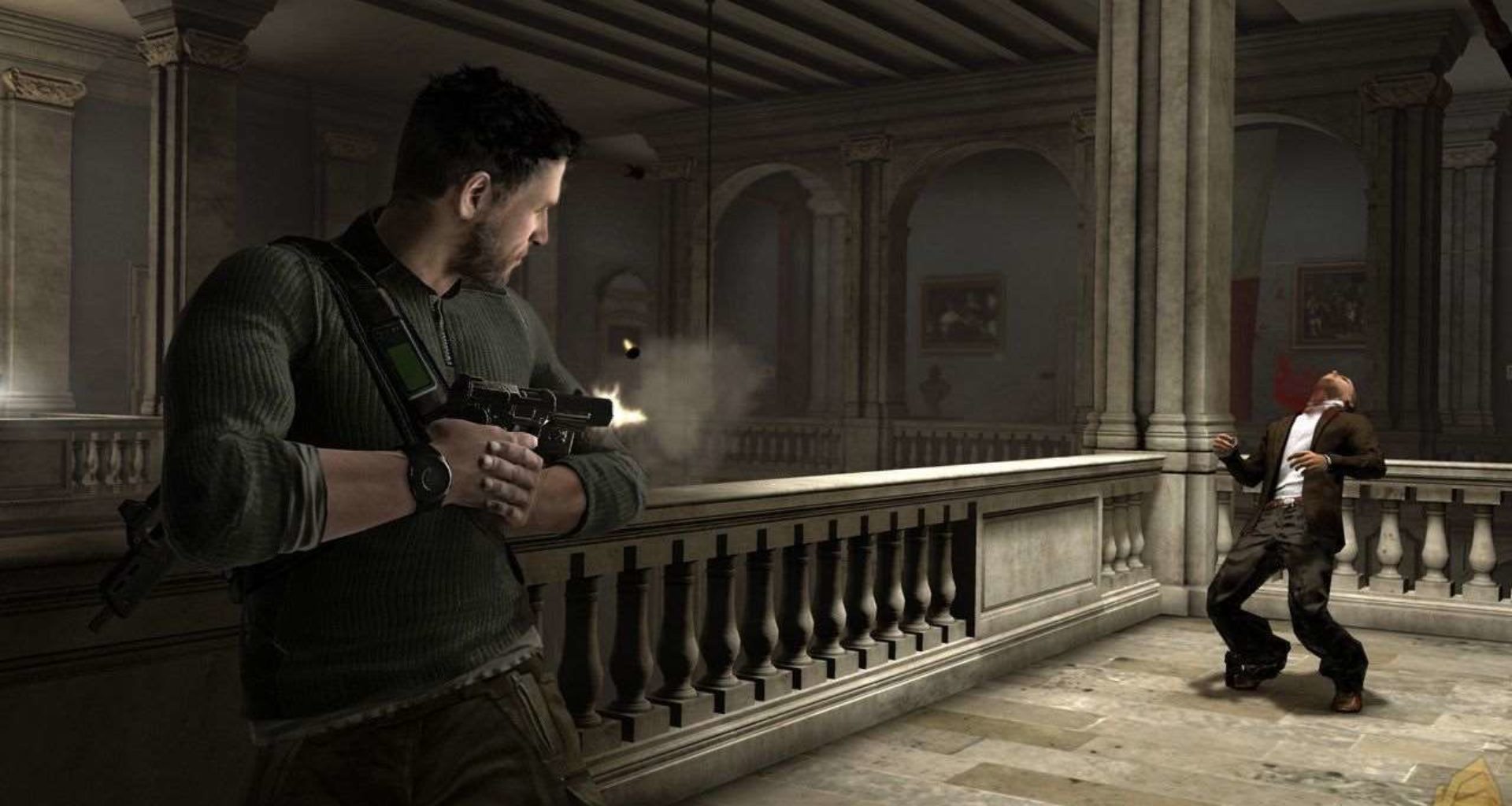 Despite being nearly a pensioner, Sam Fisher’s still got it. Scaling buildings, severing spines and suspending himself upside down by his thighs for extended periods of time are still no problem for our aging hero. In fact now he’s growing himself a beard – which we imagine can only triple his awesomeness once fully grown.

But all is not well with Mr. Fisher as fans of the series will undoubtedly recall. The previous title, Splinter Cell: Double Agent, saw the treacherous murder of his daughter Sarah after Sam was betrayed by the organisation he swore to protect. Conviction is set roughly two years after these events and continues Sam’s investigation into the blood-coated conspiracy of the Third Echelon… as well as stopping a few hundred terrorists along the way of course.

Ubisoft have taken all of this on board and presented us with a whole new-look Sam Fisher. His hardened emotional exterior has left Fisher feeling cold and therefore more ruthless in his methods. He is now more agile and moves around like a grey wolf stalking his prey. But despite this gruff killing machine, Conviction is surprisingly more like a stealth game than the previous Splinter Cell titles.

Without the technological support of his former employees, the Third Echelon, Fisher doesn’t don his typical tight black cat-suit and fancy goggles. However, he’s still just as sneaky without his gadgets thanks to a series of gameplay improvements. For starters, one of your main staples of taking cover is now more streamlined than before and lets you slip into the shadows at the tap of a button. Looking across to an opposite wall and tapping the same button sends Sam safely into position without the embarrassment of flapping around like an idiot in front of five armed terrorists.

It works brilliantly and lets you focus more on zipping around like a super-spy than battling the controls to stay hidden (which we’ve seen in previous Splinter Cell games). Of course there is the draw-back of it working too well and some fans of the series might be annoyed at Ubisoft’s choice of a kiddie-friendly cover mechanic.

However, the developers have added in some extra functionality to Sam’s aiming while taking cover that helps expand the relatively forgiving controls. Aiming from cover is now a lot more precise, letting you line up your crosshair and step out to take a deadly snap-shot, before settling back into cover seamlessly. The days of finger-crossed blind-fire are long gone and instead you feel like a ninja assassin with your silenced pistol picking off targets with ease.

When in cover, the visuals in the game change stylistically to let you know you’re relatively safe by switching to a high-contrast black and white view. It works beautifully but with Sam taking cover for a large part of the game, you will start to miss the stunningly detailed (and colourful) outside world thanks to your almost constant monochromatic filter.

Of course, if you want to ditch the whole sneak and cover lifestyle you can always just charge around with a shotgun and a death wish. Splinter Cell still offers an excellent third-person shooter experience without the stealth elements thanks to clever enemy AI and a polished control system. Sam can pick up objects like chairs and use them as weapons. He can even turn his environment into a weapon, for instance smashing an enemy’s face into a mirror or nearby porcelain sink at the press of a button. Although the up-close and personal approach is a lot harder to clear a room than say, hanging from pipes and strategically picking off units one by one, there are times in the game where you will seriously consider either course of action.

The levels are all well-thought out and almost always allow for multiple routes and methods of completion that will compel many to replay and improve their overall score. It almost gives the game a sandbox feel, letting you explore and experiment as you see fit. Furthermore, Conviction includes a ‘Persistent Elite Creation’ system that encourages you to try out all sorts of play styles, such as performing silent headshots, close-quarter melee kills or repeatedly pulling mercenaries out of open windows. With every interesting technique, Sam is awarded points that can be spent on upgrading weapons and gadgets as well as unlocking costumes and bling for the game’s multiplayer characters.

Keeping your wits about you throughout the game is important too, thanks to a decent enemy AI system. The range of enemies you’ll encounter all move and act like hardened and well disciplined killers with a variety of weapons. If you are spotted, they will often call for backup before investigating a noise or movement. They will take cover and hold their ground or flank you in a firefight.

Often the number of enemies will be overwhelming and when the odds are stacked up, you can use a new feature introduced in Conviction known as ‘mark and execute’. It allows Sam to tag and prioritise enemies or objects for quick, automated dispatch and opens up a new aspect to strategically clearing a room. For example, from the safety of a high window vantage point you could tag a light bulb and then two enemies closest to the door. When you trigger it and burst into the room, your first shot distracts a guard by turning him in the direction of the smashed light bulb and your following two shots render the two guards dead. The final kill is slowed down letting you truly appreciate the finesse of your breach.

At first I thought it was taking away a lot of my own skill, with perfect head-shots and no assistance of my own whatsoever. However Ubisoft have balanced out the ‘mark and execute’ technique so that using it requires you to perform a stealth takedown in order to reactivate it. More importantly, taking out enemies in this fashion doesn’t necessarily result in a stealthy operation and you’ll end up with a bullet in the spine if you fail to survey your surroundings properly. Setting up your perfect ‘mark and execute’ plan of attack can require just as much skill as having to do it manually. Each weapon also carries its own attributes that includes a maximum number of ‘marks’ it can perform, adding an extra level of strategy as to what kit you carry around with you. Finally, if you still think the ‘mark and execute’ feature is cheap and really roasts your beans you can ignore it and charge into a room lobbing grenades and screaming like a banshee anyway. Good times.

Right from the start of Splinter Cell: Conviction, the graphics and presentation are near-perfect. As you would expect from a game of this sort, the lighting effects in a fully-realised 3D world are brilliant. Sam can virtually go anywhere his little legs and arms can carry him, with scenes taking place in busy streets, an office, run down factories and multi-story mansions. Even the opening sequences are easy on the eye, guiding you through the finer controls of the games with stylish overlaid text and slick highlighting of objects wasting no time in throwing you into the action. Once you’ve finished the single player, there’s even some tasty multiplayer goodness to be had as well.

Although Conviction only allows for two player multiplayer, the four modes included allow for hours of online, split-screen or system link gameplay. One mode, called Hunter allows two players to clear a room as efficiently (or as dramatically) as possible. If either player is detected, the only penalty is a wave of reinforcements that can almost be considered a reward if you’re particularly trigger happy. On the opposite side of the Hunter coin is a mode called Infiltration which is similar in map design but detection results in automatic fail. Last Stand mode places your two spies next to an experimental and quite unstable EMP device that you must defend against waves upon waves of enemies who are all trying to set it off by damaging it. The final mode is called Face Off and is the only non-co-op mode in the multiplayer arena. On the surface it is almost identical to Hunter mode with its waves of enemies, except you are also trying to eliminate each other in a competitive manner as well. Two spies sneaking around trying to kill each other while trying not to alert enemies certainly is an awesome experience. Quite often you will completely forget about computer AI enemies and accidentally walk straight into one while trying to keep an eye out for your opposite partner in the shadows.

Finally, the core multiplayer mode is the highly anticipated two player co-op campaign mode which follows a completely new story to the single player game. It allows you and a friend (split screen, LAN or via Xbox Live) to take control of a Third Echelon agent named Archer and a Russian Voron agent called Ketrel. The story takes the form of a prequel to Sam Fisher’s campaign and sees these two agents hunting down missing weapons of uber destruction. Both Archer and Ketrel have the same moves as Sam and teamwork is key to completing what was some of the best co-op gameplay I’ve had the pleasure of experiencing in recent memory.

There is a lot to love in Splinter Cell: Conviction. One of the main highlights takes a page out of Jack Bauer’s autobiography and lets you interrogate characters throughout the game by extreme force. For example you might use a computer panel as a nice headboard to help your victim remember something; or simply throw him through some glass to get him to talk. All of the narrative and story-driven dialogue is beautifully pitched throughout, making the plot meld seamlessly with the gameplay.

As far as negatives go, they are few and far between. The biggest is probably a fairly short single player storyline (around 6 hours, but the co-op campaign does offer another 5 on top of this). There are a couple of graphical glitches too, such as ‘mark and execute’ headshots defying the laws of physics and going through walls. But overall, Splinter Cell fans will still appreciate all the features that have been poured into Conviction and even Sam Fisher virgins should check this game out.