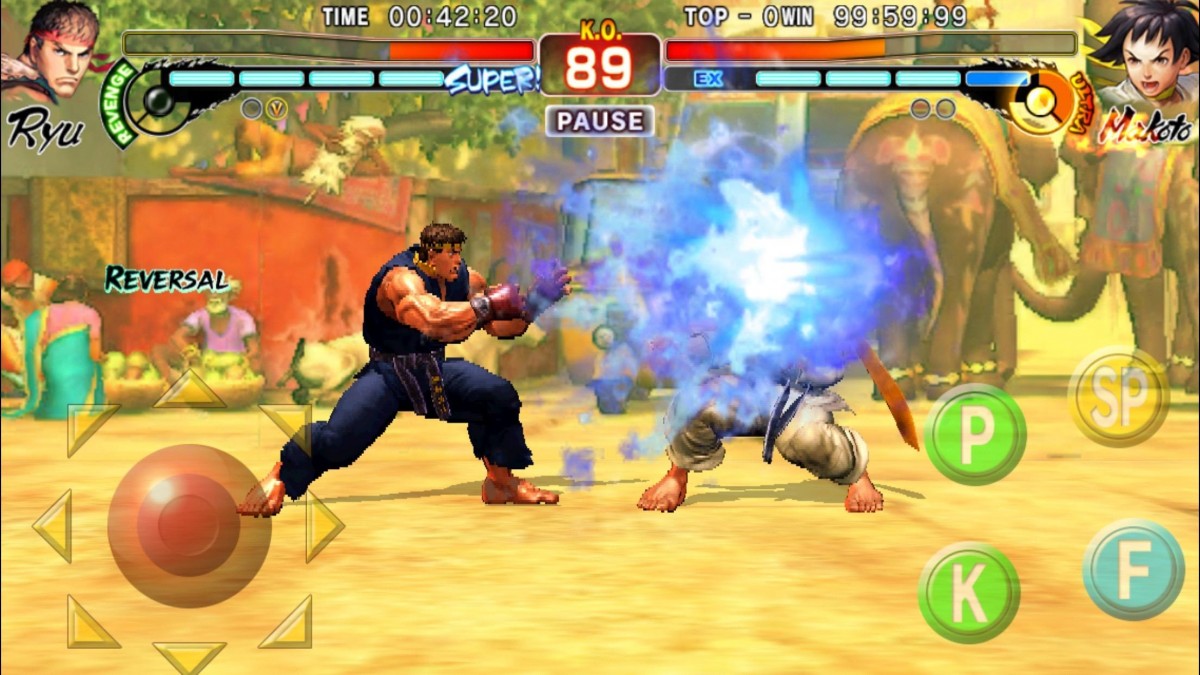 Street Fighter IV has just received a free update that adds Cammy and Zangief to the roster of playable characters, bringing the grand total to ten.

Zangief is a hulking block of muscle who moves slower than a drunken snail but who packs a wallop in every punch and grapple. He’s so tall that his head nearly touches the health bars, giving him a long reach that makes up for his movement deficiencies. We’re also happy to report that his epic spinning pile driver is pretty easy to pull off. Like the other fighters, he plays pretty much exactly like his console counterpart, so you probably already know what you’re in for if you choose him. If you want to defeat your enemies with as few moves as possible, Zangief is the way to go.

Cammy, on the other hand, is graceful, quick, and sports special moves similar to Ken and Ryu’s, so she’s easier to play as if you’re not familiar with her move set. Just do fireballs and dragon punches, but with kicks instead of punches. She has lots of long-range attacks and can hop around the screen with ease. Of course, we’d be remiss if we didn’t mention that her abs and glutes are lovingly rendered, making her the easiest fighter on the eyes.

This update adds value to an already impressive package. Street Fighter IV comes at a premium price, but it’s hands-down the best fighting game on the App Store. Highly recommended.

Despite the device’s lack of physical buttons, the controls work great. Don’t expect the precision of an etched-out D-pad like the PS3’s, or the tactile feedback of an arcade stick. But considering that you’re sliding and tapping your thumbs on nothing but glass, Street Fighter IV feels marvelously responsive.

We admit that the D-pad in SF4 is big and ugly, and that its colors are loud enough to attract wild birds in mating season. However, it’s perfectly designed to accommodate the swoops and flicks necessary to perform all the sonic booms you’d ever want to throw. Arrows pointing in all eight directions make it easy to differentiate between inputs, so you’ll never jump forward when trying to dash.

The attack buttons have been minimized down to punch and kick, which suits the game just fine, and a chargeable F button lets you power up and unleash a flashy knockout punch. Those unfamiliar with the characters’ special attacks can enable the SP button, which lets you do these moves without having to memorize the joystick patterns. And last but not least, the gauge under the health bar acts as a super combo button that lets you channel the power you’ve built up throughout the fight. That’s a lot of abilities built into just a few buttons, and everything works surprisingly well.

Unfortunately, the roster has been downsized to just eight characters: Able, Blanka, Chun Li, Dhalsim, Guile, Ken, M. Bison, and Ryu. This is the game’s biggest drawback, as a single play-through of the tournament mode can be completed in under 15 minutes. Also disappointing is that multiplayer is only available through a local Bluetooth connection. It works just fine, but we wish we could duke it out with players online.

The game makes up for these drawbacks with its polished presentation. The art is lively, and the animations have been trimmed down to their essentials in order to give fans of the series the impeccable control and timing they’re accustomed to. The game’s sound is another high point of the experience. Every time you land a hit, a deep thud comes through your earbuds, making even basic attacks feel satisfying. And of course the characters have voices, so you’ll get to hear Dhalsim belt out the word “yoga” every few seconds.

It’s not just the hardcore fans this game will appeal to. There’s an extremely deep tutorial system built in that walks new players through everything they’ll need to know about the game, including many of the intricacies veterans take for granted. Also helpful for newbies is the special moves list for each character available at any time on the pause menu.

Overall, Street Fighter IV is the fighting game that fans of the genre have been waiting for. While it only has eight fighters and a limited multiplayer mode, the core mechanics are as solid as we could have hoped. Now if you’ll excuse us, we have some hadokens to throw.