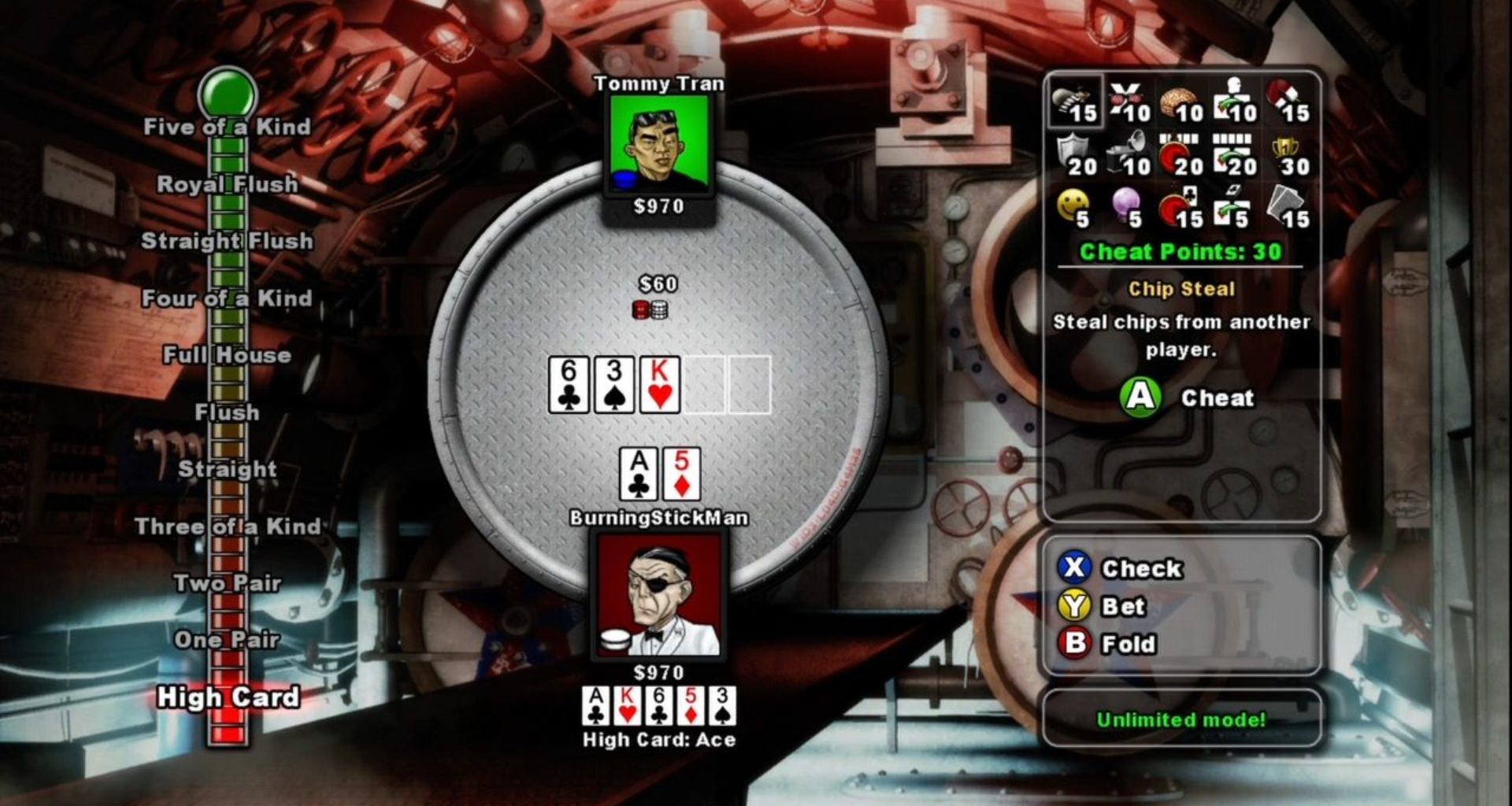 Texas Cheat ‘Em, then, is pretty much that except that in addition to pretending you have a better hand than you do (the “bluff”), you can actually cheat.

There are two different types of cheat – player vs. player where you actually directly assault or are assaulted by another player and then general cheats. In pvp cheats, you can attempt to steal chips, cards, swap decks or just see the hand of the other player. If you attempt a pvp cheat, you will need to defeat the other player in a game of skill – such as mashing the A button in order to make your little mini-game horse cross the finish line first.

General cheats require you to complete a minigame, chosen from a (short) list of generally gambling-inspired games. In one, you need to stop the roulette wheel in a particular wedge (which varies in size). In another, a simple dice roll is required. Blackjack and slot machines also make an appearance. These games are pretty basic but they’re an interesting aside and a good way to ensure that you can’t just wholesale cheat all the time.

In addition to having to complete a mini-game, cheating is further limited by requiring the player has enough “cheat points” to attempt a cheat. Cheat points are freely provided each round of a hand and the more beneficial cheats (such as the “guaranteed win” cheat) are very expensive in terms of points, with a hard minigame (roll 11 or more in a random roll of two dice) further protecting other players. If you attempt a minigame and lose, you still spend the cheat points required. You can also tell when someone else is cheating, however unless it directly affects you or changes something you can see (like a community card) you will not know exactly how that person has cheated.

The cheats are numerous enough, with a variety of abilities that makes them more or less useful depending on the situation and your opponents. They work quite well and keep the game interesting, above and beyond the core game of poker that’s also happening at the same time. They can be quite distracting if you’re trying to concentrate on the game and you need to pay more attention in case someone screws around and breaks the hand you’ve been working towards. Fortunately there’s a handy “thermometer” on the side of the screen that shows the best hand you can make up against an ordered list of the best hands you could possibly make. If you’re a newbie to poker, this can be quite handy as a quick reference.

The cheats definitely change the strategy one would normally expect to employ in a game of poker; they keep you thinking and keep you paying attention. The game is also much, much harder to win if you don’t cheat – forcing you to participate in the shenanigans if you want to last very long at the top table. Whether that sounds like something you actually want to do or not is something we can’t answer – it certainly seems a little unusual to us.

Visually, well, this is… how to say it nicely… awful. One of the most unattractive games ever seen for sale and that includes a myriad of downloadable rubbish on the PC. The graphics don’t generally affect your ability to enjoy this type of game but they’re so bad you can’t help but notice them. The sound is better but it’s still very much in the “my first videogame” school of game assets – the icons and characters look like low-budget clipart. All in all it looks and sounds very much like what you might expect to see in the Community Games section of the Xbox Marketplace (not yet available in NZ, (un?)fortunately).

If this game was offline only, it would have lost another 2 points. Fortunately the online multiplayer is actually half decent so if you like the idea of cheating against real people in a game of Texas Hold ‘Em, this could still be worth pursuing. There is a fairly comprehensive offline “campaign” mode but it’s not particularly interesting. If you’ve got nothing else to play and your internet is offline and you’re out of books to read, the gardening is done and there’s no hot water to do the dishes… there are worse things you could spend your time with.

Should you buy it? Probably not. If you’ve been hankering to cheat in poker, there maybe something here but that has got to be a pretty small market segment; smaller still when the market is restricted to people within that group that can handle the awful graphics. Not recommended.