The executioner role is to get a certain member of the town lynched, and when you execute someone, you will remain immune for the rest of the day.

How to Get Somebody Lynched Properly

The first thing you need to remember is that do not get somebody lynched on the first day because whoever you target, will have a town or mafia role and people will become suspicious of you. If you do it on your first day, the chances are that you will get caught and you will get lynched yourself as a result of backlash. However, if you are successful in lynching a person in your first day, you will have a new role of jester. So it means losing your target as an executioner is not a bad thing for you because this way you will maintain the position of the executioner. Certainly, if you are looking forward to becoming a jester, you can take a chance on the first day, and if you succeed, it would be totally becoming.

Pretending to be a Lookout 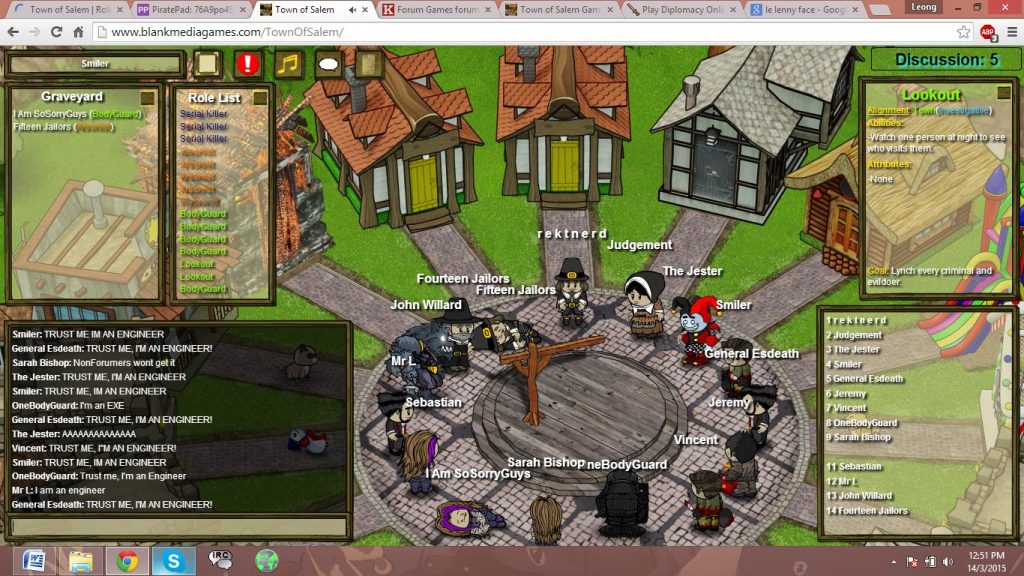 There are different methods to get somebody lynched, and the first one is to pretend that you are a lookout because a lookout can see who visits who. When you pretend that you are a lookout, you can say that I am investigating someone who died last night. You can pretend that the person whom you are visiting is the executioner and you are here to investigate him. You can make a strategic story to convince someone that you are the investigator, for instance, you can tell a person who visited somebody last night and who is dead now that he was the only person to visit the to-be-dead man, and thus all suspicion is on him. Now, if your story is convincing enough, the town members might execute the people whom you investigated, considering you a real investigator.

Well, if the situation goes wrong and the people aren’t convinced by your story, then you can simply apologize and accept that it was your mistake that you took the wrong person for a criminal. Here you should act like you want to live.

Pretending to be a Sheriff

The second way to get somebody lynched is to pretend that you are a sheriff, and finger somebody immediately as a serial killer. This method might be the worst way to do it because when you say you are sheriff, it will get you the attention of the real sheriff, and if this happens, you will be investigated immediately. If you are found guilty, you will be stuck in a loop where people won’t trust you and they will possibly believe that you are the executioner, and you certainly don’t want that to happen. It is a viable method but never use it if the sheriff is already dead.

Pretending to be an Investigator

Pretending to be the investigator is the best way to get somebody lynched without attracting the suspicion. And when you are pretending to be an investigator, you can accuse people of working with weapons. So, when a person works with weapons, it has three possibilities: he will be a veteran, a vigilante, or a Mafioso. You also have to make sure whether the Mafioso is a viable role in the game for this to work, and it is the least suspicious way to get somebody lynched. You use the exact weapon line and point towards a person and the townies will lynch him more often than not. If the person to whom you are pointing says no I’m not the Mafioso, even at this point the town people will believe you because they will think that the accused person is trying to defend himself. At this point, you can also remind the town people that this person is evil and make sure that townies come on the wrong decision and consider the accused person as evil. Do not try to force them, otherwise, they will suspect you, and you have to be very psychological in this regard.

Pretending to be a Vigilante

The final way to get someone lynched is by claiming that you are vigilante yourself. You can make a story by accusing a person and saying that you shot this person and he is immune to your bullets because the only immune roles in the game are a serial killer, arsonist, godfather, executioner, and people who had been jailed. The good thing about this act is that the jailer will turn to your side because he clearly knows that he didn’t jail that person last night, so from where did he get the immunity to the bullets. If you are convincing enough, the town members will come to the conclusion that the person is really evil, so it’s a very good way to get somebody lynched. The interesting thing about this method is that the Mafioso will help you in this because the target is normally a town role. Also, remember one thing that you are immune as an executioner so you don’t have to fear Mafioso. The only role you ever have to fear is the arsonist. Never claim to be any other member than those that are mentioned.

Do not be Overactive

The second most important thing that you need to remember is, never be overactive. Simply yelling out lynch this person because he belongs to mafia and saying such things over and over again will only make the situations worse. You don’t want to make it look like that you want them lynched really bad because, if you proclaim this out loud, the town members will catch on you and you certainly don’t want that; this is a very bad thing to happen.