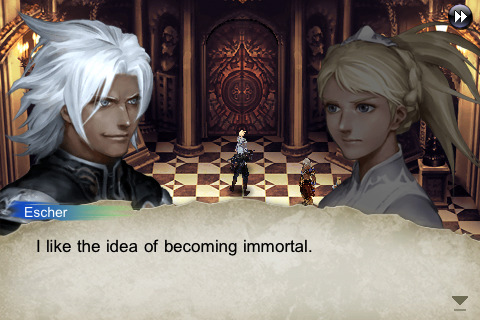 Chaos Rings is the Square Enix RPG we’ve been waiting for. After months of second-rate iPhone games like Crystal Defenders, Vanguard Storm, and Sliding Heroes, the iPhone finally has its own triple-A Square Enix RPG that actually reaches the heights of a Final Fantasy or Chrono Trigger. With an epic storyline and deep gameplay, Chaos Rings should be at the top of your iPhone wish list.

The game begins with a solar eclipse that whisks away five couples to a mysterious place called the Ark Arena. A monstrous, robotic Agent gives them clear instructions: They are to fight to the death, only within the Arena, and a refusal to fight is grounds for immediate disqualification (also, death). The winning couple receives immortality and eternal youth.

A few of the captives decide to test the house rules, and five couples quickly become four. At this point, it’s safe to think of the plot as a combination of the Japanese action movie Battle Royale and the NCAA Championship brackets.

You can take control of either one of the game’s two main couples at first, though the other two couples are also unlockable. Before you can fight the other couples, you’ll have to train by exploring lush environments that are accessible through the Ark Arena. These feature random battles with monsters, treasure chests to raid, and a handful of puzzles to solve.

Anyone who has played a recent Final Fantasy game will be familiar with the RPG character progression and basic controls in Chaos Rings. You move through the world with a virtual analog stick that appears wherever you press down your thumb, and when in combat, the turn-by-turn action is all menu-based. Either one at a time or as a duo, you can cast spells (called “genes”), use items, and attack your opponents.

Chaos Rings’ complex gameplay is almost too deep to describe here. As you beat enemies, you’ll gain access to their genes, or abilities that include spells and passive attributes. You can equip three of these genes at a time, and part of the fun is figuring out which genes you’ll need for the battles ahead. For example, a crocodile gene can give you tough skin and the ability to cast water-based attacks.

There are three magical elements: fire, wind, and water, which are strong or weak against each other in a rock-paper-scissors like formation. And finally, as you earn money you’ll be able to buy new equipment from a freakishly funny creature in the Ark Arena named Piu-Piu.

A single play through the game takes about five hours, and then you can replay it to see the story from the point of view of the other main couple on the ship. The story is dark and engrossing, and offers plenty of surprising twists. You’ll battle huge monsters and expert warriors, giving you lots of chances to develop a preferred strategy, and you can increase the difficulty between stages by selecting higher-level enemies.

Chaos Rings handily manages many of the trickier aspects of a hardcore Eastern RPG. You’ll quickly gain the ability to turn off random encounters, for example, so you can fight only when you want to level up. A meter in the corner of every battle tells you which side has the advantage, so you know when to run and when to press home the attack.

Chaos Rings also feels right at home on the iPhone. The game will save automatically when you are interrupted by a call, and you can save at any time when you’re not in battle. It’s a game well-suited for both quick bursts and long, involved play sessions.

All of the attention to detail, masterfully designed gameplay mechanics, and great music and visuals add up to create one of the best iPhone games you can currently buy. It may cost top dollar, but in this case, you absolutely get what you pay for. Chaos Rings is a 3D RPG masterpiece that fully demonstrates Square Enix is still at the top of their game. 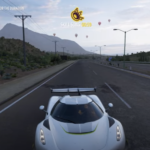 How to Save Game and Quit – Forza Horizon 5
Next Article 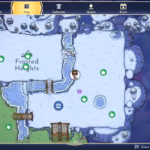