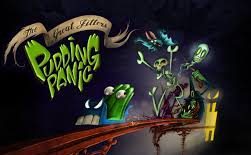 When North Americans talk pudding, we usually mean the cups of chocolate goo that mom and dad would pack in our lunch. However, in the UK, the term “pudding” can refer to any dessert dish, including quivering masses of lime gelatin that travel through broken-down Fun House rides.

If you’ve never tried haunted house-flavored gelatin, make sure you pick up Kunst-Stoff’s Pudding Panic for the iOS. It tastes like puzzles and angry witches, which turns out to be a surprisingly delicious combination.

Pudding Panic stars J. Jitters, a nervous gelatin mold who has somehow found himself ensnared in a world composed of Fun House rides. You probably remember these rides: They’re assembled every summer in the dusty corner of some parking lot. You pay five dollars to ride through the house, hear loud noises and see a stuffed witch. When you roll back to start, you demand your money back. But for Jitters, the buzzing, clangs, and recorded screams that accompany these Fun Houses are a bit too much to take. Therefore, you must help Jitters find his way out of each Fun House level before terror liquifies him.

But it’s not as easy as just riding the rails from beginning to end. You must swap out rails at certain junctions to ensure that Jitters heads towards the exit. At first, this is an easy enough task. As the game progresses, you have to drive by levers in order to lower missing track portions. You also have to mess around with turn tables. And, most importantly, you must eliminate the ghost, goblins, witches, skeletons, and demon-filled “surprise boxes” that scare poor Jitters to pieces.

Luckily, Pudding Panic gives you the means to protect Jitters from the occult. Some of these include a viper punch-glove, a paper bag that slides over Jitters’ head (after all, if he can’t see the bad guys, the bad guys can’t see him, right?), a wind-up rat that bites evil in the butt, and a good ol’ fashioned boost that just propels Jitters the heck out of trouble. Every weapon requires a certain amount of coins to use, and you can find those coins scattered all over the tracks. Every track also has one VIP coupon, and these are your ticket to opening up new worlds and new levels.

Pudding Panic is fast-paced for a puzzle game: Jitters is constantly moving, and he only stops if you pause the game, or if you select a piece of track to lay down at a junction. It’s necessary to think about what piece of track will go down where, but you also have to keep a sharp eye out for the bad guys and dispose of them as necessary. Trick boxes are especially, er, tricky: You won’t realize Jitters is about to run into one until it pops open and scares the daylights out of him.

Pudding Panic’s fast pace suits veteran puzzlers who want a little more out of their puzzle games besides block-breaking and Match-3 action, but keeping up with Jitters as he rolls along can be a bit difficult. Luckily, the game’s “Pudding Cam” will instantly take you to Jitters’ position.

The game’s 3D graphics look fantastic, and are full of imaginative monsters. Is it possible to fall in love with a gelatin man? When you watch Jitters shake slightly as a level loads, you just might. Each level is complemented by spooky backgrounds and funny signs. There are also loads of shrieks and screams, but you might want to turn those off if you’re riding on a bus.

If you’re looking for a puzzle game that’s fun, fast, and original, you’ll eat up Pudding Panic. Its premise alone is a winner. Next time your friends brag about games that pit them against nuclear wastelands or three-headed dragons, gently remind them that you helped a terrified pudding out of a haunted house.